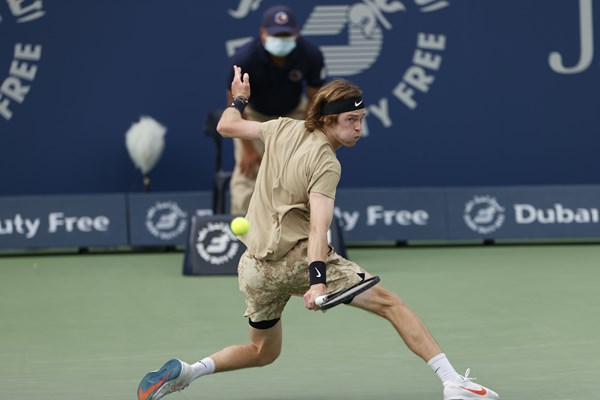 Dubai (Union)
Canadian Denis Shapovalov, ranked third in the tournament and 12th in the world, was able to move to the 16th round of the Dubai Duty Free Tennis Championships, after he eliminated his German counterpart Jan Lennard Struff, the 39th in 62 minutes, in two groups without responding by (6-1) And 6-3).
Shapovalov, who is participating for the first time in Dubai, was feeling desperate when he saw the draw put him in front of the player who lost before him in the last four matches, with his only victory in 2018, but his performance today confirmed his full readiness from the start, and he did not give his opponent room for discussion, and this returns. Significant development to his coach Mikhail Yuzhny, two-time runner-up in the Dubai Championships. The Canadian player will meet in the 16th round tomorrow with the Polish 35th seed Hubert Horkach, who in turn defeated the 49th-ranked Frenchman Richard Gaskey in two groups for nothing, by (6-3 and 6-4) in the match that brought them together for the second round and ended it with Horkach in 69 minutes.
Shapovalov said: “Since my first training session in Dubai I was able to feel the stadium well, I knew that I was going to play a difficult match, especially after a series of losses that I suffered with him, so I knew it would be a difficult match for me, but I feel that any A match is a new match and it always starts from scratch. So the past doesn’t mean much. Of course I played well today, as I was trying to focus on serves, and I was playing the way I was training, as I did not change my game plan compared to the other times I played with him. ”
“Dennis is one of the many players who choose to spend time training in Dubai, because they love the world-class climate and facilities available here, but this is the first time that he is participating in” said Colm McLaughlin, Executive Vice Chairman and CEO of Dubai Duty Free. Championship, and we welcome his decision.
The Russian Aslan Karttsev, the 42nd world seed and the participant in the invitation card, moved to the 16th round after defeating Britain’s 11th-ranked Daniel Evans in the tournament and 28th in the world, at a time of two hours and 24 minutes and by two groups for one group (6-4, 4-6, 6-4), to be Then on a date with Italian Lorenzo Sonigo, ranked 37 in the world, who beat Spaniard Bernabe Zapata Merlis, ranked 150 in the world, with two groups without a response (6-2, 6-2) in an hour and 18 minutes.
The invitation card received by Kartsev to participate in the tournament was a motivation after his participation in the Australian Open, where he won eight matches to move from the qualifying rounds to the semi-finals, but his career ended in this tournament at the hands of the final champion Novak Djokovic. His only other defeat this year came last week in Doha by world number one Dominic Timm, although he won the doubles competition with Andrei Rublev.
Despite the high hopes for the ambitious young Alexei Bobirin, who won the invitation card in the tournament, Karen Khachanov, the eighth seed in the tournament and the 22nd in the world, stopped this march and removed him from the tournament, after a struggle that lasted for two hours and 16 minutes in two groups for one (6 -4,3-6,7-6).
Serbian Dusan Lyovic, ranked 11 in the tournament and 6 in the world, beat Tunisian Malek Jaziri, ranked 258 in the world, in two groups without a response (7-5 ​​and 6-2), Italian Janik Sener, ranked 16 in the tournament and 32 in the world, beat Kazakh Alexander Public in two groups to one (2-6, 7-6, 6- 6). 4).

Doha MotoGP GP 2021: schedule, TV, where to watch and how to watch the Losail race online