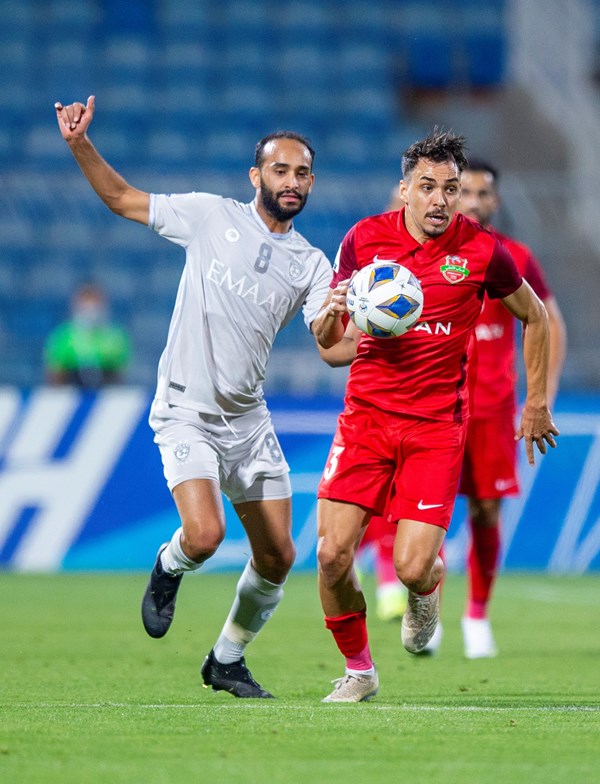 Shabab Al-Ahly lost to Al-Hilal of Saudi Arabia with a clean double in the second round of the AFC Champions League Group A competitions, which was held at Prince Faisal bin Fahd Stadium in Riyadh, both Gomez and Carrillo scored in the 14th and 28th minutes. Thus, Al Hilal leads the group with four points, while the “Knights” stagnates at a point, capping its group, noting that the independence of Tajikistan defeated the Uzbek Ajmak 3-2 and finished second with four points, while the Uzbek team came in third place with a point.

The start of the match came in the interest of Al-Hilal, thanks to the offensive rush and strong pressure on the defense of the “Knights”, where the right front of the Saudi team, led by Muhammad Al-Brik, who led two dangerous chances, then made two goals for his first team in the 14th minute and scored by Gomez, and the second in the 28th minute and was scored by Andre Carrillo. .

The host of the group almost made the difference during the first half thanks to the many opportunities and mistakes made by the Al-Ahly youth defense line. Despite the advantage of Al Hilal, the “Al-Fursan” team was close to shaking the net of goalkeeper Abdullah Al-Mayouf on two occasions through Igor Jesus and Carlos Eduardo, but the haste prevented them from reacting, so the first period ended with Al-Ahly youth being late with a clean double. Mahdi Ali pushed all those who fought Abdullah, Ahmed Al-Attas and Eid Khamis, but Al Hilal’s control continued, thanks to the offensive pressure and good positioning on the field, and had it not been for Majid Nasser’s brilliance in defending his own goal, the result would have been greater than two goals.

The country’s ambassador discusses with an Iraqi official bilateral relations