Shabab Al-Ahly is champion of the Men’s Basketball League 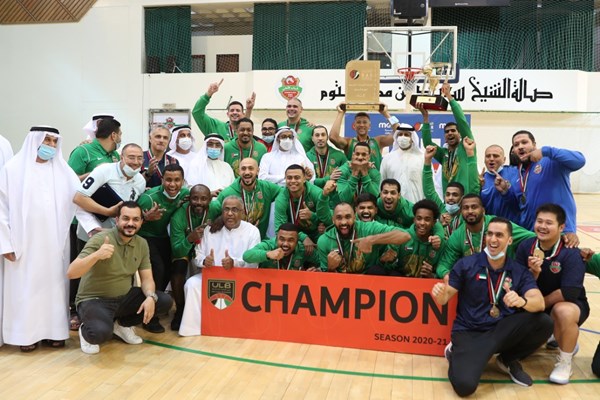 Shabab Al-Ahly regained the basketball league title, after defeating Sharjah in the “play-off match” and the final 81-70, which took place at Al-Ahly Youth Hall, this evening, Saturday, and Major General Ismail Al Gergawi, head of the UAE and Arab federations, and Major General Muhammad Ahmed Al-Marri, Chairman of the Board of Directors of the Group Games Sector at Al-Ahly Youth, and the Board of Directors of the Basketball Federation, with the coronation of “the Knights”.
The match was close to the level, and each team played with its striking power, which made the fun present throughout the “four quarters”, and the result remained close in the points difference between the first and second quarters, until Al-Ahly youth were able to advance 37 – 33, and the Sharjah player, American Taylor, was the most goal-scoring player. In the first half, «17 points».
In the third quarter, the supremacy of the “Al-Fursan” was demonstrated, as it ended the quarter with a difference of 13 points “61 – 48”, through the state of concentration in which more than one player appeared, while the “King” players wasted many opportunities to reduce the difference.
The “Knights” maintained their advance in the fourth quarter, in light of the “King” wasting a number of easy points, to win Al-Ahly youth the title with a score of 81-70, and among the most scoring players, Mike Hendrick, “20 points”, and Brandon Stefan, “19 points”, from Shabab Al-Ahly, in Sharjah, Taylor (28 points), and Michel James (15 points).
The final match was moderated by an international team consisting of Hassan Hajji, Salem Al Zaabi and Costas, and was monitored by international Dawood Al Tamimi.

Jennifer Lopez and Álex Rodríguez deny rumors of their breakup

Do not accompany non-conforming -1-

Lopetegui: “We recovered from the penalty penalty”