Sexual abuse in the Church: the resignation of an influential cardinal, another problem for the Pope 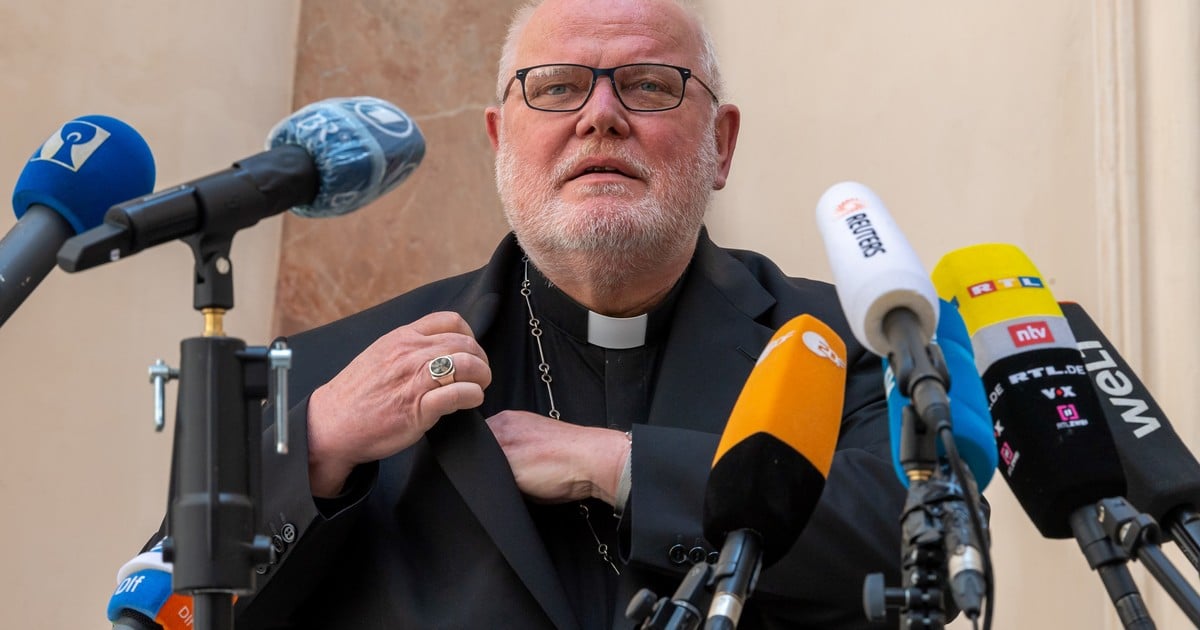 The resignation of the leader of the wayward German church, Cardinal Reinhard marx, Archbishop of Munich, puts Pope Francis in serious trouble, because he affirms that the Catholic Church is in a “stalemate” on the question of sexual abuse.

The influential Marx is also a member of the Council of nine cardinals that helps Francis govern the Church.

“A bomb”, “A missile to the heart of the Church.” The first reactions reveal the magnitude of the decision of Cardinal Marx, in fact leader of the German church, who presented his resignation to the Pope accusing him of “Co-responsibilities in the catastrophe of sexual abuse by clergy in the Church during the last decades ”.

Marx has never been implicated in the scandals that keep the German Catholic world of 22 million faithful in suspense, but the high prelate assures that there have been “many personal failures and administrative errors” but also “institutional, institutional or systemic failures.”

The gesture of the Munich cardinal points very high. He speaks of Germany but “not only”, he indirectly points out the delays and inadequacies, without naming him, in the Vatican itself to thoroughly attack the wave of sexual scandals that since the beginning of the century have become the biggest loss of prestige in the whole Church.

Pope Francis and German Cardinal Reinhard Marx, in a meeting at the Vatican in February 2020. Photo: AFP

“Deadlock” in the Church

According to Marx, “the Church has come to a standstill.”

The Archbishop of Munich points out to the Pope that his resignation may serve as a signal for “a new awakening of the Church.”

“I want to point out that it is not the position that is in the foreground but the mandate of the gospel,” he remarks.

The sex scandals unleashed a deep crisis in the German Church and it was Cardinal Marx, president of the Episcopal Conference until January 2020, who promoted as the only remedy that a binding Synodal Path be carried out, which in two years would take substantive decisions to regain confidence lost by the outraged faithful, who leave the churches half empty and even abandon their very condition as Catholics.

For Francis, the resignation of Marx represents a very difficult problem, because in the first placeIt burdens the Vatican’s confrontation with the majority of the 68 German bishops and the highly organized lay movements, which promote openings in the debates on the Synod Way towards the diaconate.

They also claim the priestly ordination of women, abolition of compulsory celibacy, recognition of gay unions and structural reforms in the functioning of the parishes whose administration would remain in the hands of the laity.

The Pope sent a letter to the German bishops more than a year ago informing them that these issues cannot be decided at the national level, but the response was not dialogue but silence.

Jorge Bergoglio responded to Cardinal Marx’s resignation by authorizing him to make the text public and told him to continue as archbishop of Munich, one of the most important, until he makes a decision.

The scandals over the accumulation of cases of sexual abuse against minors in the Church, a headache for Francisco. Photo: EFE

The center of the crisis is the archdiocese of Cologne, the largest and richest. Cardinal Archbishop Rainer María Woelki is the most important member of the episcopal minority that opposes the Synod Way and denounces the danger of a schism that would lead to the creation of a National Church of Germany separated from the universal church.

Woelki stumbles, weakened by his performance in the investigations of sexual abuse of members of the clergy in Cologne, despite the fact that he was exonerated of responsibilities because he assumed command in 2014.

His two predecessors, cardinals now deceased, are considered guilty of the concealment of the atrocities of pedophilia committed.

Yet Cardinal Woelki himself is suspected of doing the same. He had a report drawn up and when the results showed a terrible past, he covered the matter up.

As the protests escalated he ordered another report that confirmed the existence of 314 cases of sexual abuse of minors and identified 202 alleged perpetrators, the vast majority priests.

The document claimed that senior church leaders knew of the sexual abuse cases but violated their duty to report and act.

In 2018, a report commissioned by the Church concluded that at least 3,677 Catholics suffered sexual abuse by priests between 1946 and 2014. More than half of the victims were 13 years old or younger and a third were altar boys.

The Cardinal of Cologne, Germany, Rainer Maria Woelki, singled out for covering up abuses. Photo: EFE

In his March report, Colonia Cardinal Woelki admitted that in the archdiocese there was a “Systematic cover-up”, “Chaos” and “a system of silence, secrets and lack of control.

He later acknowledged that he made “mistakes” and apologized, while accusations grew that Woelki participated in the tradition of concealment, transfer of the guilty in the most serious cases and other measures applied throughout the centuries throughout the Catholic world “for the good of the Church” and “to avoid scandals” that will damage your image.

Pressure from public opinion and the bishops led the Pope on May 28 to form an apostolic commission to investigate abuse cases and analyze “eventual errors” of the cardinal archbishop.

The two main apostolic visitors are already in Cologne and will remain there until the middle of this month, as it transpired.

They are the Cardinal Archbishop of Stockholm, Andres Arboleius, and the Bishop of Rotterdam and President of the Episcopal Conference of the Netherlands, Johannes von der Hende, according to the apostolic nunciature in Germany.

The commission must study the debatable behavior of the resigning Cardinal Archbishop of Hamburg, Stefan Hesse, when he was part of the Archdiocese of Cologne.

He will also investigate the conduct of the auxiliary bishops of Cologne, Dominikus Schaderlapp and Ansgar Puff.

Pope Francis led a historic summit of bishops in February 2019 on the sexual abuse scandals in the Church. Photo: AP

The findings of the investigation may further weaken Cardinal Woelki’s position and lead him to resign.

The disaster that the sex scandals have caused in Germany and that were the engine of the birth of the Synod Way that can cause a schism, multiply the rebellions between bishops and laity, such as the decision to organize on May 10 a day of blessings to homosexual couples in a hundred German parishes.

This was the response to the decision of the Congregation for the Doctrine of the Faith, authorized by the Pope, to affirm that the Church “cannot bless sin.”

The climate between the Vatican and Germany is getting thinner. Cardinal Marx’s decision to resign receives strong support from Catholic public opinion.

Columnist Christoph Strack wrote: “Finally someone stepped in and made it clear that something has to change in this Church. First in terms of how to address the issue of sexual abuse (an open wound), of those affected and of the structures that promoted the abuse and continue to do so ”.

For a Church of the people, “it is not only about the form that the ecclesiastical institution will take in the future, but also about knowing if the Church has a future,” he said. And he concluded: “People are still waiting.”