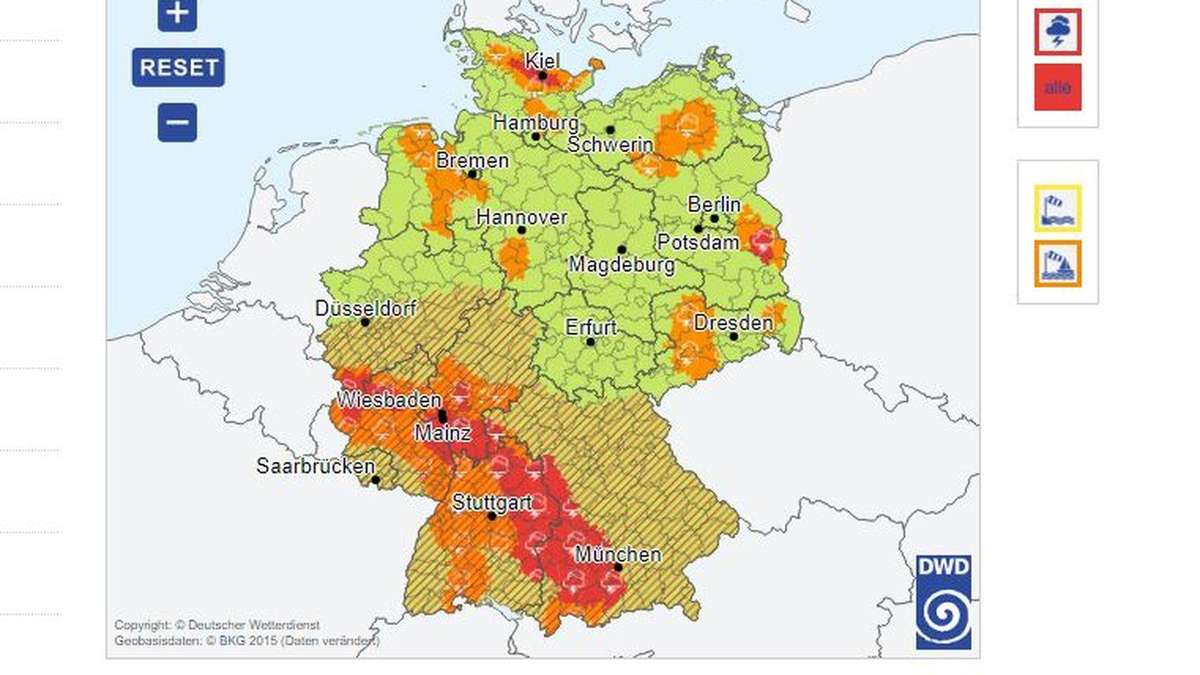 The threat of storms for Germany is increasing again: In numerous regions, heavy rain, thunderstorms and hail are expected. Strong warnings apply.

Update from June 29th, 5.30 p.m.: The storms that hit Germany on Tuesday afternoon have now paralyzed parts of the rail traffic in the south. As reported by Deutsche Bahn, there are disruptions on the routes between Ulm and Augsburg, Munich and Lindau, as well as Ravensburg and Lindau. Individual trains can be canceled or diverted. Considerable delays are to be expected. In the regions of Munich and Augsburg, among others, there were sometimes heavy thunderstorms in the evening.

Weather in Germany: Severe weather map is colored red, especially in the south

Update from June 29th, 4:30 p.m .: Cautious sigh of relief in northern Germany: the level 4 storm warning on the Baltic Sea (see first report) has been repealed. However, a level 3 warning still applies in the region around Kiel. Severe thunderstorms, heavy rain and hail continue to occur.

In the south of the Federal Republic of Germany, a number of regions are also colored red. A level 3 storm warning also applies from Rhineland-Palatinate via Baden-Württemberg to Bavaria. In isolated cases, for example, trees can be uprooted and roofs damaged. Look for cascading branches, Roof tiles or objects. Flooding of cellars and streets as well as local flooding of brooks and small rivers are possible. “

First report from June 29th, 3 p.m .: Munich – The risk of storms in Germany is not decreasing. In the night from Monday (June 28th) to Tuesday (June 29th) the weather chaos in the Federal Republic already caused flooded cellars and streets. In Baden-Württemberg, among others, the fire brigade and police were in constant use.

Unfortunately, the all-clear cannot be given on Tuesday afternoon. The German Weather Service (DWD) is now again warning of severe thunderstorms that are approaching from the south. Some of the weather service’s warning cards are already colored in alarming red.

Weather in Germany: Heavy thunderstorms with hurricane gusts are approaching – extremes in the north

For example, official level three storm warnings apply to south-west Germany for severe thunderstorms with gusts of wind, heavy rain and hail. The hurricane-like gusts can occur at speeds between 90 km / h (25m / s, 48kn, Bft 10) and 110 km / h (31m / s, 60kn, Bft 11), according to the warning, which currently applies until 5.30 p.m. (As of Tuesday, June 29th, 3 p.m.). Baden-Württemberg is particularly affected, including the greater Stuttgart area and parts of Rhineland-Palatinate.

But the severe weather warnings also apply in other regions. In the very north of the Federal Republic of Germany there is now even a warning of “extremely severe storms” of warning level 4. Even if the circle in which the warning applies only appears small on the map – great caution is advised in this area. The heavy rain could be “extreme” in Schleswig-Holstein around Kiel in the Baltic Sea region, it is said. Level 3 warnings also apply to parts of Lower Saxony near Aurich and Wittmund.

On the other hand, there is hardly any prospect of improvement in the weather. The weather service has already issued a new advance warning for southern and central Germany. Severe thunderstorms are expected from Tuesday 5 p.m. to Wednesday 1 a.m. (nema)