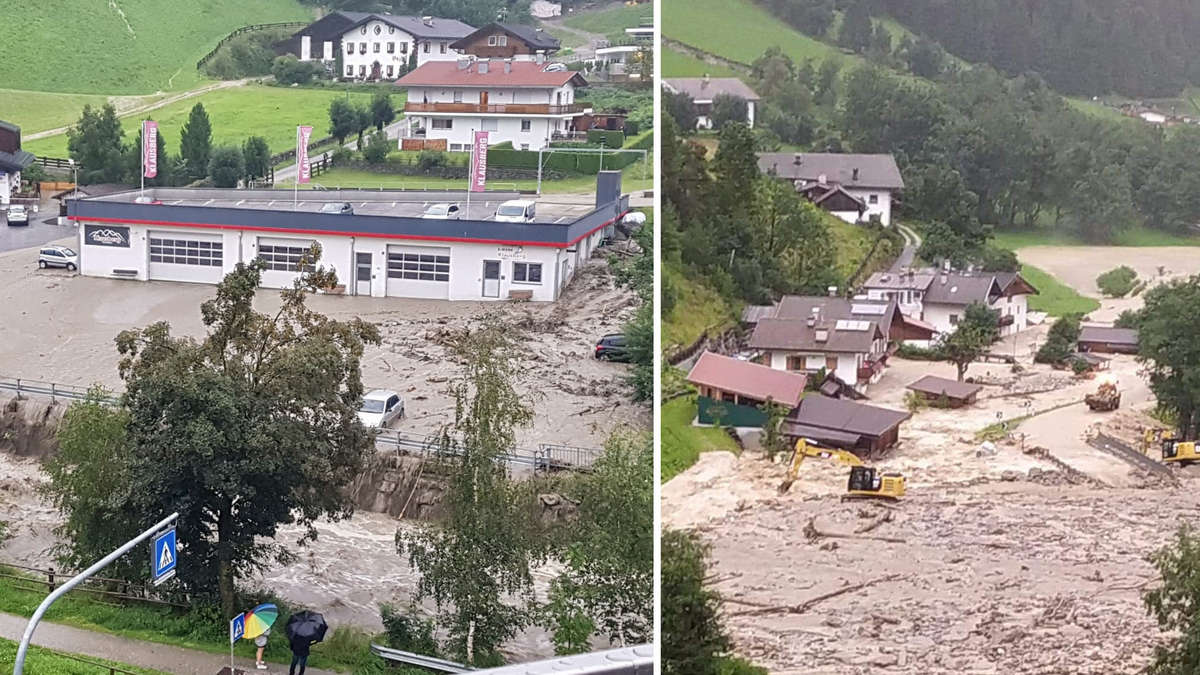 Northern Italy was hit again by severe storms with masses of water, hail and violent squalls. The situation was particularly critical in South Tyrol.

Bolzano – It all happened very quickly. Rivers turned into torrential floods, trees fell and mudslides came down. In addition, mudslides endangered several houses. A cold front over South Tyrol caused severe thunderstorms with hail and storm on Monday. According to their own statements, the fire brigades in South Tyrol had to move out more than 200 times from 5 p.m.

In the Brenner region, the Fleres river has burst its banks in several places. Masses of water washed over the streets. Tributaries also swelled. The civil defense asked the population in the communities Ahrntal and Pflersch to stay in their homes. A Twitter video shows how dramatic the situation was. Emergency services work with excavators at night on the Pflerscherbach.

#APPLICATION INFO: FF Pflersch -16.08.21 -The Pflerscherbach has overflowed its banks and has caused numerous damage. The population is encouraged to stay in the buildings and avoid creeks. Numerous volunteer firefighters are on duty for your safety! pic.twitter.com/5aPfNf2gSi

After the heavy storms, the situation in the Ahrntal is under control again on Tuesday, according to the emergency services. The damage is now examined in daylight. The clean-up is in progress. Heavy equipment is used to clear the streets of debris and uprooted trees.

Hail fell and strong winds blew over the area north of Sterzing on the border with Austria. The South Tyrolean weather service registered very heavy rainfall of around 86 liters per square meter within 24 hours.

Storms are raging in Italy

The storms also spread over the regions of Veneto, Friuli-Venezia Giulia, Lombardy and Emilia-Romagna. According to their own statements, the fire brigades deployed there around 570 times due to the weather. In the area around the village of Sonico, just under 100 kilometers north of Brescia, the Oglio river flooded streets and blocked cars. According to the information, no people were harmed in the storms in northern Italy.

The weather in Italy is extreme this summer: In northern Italy a gigantic hailstorm swept across the country at the end of July. Hail the size of tennis balls thundered from the sky. A “water avalanche” devastated entire cities on Lake Como.

In the meantime, the extinguishing work in the fight against the forest and bush fires continues in southern Italy. Especially in Sicily, with the exception of one province in the northeast, the highest forest fire warning level was applied on Tuesday. In the south, drought, heat and strong winds keep giving the flames a breeding ground. Fire-fighting planes are also used in many places on the large islands, in Calabria on the southern tip of the mainland or in Lazio, where Rome is located. According to information from Monday evening, the civil protection authority has counted more than 1000 requests for fire extinguishing support from the air since mid-June. (ml with material from dpa) * Merkur.de is an offer from IPPEN.MEDIA