Sergio Berni, on Cristina Kirchner: ‘I discuss with the vice president, I go with my ideas and I return with hers’ 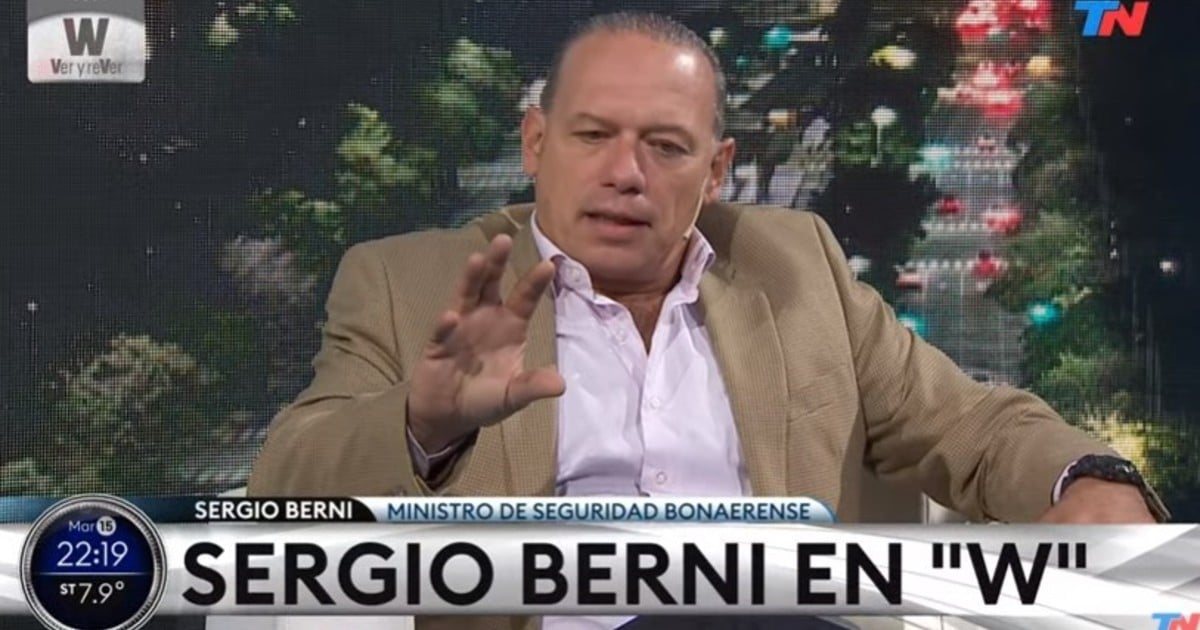 The Buenos Aires Minister of Security, Sergio Berni, spoke about his role within the Frente de Todos, saying that he is “official but not obsequious “ and that he has many discussions within the political space, although his free will seems to have a vertical limit: “With Cristina I also discuss, I go with my ideas and I come back with hers“, I agree.

The official described himself as “a loyal person”: “I am not a traitor“, he said in contrast and continued:” I can give myself the pleasure to disagree. I resist any file“, he asserted.

In dialogue with the TN channel, Berni allowed himself a self-referential interview in which he was proud of his past: “In 33 years I was always in the same place. Others came and went, it is neither good nor bad, I just say what happens “.

Asked about who he was referring to he preferred not to answer. It is not the first time that Axel Kicillof’s minister has launched phrases that are applicable by elevation to President Alberto Fernández.

Then he said that he has many discussions within the political space of the Frente de Todos: “But nobody challenges me“.

Regarding Cristina Kirchner, he said, with a certain hint of admiration: “I discuss with the vice president, I go with my ideas and I return with theirs. That’s a leader, a leader convinces“.

Days ago Berni struck down President Alberto Fernández for the controversial phrase that “the Argentines came from the ships,” which offended representatives of native peoples and led to endless criticism.

“It seems to me that, beyond being excused, I am one of those who believe that it is impossible to know who we are and where we are going if we don’t know where we come from“, he started.

“Being a national, as Jauretche described it, is a mixture of Creole, indigenous and foreign blood, that has nothing to do with that phrase that they have come down from the ships“, Shooting.

Finally, he said that “beyond that, whether or not it was an outburst, for us it has a strategic perspective, because we cannot know where we are going. if we don’t know where we come from“, he reiterated.

In the last hours a video was known in which the Minister of Security put him voice and guitar to a tribute to the fallen in the Malvinas war, on a new anniversary of the war.

The Bonarense official chose the chamamé “Los Ramones (de mi patria)”, by the singer-songwriters Julián Zini and Mario Bofill, for “the compatriots who gave up their lives.”

In commemoration of the end of the Malvinas war, a sincere tribute to the compatriots who gave up their lives.
That is why I say to the winds, and if I say so, I take my bank, that our Falkland Islands are and will be Argentine! Long live the homeland, boys!https://t.co/i1F0RWIlxD

The result: a video clip of 5 minutes and 39 seconds, recorded on Bridge 12, of the La Matanza district, which Berni himself uploaded to social networks.

“I still listen to the theme and My skin bristles. He is a beautiful chamamé who pays a nice tribute to those who went to defend the sovereignty of the Malvinas, “he said.

Regarding the statements of some opponents who classified the clip as an opportunistic ploy to campaign for politics, the minister said that “the only campaign in which I am engaged it is in the vaccination campaign“.

Does Berni consider himself a good guitarist? “I play as a team and I surround myself with the best, “dodged the minister aligned with Cristina Kirchner.