School changes Children are declining, will education be saved through cooperation between municipalities? All parties support it, but state funding does not encourage it 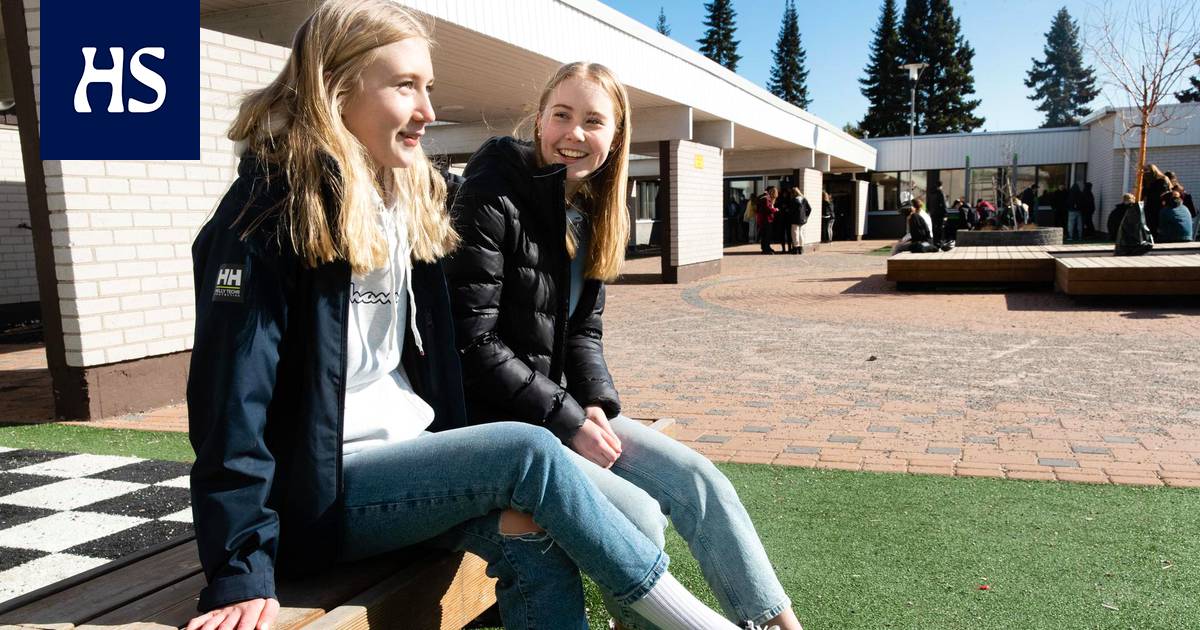 One solution to reducing student numbers with declining birth rates may be co-operation between municipalities. Either students or teachers can move across the municipal boundary. All parliamentary parties are in favor of increasing municipal co-operation in basic education, but state funding now does not encourage it.

In Mäntsälä there are two high schools, but some students attend upper classes on the side of the neighboring town of Tuusula.

“We woke up to a decrease in the number of students in the area of ​​Hyökännummi Primary School, which is about 20 kilometers from the upper secondary school in our own municipality. However, a unit school of grades 1–9 was built right on the Tuusula side, where you could go. Now the fourth school year is underway, so we already have all three age groups there, ”says Mäntsälä’s acting. director of education Janne Mäkinen.

School trips are getting shorter, and schoolchildren and their parents have been happy to work together. Mäntsälä and Tuusula also have a common teacher pool.

There is a difference in the curricula of municipalities, for example, in the provision of languages.

“It is possible for us to offer language clubs in primary school, where you can prepare for the upper secondary school’s language program,” says Mäkinen.

According to Mäkinen, the promotion of co-operation with Kärkölä, for example, is also being prepared.

Lotta Härkönen (left) and Menni Andelin, 9th graders of Kellokoski School, have visited Tuusula in their secondary school from their home in Mäntsälä. “I can’t think of cons,” says Härkönen, crossing the municipal border. “A small change of landscape would do good,” Andelin explains the intention to head to Järvenpää for high school, which is also what Härkönen is planning.­Picture: Juhani Niiranen / HS

Inter-municipal cooperation is one of the ways to solve the difficult problem of the declining birth rate for basic education.

In recent years, almost one hundred children in Finland have been born in almost a hundred municipalities. In the next few years, the decline in the number of schoolchildren will shake the entire Finnish school system.

“If you can still live where you want in Finland, the really big question is how everywhere children can receive high-quality, basic education in accordance with the curriculum,” said the director of the Finnish Association of Local Authorities’ educational and cultural unit. Terhi Päivärinta In an interview with HS in February.

“The massive problem is that the number of students is declining the most in areas where distances are long and regional accessibility is often already critical,” said the migration researcher in the same article. Timo Aro.

Read more: Finland’s acclaimed school system faces a “massive problem”: What to do when there are no children in many municipalities compared to any school class?

Basic Education Act according to the teaching should be organized so that the trips of the students are as safe and short as possible. However, many municipalities want to stick to their own school.

There is some co-operation between municipalities, but it is more common for municipalities to compete for attraction and families with children, ie also for new pupils.

All parliamentary parties are in favor of increasing co-operation between municipalities in basic education, according to an HS survey.

State today, there is no way to encourage municipalities to work more closely together, such as through funding, but the situation may change.

“Funding is one of the instruments of state control, so if so desired, the state contribution can at least be used to encourage municipalities to co-operate. State funding for education must be reformed as a whole after the entry into force of the SOTE reform in the next government term, so the issue is topical, ”says the municipal economics expert Sanna Lehtonen from the Ministry of Education and Culture.

It also has no effect on the kind of basic education school network in the municipality, Lehtonen says.

For example, in the agreement between Mäntsälä and Tuusula, the money does not move, but the costs are covered by state contributions.

There are ping pong boards in the yard of Kellokoski school. In the scent of the game Lotta Härkönen (left) and Menni Andelin.­Picture: Juhani Niiranen / HS

In the storm has never had his own high school.

So the cooperation with Orimattila is an obvious pattern, which started already in 2014, says the principal of Myrskylä Kirkonkylä school Vesa Karjalainen.

In addition to pre-school education, Kirkonkylä School has primary school grades 1–6. For upper grades 7–9, students go to Orimattila, with which Myrskylä has a contract.

Swedish-speaking students in a bilingual municipality attend the entire primary school in Loviisa, with which Myrskylä also has an agreement.

According to Karjalainen, the experiences of cooperating with Orimattila are good. The current curriculum has also been prepared in co-operation with teachers in both municipalities.

“Not all students go to Orimattila Secondary School, but someone may always go to Askola, Porvoo or Anna Tapio School in Pälkäne. The reason is often a more suitable location for the school, for example along the guardian’s commute, choice of subjects or the school’s operating culture, ”says Karjalainen.

Myrskylä, with less than 2,000 inhabitants, is building a new log school with its gyms, but it will also be turned into a primary school for only about 150 students without upper grades.

“After the survey, we came to the conclusion that the population base for high school is not really enough. Teachers would also have difficult subject combinations and the school’s functionality would suffer, ”says Karjalainen. The school will graduate next fall.

“The new log school has already aroused the interest of parents of children in nearby municipalities. After all, a peaceful and safe rural school may increase the attractiveness of Myrskylä, as teleworking has also become more common, ”Karjalainen ponders the possible reversal of the flow of residents and students to Myrskylä.

According to Hyttinen, educational co-operation began even before, for example, municipal administration was merged in social and health services and technology.

“Visual arts, Russian, German, music, Finnish as a second language. . . “Hyttinen lists subjects where it would be difficult to complete the teaching obligation of qualified teachers in individual schools.

According to Hyttinen, the use of common or rotating teachers and the construction of reading schedules is made possible by the fact that the distance between schools is at most ten kilometers, so teachers have time to move from one school to another during breaks.

“The wigs of Kainuu in small municipalities must be far-sighted so that the teaching is of high quality and nothing semi-woolly.”

In Kainuu Ristijärvi and Hyrynsalmi have long utilized each other’s subject teachers, such as teachers of mother tongue, geography and biology, as well as social studies and history. Admittedly, this year the use of shared teachers is on hiatus, and future collaboration is being reconsidered.

Another way to ensure quality teaching is to recruit the widest possible range of teachers. The ideal is teachers who are qualified to teach both preschoolers and high school students, thus coping with fewer people.

“The wigs of Kainuu in small municipalities must be far-sighted so that the teaching is of high quality and nothing semi-woolly,” says Ristijärvi’s education manager and the principal of the Central School. Tiinaliisa Portano.

There is also co-operation in school management with other municipalities. For example, a school curator and “swordsman”, ie a mental health nurse, visit Ristijärvi from Suomussalmi and a school psychologist from Kajaani. The school nurse is shared with Paltamo.

Ristijärvi and Hyrynsalmi do not have their own high school, but they go to Kajaani, Sotkamo or Paltamo, for example, Portano says.

“That’s how we get a qualified teacher on both sides.”

For long distances in Lapland, each of the 21 municipalities still has its own primary school. Although village schools have been closed down due to a lot of trade, new ones are also being built, because in northern Finland school buildings are mostly old and already on their way, especially due to indoor air problems.

Then a new, healthy log school can be a significant incentive to change.

For example, a nice multi-purpose building with schools was completed in the Seal of Rovaniemi a couple of years ago, which also attracts families with children from other municipalities.

Although “school shopping”, ie the choice of a nearby school other than the one for children, has been talked about mainly in the big cities of the south, it is not quite a strange phenomenon in Lapland either.

Also At the beginning of the year, Pello Primary School entered a brand new building named Meän Opinahjo Ahjotie. In addition to basic education, the same house has facilities for early childhood education and high school.

“Yes, surveys of student places in Upper Lapland have already rained down next autumn. Let’s scratch the head where all the students would fit, ”Pello, the principal of basic education and high school, thinks. Piia Kilpeläinen-Tuomo.

Pello has been cooperating with Ylitornio for years.

Pello is also planning to utilize cooperation and remote connections in language teaching.

■ According to Statistics Finland, there were 2,130 primary schools in Finland at the end of last year, with about 550,000 pupils.

■ On the other hand, the number of integrated schools, ie large schools with all grades 1 to 9, has already risen to almost 500.

Coronavirus The corona situation is now easing almost all of Finland, in the western North the infection curve is rising – the graphs show the situation in different regions