Scholarship holders march in favor of the vote printed in Brasília 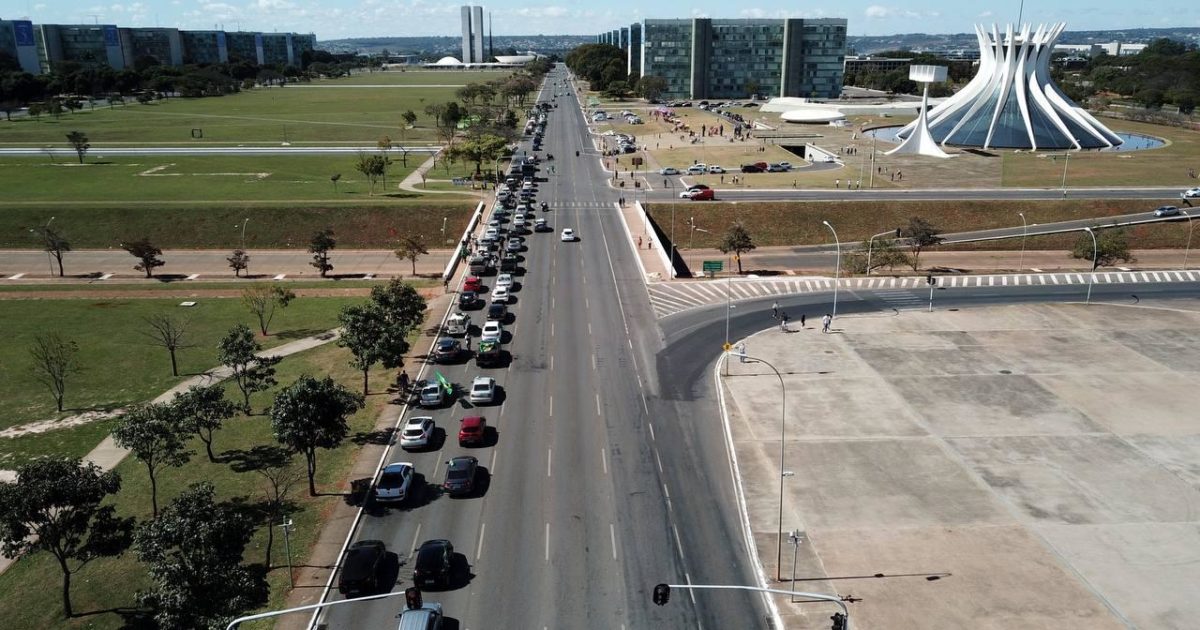 The demonstration in favor of President Jair Bolsonaro (no party) and in favor of the printed vote was attended by around 200 people and 150 cars in Brasília this Sunday (June 27, 2021).

In a truck, at the microphone, one of the organizers of the event said that the low concentration of people happened because of a sporting event in Brasília. That would have disturbed the crowding of people.

The demonstrators gathered in front of the Conic building, on the Monumental Axis, where a motorcade was scheduled to start at 10 am.

At 10:04 am, 3 protesters with T-shirts and flags from Brazil and Israel shouted “Lula in jail. squid thief”. Immediately, 4 men on the other side of the Monumental Axis replied: “And Bolsonaro goes with it”.

The gathered protesters had a loudspeaker on the spot with songs in favor of the president. “Bolsonaro is our president, let’s forget the past and make Brazil grow”.

At 11am, protesters went to a group prayer and listen to the National Anthem. They also had banners of protesters asking the “public vote count”. Event organizers would distribute flyers with the message: “we want the public counting of votes and not the hidden ones”.

See images recorded by the photojournalist of power360, Sérgio Lima:

The demonstration was scheduled for 10 am in the federal capital Sérgio Lima/Poder360 – June 27, 2021

Participation was small in the demonstration by the printed vote and by President Jair Bolsonaro (no party) Sérgio Lima/Poder360 – June 27, 2021

MOTORCYCLES OF THE PRESIDENT

Bolsonaro has organized and participated with supporters in political acts known as “motorcycles”. The last one was held in Chapecó (SC) on Saturday (June 26). Bolsonaro, like most of those present, wore no mask.

This was the 4th event of its kind that Bolsonaro promoted in recent months. The 1st was in Brasília, on May 9, when the president left the Alvorada Palace on his motorcycle at around 9 am and toured the streets of the federal capital accompanied by hundreds of supporters.

The 2nd was in Rio de Janeiro on May 23rd. The president found supporters in Barra da Tijuca.

The 3rd was in São Paulo, on June 12, when the tour gathered 6,661 motorcycles, according to the system that records the passage of vehicles at toll booths, monitored by Artesp (Transport Agency of the State of São Paulo).

PROTESTS OF THE OPPOSITION

On the same day as “motorcycle” from Bolsonaro in Chapecó (SC), some protests against the president took place in at least 3 cities in Santa Catarina. The acts brought together students, social movements, members of entities and opposition parties, but did not have the adhesion of the 2 previous protests.

The 1st was on the last Saturday of May (29.May). At least 213 cities in the country and 14 abroad, according to estimates by the organizing movements, received demonstrations.

The second was on June 19, the day Brazil registered 500,000 deaths by covid-19. Thousands of people took to the streets of 26 states and the Federal District to charge for agendas such as accelerating vaccination, protecting indigenous peoples, valuing health and education in the country.

On Tuesday (June 22), social movements, left and opposition had scheduled new protests for the 24th of July. But the actions against Bolsonaro were brought forward to next Saturday (3.jul). The anticipation comes after suspicions of corruption in the negotiations for the purchase of the vaccine against covid-19 Covaxin by the federal government.