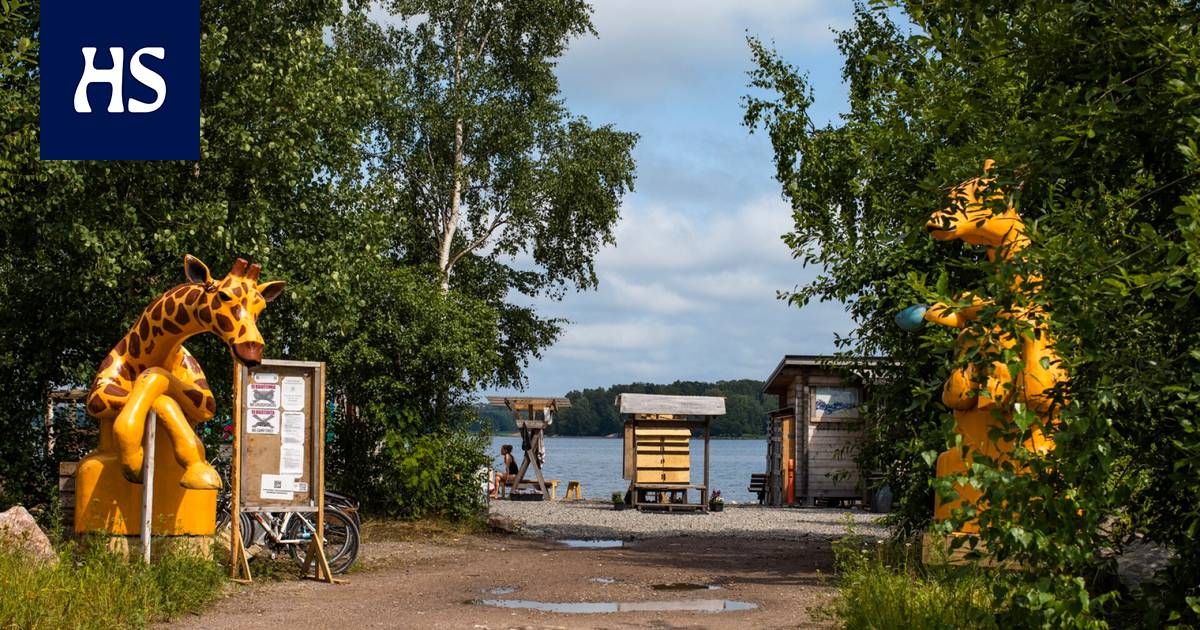 “If you want the saunas to be warm, then take water with you and make the trees,” says Jani Lindqvist, a founding member of the Sauna Society.

This is how the active and founding member of the Sompasaunasea describes his mood Jani Lindqvist.

Sompasauna opened this week in its new location in Hermanninranta. According to Lindqvist, there is a large amount of permission to clear and organize things, but he thinks the end result is good.

Agrees Keijo Lehikoinen, which is also a member of the board of the club.

“We had such a basic premise that it was thought that going anywhere would be worse than the previous place,” Lehikoinen says.

Jani Lindqvist has been involved in the sauna since the beginning. Picture: Emilia Anundi / HS

Eventually A small strip of Hermanninranta was chosen as the new location for Sompasauna.

The place is between Kyläsaari and Verkkosaari. The environment is practically an industrial area and a construction site, but the new Sompasauna hides in a shelter surrounded by birches.

“This is a really great and awesome place,” Lehikoinen says.

Keijo Lehikoinen is satisfied with the new location of the sauna. Picture: Emilia Anundi / HS

Sompasauna received departure passports from its previous location in Sompasaari in June. The reason was that housing construction began in Nihti, on the southern tip of Sompasaari.

Lindqvist says that Jätkäsaari, for example, was also considered a new place. However, in his opinion, Hermanninranta is more close to nature, and the old location is only a couple of kilometers away.

Sompasauna was built in 2011 in the then deserted Sompasaari harbor area.

The sauna has become a visible part of Helsinki’s urban culture. In 2015, it was awarded as a cultural act in Helsinki, and he has also written about the place, for example British newspaper The Guardian.

The activities are financed by donations and membership fees, and the maintenance of the sauna has been handled from the beginning by volunteer work.

According to Lindqvist and Lehikoinen, the enormous growth in the popularity of the sauna began to erode at some point. Now they hope that the new place will once again take a more communal approach to maintaining the sauna. In a sompa sauna, it means, for example, participating in making logs.

“We hope you don’t come here with the attitude that others take care of things. But it would be understood that this is a community activity. If you want the saunas to be warm, then take water with you and make the trees, ”says Lindqvist.

Sauna-Active according to the goal is also that the environment of the sauna in the new place would remain calmer than in Sompasaari.

“There was often an extra crowd coming in, and there might be campfires around. Now it has been agreed with the city that lighting a campfire is forbidden here, ”says Lehikoinen.

There is a sign in front of Sompasauna, where, in addition to lighting the campfire, the speakers are marked as prohibited.

According to Lehikoinen and Lindqvist, playing music was not an actual problem in the past. However, underground parties were often held in and around Sompasaari, the noise of which was combined with Sompasauna, even if it was not about listening to the music of the saunas.

According to Lehikoinen, acoustic music can be practiced at Hermanninranta, and there is already an acoustic piano in the yard.

“But not like bringing a big speaker and playing it.”

Saunaing is strongly about sauna peace, and its activists hope to survive.

“Such a vague side activity, it is hoped that it will be stopped,” Lehikoinen says.

The saunas, introduced to Tob and Alex, enjoyed the ocean on a hot Thursday afternoon. Picture: Emilia Anundi / HS

Tiia Virtanen went for a dip in the sea many times. He has visited the new sompa sauna a few times. Picture: Emilia Anundi / HS

The new facilities of Sompasauna are in Hermanninranta, just over a couple of kilometers from the old place. Picture: Emilia Anundi / HS