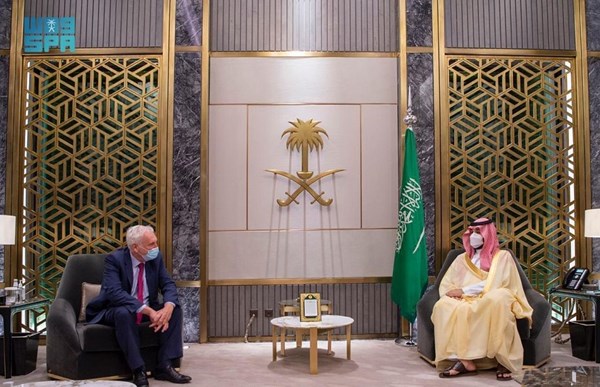 Prince Mohammed bin Salman bin Abdulaziz, Crown Prince, Deputy Prime Minister and Minister of Defense, met today the Special Envoy of the British Prime Minister for the Gulf Region, Edward Lister. According to the Saudi Press Agency (SPA).
During the meeting, they reviewed bilateral relations between the two friendly countries and opportunities to enhance them, in addition to discussing regional and international events of common interest.
The meeting was attended by Prince Khalid bin Bandar bin Sultan bin Abdulaziz, Ambassador of the Custodian of the Two Holy Mosques to the United Kingdom, His Highness Prince Faisal bin Farhan bin Abdullah, Minister of Foreign Affairs, and His Excellency the Minister of Trade and Minister of Information in charge Dr. Majid Al-Qasabi, as well as the British ambassador to the Kingdom, Neil Crompton.