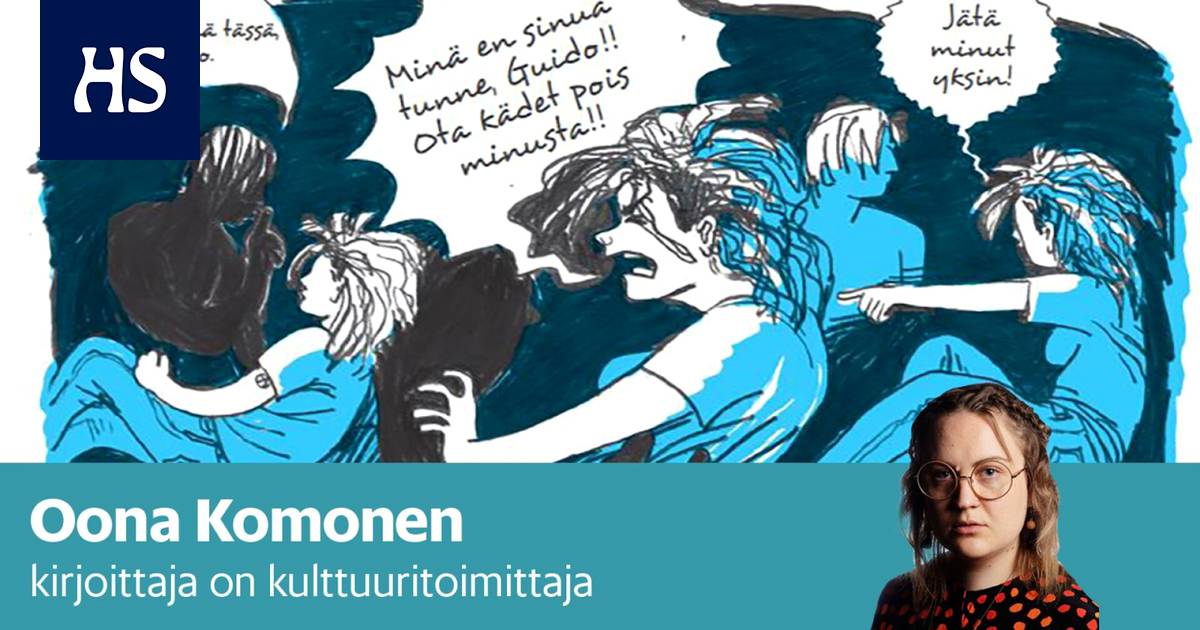 The autobiographical cartoon, which has grown in popularity in recent decades, is also suitable as a tool for dealing with serious subjects.

In that box a woman wakes up in contact in the middle of the night on a Sicilian beach. He asks the man to disappear, begging to let go. A woman would like to sleep.

But the man refuses.

You are so beautiful, the man says. You can’t sleep alone. The man thinks the woman is funny and cute, “pretty wild cat”.

“Look, my egg is pretty hard.”

Woman shouting for help. Nobody helps.

After the rape comes fear, and then anger. Pain and shame. Eventually, the woman wants to disappear from view. All that remains is an outline.

The scene is Berliner Ulli Lustin from a cartoon work Today is the last day of the rest of your life (2009, Finnish Hannele Richert, 2013). It deals with femininity and sexuality through gendered power and sexual violence. When published, the work brought the previously unknown Lust to the attention of the general public in Finland as well as internationally. It has received several industry awards, and translated into more than ten languages.

The autobiographical cartoon takes place in the 1980s. Two 17-year-old Viennese girls travel to Italy without a passport and money. On the way, the protagonist-narrator Ulli and his friend Edi meet new people and gain experiences – that was the intention.

However, some are things Ulli never wanted.

Sex becomes a barter for a place to sleep, a ride or food. The men do not listen to the prohibitions and do not respect Ulli’s right to self-determination. In the world of the work, man is a functioning subject, a usufructuary to whose desires a woman must submit.

No gender is not, in principle, considered to be violent or, as the case may be, subject to violence. Still statistical fact: Globally, gender inequality is still strong. Despite progress, women and girls in particular, as well as those belonging to minority groups, face discrimination.

And like Sanna Karkulehto and Leena-Maija Rossi state in the book Gender and violence (2017), it is also clear that gendered and gendered hatred as well as violence and its realization in forms such as misogyny, homophobia, racism, and sexism are constantly allowed and normalized in societies.

The prevalence and mundaneness of various forms of sexual violence is an expression of missing human rights, writes Suvi Ronkanen Crying age all? Writings about woman, power and violence in his article in The power of violence (2002). The social, economic and cultural status of women is not on an equal footing with men – still. Men have more power and rights in the way that radical feminism in the 1970s described oppression and subjugation.

Perhaps that is why the crucial question is how experiences of violence and inequality can be structured.

Lust’s solution is an autobiographical cartoon – and he’s not the only one.

Autobiography has risen to in recent decades as one of the most prominent comic book genres. Development is considered to have begun in the 1960s. There began to be opposition to the conventions of the comic book industry: mainstream and censorship. Comics became politically radical. They dealt with topics previously considered taboo: drugs, sexuality, mental health.

Comic book production was – and is – a male – dominated industry, though there have been women included from the beginning. With the rise of the feminist movement in the 1970s, women’s factors became more prominent. They opposed by many the sexist female image of the artists, and brought to the fore violence, rape, abortion against women through their work.

Cartoonist Enter the Mountain in particular, feminist and postcolonial research highlight the potential of autobiographical comics in strengthening the rights of subjugated groups and minorities. Likewise has stated investigator Hillary Chute: Visualization can bring out silent topics. Well-known examples are Art Spiegelman dealing with the Holocaust Maus (1980-91), Joe Saccon a cartoon report on people living in the Palestinian territories Palestine (1993), and Marjane Satrapin describing childhood and youth in Iran Persepolis (2000–2003).

Lustin Today is the last day of the rest of your life describes the gender gap.

At the beginning of the work, the main character Ulli adapts to the men’s dominance, albeit often reluctantly. As the journey progresses, men’s behavior becomes more aggressive.

Ulli tries to come up with ways to combat harassment, such as transforming into “like a man”. She washes her makeup, runs down, bends her legs to the ground.

“It’s exactly the same as what I look like and what I say. I’m just a two-legged hole with two swinging sides. […] And when the hole lies down, anyone can poke it in. ”

Researched Lust’s work Anna Vuorinne compares the comic to the # metoo campaign that started in October 2017. Both seek to raise the profile of sexual harassment and violence against women and to dispel the culture of silence. At the start of the campaign, Ulli Lust commented on social#metoo Told it already in Comics, ”Referring to his comic book.

However, the campaign has been criticized: it leaves the responsibility for speaking to the victims.

When expectations of changing predisposing behavior are pushed to the victims, the power of violence is strengthened and the actions of another are justified. The ways of understanding associated with violence also construct an image in which the person in power is more valued than his victim. He is active, scary, powerful. Not passive and weak.

Thus, breaking the culture of silence is not enough for social change if the discussion is only between the victims, Vuorinne suggests.

Therefore, the stories of the perpetrators would also be needed.

And above all: a debate on the relationship between power, violence and gender.

In Ulli’s story traumatic experiences have a decisive effect on emancipation. The understanding of the unjustified exercise of power directed at him is growing.

He begins to resist.

“I’m a hole […] who does not accept your rules. You may not know women like me, but you will still get to know! I come from the future. I can do anything, men. My gaze is directed straight ahead, not to the floor !! ”

If violence only appeared to be violence, it would be easier to resist it individually or socially. The problem is that power and violence are deep in structures.

Despite the resistance, Ulli finds herself in distressing situations.

In the end, Lust’s work does not propose a solution to overthrow patriarchal structures. Rather, it focuses on raising the reader’s awareness.