Sara Sorribes: “I must be even more humble, the title doesn’t give me anything” 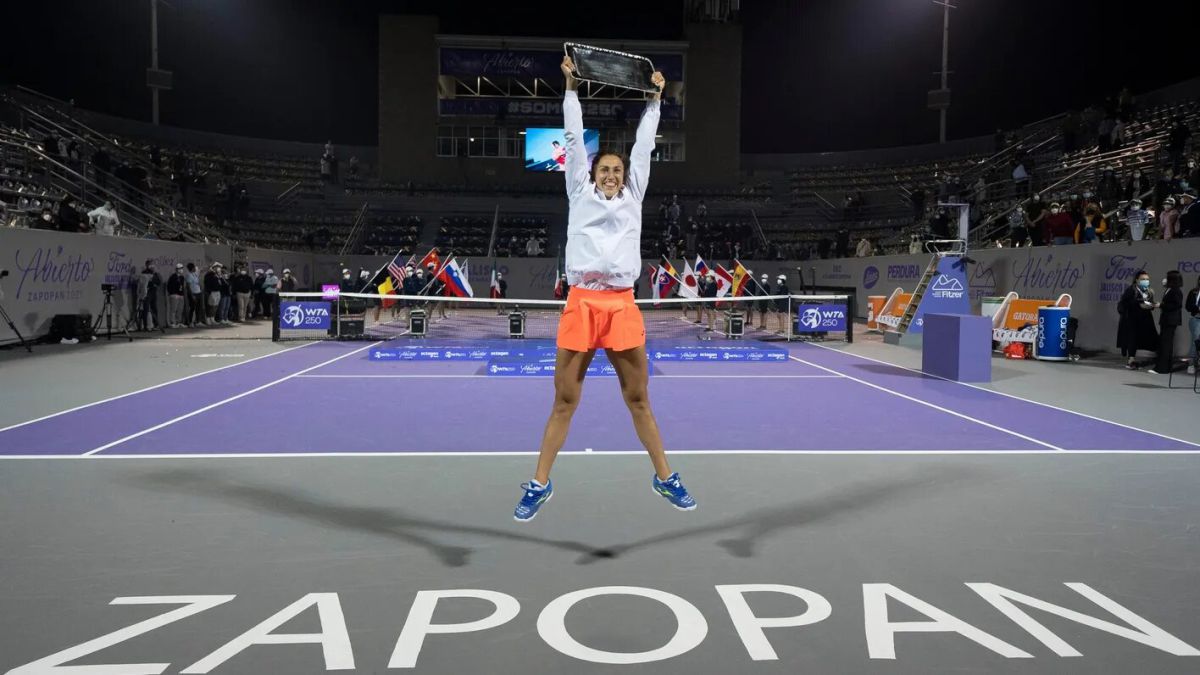 Sara Sorribes (Castellón, 24 years old) won her first individual WTA title in Guadalajara (Mexico) last Saturday against Eugenie Bouchard. It was the award for perseverance of a humble and hardworking tennis player who has improved a lot in recent years. Success doesn’t change your perspective and counts why at AS.

Many players fail to win a WTA title in their entire careers, as happened to their coach, Silvia Soler. How do you rate that achievement?

It is a very positive thing. Before the final I told Silvia (she followed her from home) that I remembered her a lot, because she had told me about the two she had played and, especially, the one in Bogotá (in 2016, 6-2, 4-6 and 6 -4 against the American Falconi), which is the one that was closest. I had a lot on my mind what she told me and I wished that I could do it a little differently and fall on my side.

What was the first thing you thought about after match point?

I was very, very happy. All the moments I had spent to get there came to mind. He had been doing good results, but when he reached the quarterfinals he could not break that small barrier. Luckily this time it was different.

Was that barrier psychological or tennis?

I think if I didn’t win those games, like Sabalenka (0strava 2020) or Kostyuk (Abu Dhabi 2021), it was because they played better than me and had a higher tennis level. There could have been a small mental part, but they were games in which I started winning 6-0 and in the end they came back and beat me quite easily.

His style of play is very different from those of those hitters on the circuit, more consistent, like that cut backhand that he executes so well and is not very common. Is that your secret weapon?

Not at all. What’s more, I think it’s something that if I want to continue leveling up I will have to use less and less, simply for a change, not as a routine, because in the end the rivals get used to it and don’t fail. You have to make them fail, although it is true that they are probably bothered by the fact that the ball comes lower or changes their speed, but I have to improve to do more damage.

And what about Ashleigh Barty, number one in the world, who uses a lot is ‘slice’?

That to begin with, he takes 190 to all the sites, how he wants and when he wants, and he has a very good right hand. I am very far. She uses it to put on after the drive. I try, but she does it better than me.

What do you need then to improve?

Having more weapons is what tennis is about. Because every time people are more good and it is more difficult to win the points.

I really like to improve and feel that every day I have learned something or have done something better. It’s what moves me and makes me get up really wanting to go to training. Then I am aware that there are many players who hit the ball much better than I do and that makes my way of seeing it, my work ethic, that I have to do more and very well to be able to compete with them. There comes a point where you get used to it, every day you give your 100% and beautiful things happen like in Guadalajara.

I go to the club in Valencia around 09:30, I start training at 10:00 for two and a half hours, and then I do physical. In the afternoon, I continue with the preparation in the gym for an hour and then I do the rest of tennis. Sometimes I only get ready in the morning or do a little less, depending on how I feel. That depends on my team, and on Jose, my physical trainer, who control me, because if it were up to me I would be spending hours all day and that’s not good.

And what to do when you are not immersed in tennis?

I like to be in my town, Vall d’uixó, calm, with the usual people, the same friends, having a coffee, watching a football game. I also really like being at home.

One of the things in which your physique has progressed the most?

Yes. There has been a very big change in my physique. I have changed a lot in the last five years. It is a process, not something that has happened overnight. I spoke with professionals who led me to the right path. In the end you need your body for everything, and it should be your best tool and your best ally. I do everything possible to help me.

Has the change of team, with Silvia Soler, had a lot to do with your progression?

Coming home was a great peace of mind for me. I wanted to and from there I felt very comfortable. I already had a good friendship with Silvia and I was very surprised at how well we hit it off at work, everything she brings me and what she is about to give me. Then there is Paco Fogués, who has more experience as a coach and they make a spectacular couple. I fully trust my team.

And he has already gotten rid of the dramas of the past (his former coach, Germán Puentes, gave him a public and very notorious anger two years ago in Colombia) …

That was an episode that was difficult to digest and at that moment it was hard. Each one is as it is, and I am happy to work now with Silvia and Paco, who already trained me on single days when I was little.

Speaking of your childhood, how did you start playing?

I started at the tennis club in my town, Vall d’uixó. My mother, who taught there, took me and they saw that I was not doing badly. I asked to go play whenever I could and I had good results for Castellón. Then I started competing in the juniors and the ‘ten thousands’ until I got to where I am now.

Did you have references?

I don’t know whether to call them references, but when I was a child I saw Henin play live and I really liked it. Also Wozniacki. Although in reality I was always David Ferrer’s. It is the closest thing to a reference that I have had, because I really liked seeing him and he was a total example.

Do you think that now the rivals will have more respect for you?

Some of them might think before playing against me that I have won in Guadalajara. But that will not be something that is in my favor if I start playing and I think that’s why I’m going to start winning 2-0. If I believe it, I will start losing 5-0. What I have to do is be even more humble, accept whatever comes my way and take it in the best possible way to be able to compete many days in a row, which is what I like.

But does that title have to be an encouragement to you?

Yes, it is a very nice moment, but it does not give you anything for the next few weeks. I will have the same fears, the same concerns and I will have to manage the same moments. I will try to do well and keep working so that my tennis is better every day.

From the outside, you can see an overwhelming equality in the women’s circuit. Is that so?

It is as is. I am young, but I think the average level has risen a lot. Anyone can beat you and that is stressful on the one hand, but nice for the circuit and for the spectator.

Do you set a specific goal?

I prefer to go day by day. I really like that way of understanding it, improving a little bit every day and feeling that when I get on the track I have given everything I had. That is the best way for the results to arrive.

Would you be excited to be at the Tokyo Games?

I’d rather not look at him too much, although I think he’s a little closer now. I try not to notice that, but it is something that would make me very excited and dream about it. For that you have to have a better ranking (it is 57th), which also allows you to enter the WTA 1,000 and have a better frame, but what you have to have is level. Tennis is fair and puts you in your place at the end of the year. It’s about going one step at a time.

How do you handle pandemic tennis, with the bubbles and the restrictions?

Very good, because I like what I do and I feel privileged to be able to play with everything that is happening in the world. I am thankful for being able to get on the track and continue doing what I like.

Do you feel valued as an athlete?

It depends on each one. In my case, I have no problem for not having too much media attention. I am quite calm, I like to be with my people, to do a little, but all from the heart. I do not need great things and that subject does not concern me much.

How do you see the moment of Spanish women’s sports?

I think it’s okay now. Tennis is very good and in sports like football, where there are more differences, it is increasing, and I am very happy because we work a lot and there are beautiful things that would be good if they were achieved so that there is even more equality.

18 people were injured in road accident near Ryazan