Sancho in response to racist abuse: Hate will never win 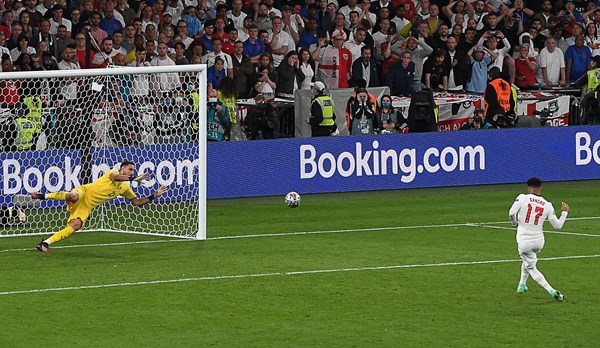 England football star Jadon Sancho stressed that “hate will never win”, after he was subjected to racist abuse on social media, in the wake of England’s painful defeat against Italy in the European Nations Cup “Euro 2020” final.

Sancho and his colleagues in the English national team, Marcus Rashford and Bukayo Saka, fell prey to racist abuse by many social media pioneers, after each of them missed a penalty kick in the final match of the continental competition, which took place at Wembley Stadium in the British capital, London, last Sunday, to end. The hopes of the “Three Lions” team in obtaining the first major title since its only coronation in the World Cup in 1966, when it hosted the World Cup on its soil.

Sancho, 21, who apologized for his role in the disappointing finale of that dramatic competition, admitted that he was not surprised by what happened after the loss, but stressed that those responsible could not be allowed to go unpunished.

And the British news agency “BA Media” quoted a post for Sancho on his official account on the “Instagram” application, in which he said: “I will not pretend that I did not see the racist abuse that my brothers Marcos and Bucayo received after the match, but unfortunately this is not something new, we need as a society to do Do better, and hold these people accountable.

Sancho added: Hate will never win. To all the young people who have been subjected to such abuse, keep your heads high and keep chasing the dream.

The original and extra time for the final ended with a 1-1 draw, as England advanced with an early goal signed by Luke Shaw in the second minute of the match, before Italy equalized with a goal by Leonardo Bonucci in the second half, so that the two teams ruled for penalty kicks, which Italy won 3/2 Despite the heroic performance of England goalkeeper Jordan Pickford, who saved two penalties from the Italian national team.

Sancho explained: “The first thing I thought before entering any football match was always how can I help my team? How do I help? How do I achieve a goal? How do I create opportunities? And that’s exactly what I wanted to do with this kick, I wanted to help the team.”

Sancho added: “I was ready and confident to play it, these are the moments that you dream about as a kid, that’s why I play football, these are the pressure situations that you want to be in as a footballer.”

He continued: “I scored penalties before at club level, I trained countless times with both club and country, so I chose the angle at which I shot the ball, but this time it was not supposed to be.

Sancho revealed that he is still trying to adjust to Sunday night’s defeat, but has already begun to reflect on the successes of the tournament, and the promise of what will come from Gareth Southgate’s squad in the future.

Sancho recalled: I took two days to reflect on Sunday’s final and still feel a mixture of emotions, I would like to say sorry to all my teammates, the coaching staff and most of all, the fans I let down. Sancho stressed: “This is the worst feeling I’ve had in a long time, it’s hard to even express the true feeling in words, but there were a lot of positives to take advantage of this tournament even though defeat will hurt for a long time.”

Sancho said: “I am proud of this English team and how we have united the entire nation in 18 months that have been difficult for many people. As much as we wanted to win the championship, we will build and learn from that experience in the future.

Sancho ended his post by saying: “I want to say a big thank you for all the positive messages, the love and the support that far outweighed the negatives. It was an honor because I always represented England and wore the Three Lions shirt, and I have no doubt that we will come back stronger.”