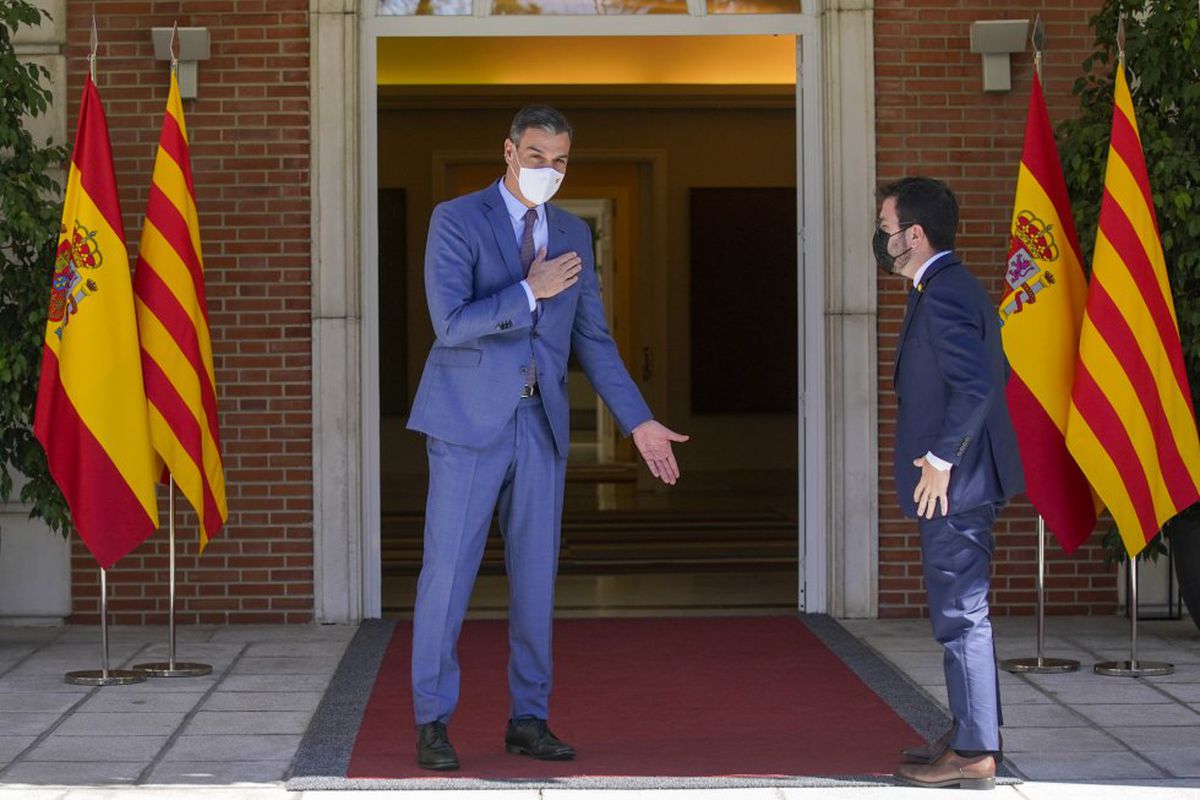 Two and a half hours to start the thaw have ended, as expected, with a single pact of dates and ERC entrenched in self-determination and amnesty. The President of the Government, Pedro Sánchez, and the President of the Generalitat, Pere Aragonès, have agreed to resume the Government-Generalitat dialogue table, which only had one meeting in February 2020 (before the pandemic), in the third week of September with a meeting in Barcelona. They have also agreed that in the month of July the State-Generalitat Bilateral Commission will meet again, and there the issues in which there are more possibilities of agreement will be discussed. Among them, questions about transfers, investments in Catalonia, financing of the dependency law and the spending of the large European recovery fund.

Sánchez and Aragonès have agreed to separate the two major issues: on the one hand, the political conflict; and on the other, economic matters. The first will be dealt with at the dialogue table, an unofficial body; and the others, in the bilateral one, which has existed for years, although during Mariano Rajoy’s stage it barely met. The differences between the two positions are huge. Aragonès has made it clear that they will bring self-determination and amnesty, the two most delicate issues, to the dialogue table. And they will demand that any solution have a final validation in the vote of the Catalans; that is, a referendum. Sánchez doesn’t even want to hear about it. “The president has not made any reference to amnesty and self-determination. Both presidents are aware of the limits of dialogue ”, concluded the Government spokesperson, María Jesús Montero.

At the beginning of the press conference, Aragonès has left the positions open enough so that there can be negotiation, since a reform of the Statute could also finally be voted, a solution that the Executive has proposed at some point. But as the questions progressed, the president he was hardening his position. Aragonès explained that Sánchez has not proposed a new statute as a solution, but has insisted that this is not the way out that they see, but the referendum. “The State can make the proposals it considers. But we have not traveled all this way to go back to 2010, when the Constitutional Court changed the Statute approved by the Parliament of Catalonia. Our proposal is for a referendum for citizens to choose what the future of Catalonia is. Make no mistake. The Government does not renounce the independence of Catalonia. Is this extremely complex? Yes. Because it is about sovereignty. We defend that the future is chosen by Catalonia ”.

And what middle way would there be? They asked him. “For us the middle way is the referendum, because the starting point is independence.” Even so, Aragonès also insisted that ERC will not leave the table, and has not even set his life in two years, like Junts, since he only suggests that after that time there will be an evaluation to see if it is worth continuing. “We have marked this two-year milestone in which a review of the work of the table will be carried out to decide if it is concluded or continues to advance. But the table will last as long as it takes. We are never going to get up from areas where there is the possibility of dialogue and negotiation, ”he insisted. The Catalan president has not wanted to clarify whether Oriol Junqueras will be at the table, but from his words it was deduced that most likely it is not like that, because he has insisted on the “institutional” nature of the meeting.

In a clearly beginning tone of a long negotiation in which time has been bought for now by calling the most difficult meeting for the end of September, Aragonès has admitted the enormous difficulty of finding an agreement. “We have verified the distant positions between the Government of Catalonia and Spain. There are obvious differences on how to resolve the conflict. But the existence of this conflict is recognized, which will only be resolved through dialogue and an agreement that will have to have the endorsement of the citizens through a vote. We have agreed that the teams will work in the coming weeks to agree on the work methodology to hold a meeting the third week of September in Barcelona to discuss the political conflict between the two governments ”, he assured.

Sánchez, through the Government spokesperson, wanted to offer a much more optimistic version than Aragonès himself. Montero has spoken of a “cordial” meeting with various agreements. “The conflict in Catalonia has been entrenched for a long time. It is time to take a step forward. No one is asked to give up our way of thinking. Our framework of coexistence is subject to the 1978 Constitution. Spain is meaningless without Catalonia and Catalonia cannot be understood without Spain. Unity is the engine that will allow us to overcome this economic crisis, ”said the minister, seeking that speech of harmony that Sánchez has made since he made the decision to grant pardons. “It has been the cordiality and the meeting that has presided over the meeting,” the minister insisted.

Montero has assured that Sánchez has asked the president of the Generalitat to attend the Conference of Presidents scheduled for the month of July and in which the recovery fund will be discussed, a matter that is of particular interest in Catalonia. For the Executive it is relevant that ERC has agreed to first meet the bilateral commission, where there are many possibilities of reaching agreements, and leave the dialogue table for later, which is much more complex. Sánchez, according to Montero, has also asked Aragonès to have “a dialogue between Catalans”, that is, a forum of parties in this community like the one proposed by Salvador Illa, from the PSC.

The president of the Generalitat has insisted: “We must find a way to satisfy the majority will of the Catalans and that goes through self-determination. Amnesty and self-determination are the two great consensuses of Catalan society. This is what we will bring to the dialogue table. The first step is to comply with the Council of Europe, withdraw the extradition requests and end the persecutions ”. This was the furthest part from the positions of the Sánchez government, which rules out amnesty and self-determination, and rejects the recommendations of the Council of Europe. “This negotiation will not be easy because we are not going to resign. Let no one be confused. This is not about reforming financing. We are going with all the ambition to defend a referendum on the future of Catalonia. We have to arm ourselves with patience. The State has an opportunity, but it has to make a State proposal ”, has assured the president.

Montero has offered a very different version of the meeting, always in a positive tone. And despite what Aragonès has indicated about the possibility of the Government withdrawing the extradition requests for Carles Puigdemont and other leaders, something on which the president, the Executive spokeswoman has made it clear that Sánchez is not in it nor does he intend to take his “gestures” beyond pardons. “What I can tell you is that nothing has gone into gestures. What the Government believes is necessary is that the people who evaded the action of justice return to Spain and put themselves at the disposal of justice, ”said the spokeswoman. While Aragonès returned again and again to self-determination, amnesty and “the exiles [huidos de la justicia]”, Montero tried to bring everything to the field of” possible negotiation. “

There was no exchange of gifts or walks through the gardens of La Moncloa, as has happened on other occasions. The expresident Quim Torra, disqualified for disobedience, gave Sánchez a gift at their 2018 meeting, which started the dialogue table, with a bottle of ratafia, a traditional Catalan liquor that the former Catalan leader is very fond of. The head of the Government, for his part, took Torra for a short walk through the presidential installation.

Expectations for the meeting weren’t particularly high. The objective from La Moncloa was to try to break the granite intention of Aragonès to focus the meeting on the sovereign issue, while the Government wanted to take advantage of the meeting to insist on the need to stop causes derived from the you process, such as that of the Court of Accounts that on Monday confirmed millionaire fines to former high-ranking officials of the Catalan Executive.

The Generalitat has always insisted that its proposal to solve the political conflict in Catalonia is to hold an independence referendum agreed with the central Executive, a formula similar to that applied in Scotland, and the approval of an amnesty law. The Government responds that neither of the two proposals fits into the Constitution and is committed to a change in the Statute. And there they continue the positions after two and a half hours of meeting, but with news: both insist on their willingness to dialogue, dates are set to start it and neither seems willing to leave the table for a long time.