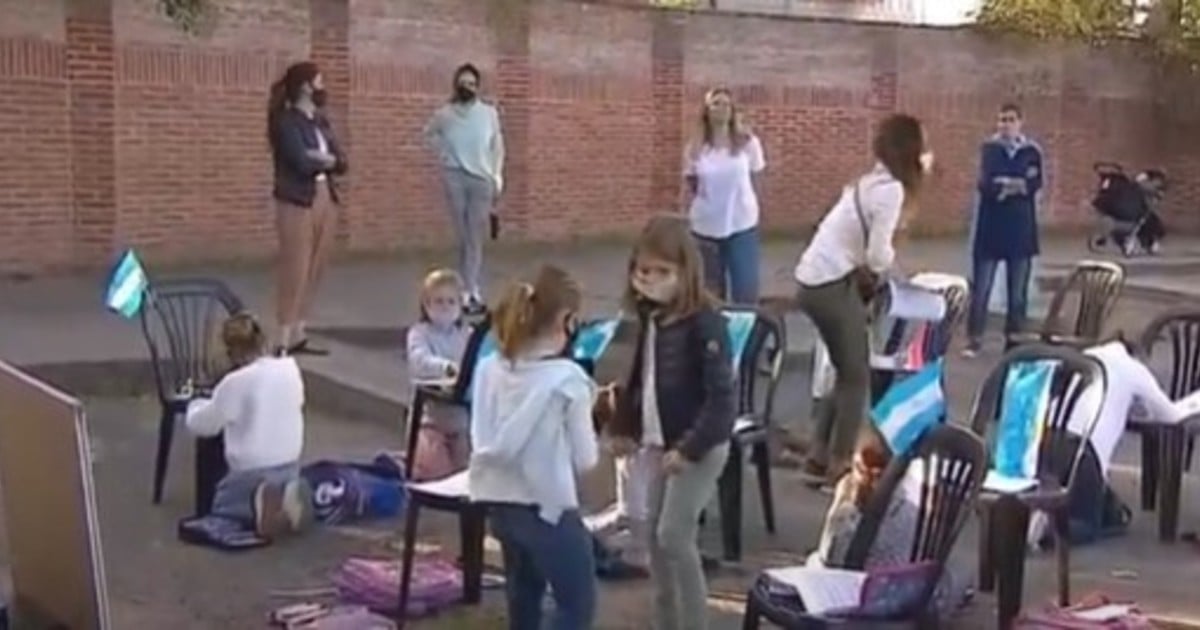 With face-to-face classes suspended in the Conurbano until April 30, in San Isidro a group of parents decided that the boys continue with their learning. How? Resolved teach outdoors, in a square, in front of one of the closed schools.

Respecting the distancing protocols, the idea is that during the two weeks that the presidential DNU is in force, the courses that participate in these classes take turns, as a way of make up for that lack of school attendance.

“We try to keep kids from focusing their attention on a Zoom and keep up the human interaction. With socialization. We had many activities scheduled in these two weeks and we decided to come to the plaza and do what they would be doing in front of the screen, “said one of the mothers in charge of the initiative, in a talk with TN.

The initiative arose from a group of mothers and fathers who have their children in primary school. They seek to support the protest and make visible the need for presence in the classrooms.

With different posters pasted on the walls of the school, in San Isidro, the parents made the protest visible. Photo: TN capture

With plastic chairs and tables and with distance, the parents organized a classroom in front of the school. There, some 15 third graders They do homework this Tuesday for a space of little more than one hour.

“As mothers and fathers we are concerned about the extent to which children lose school attendance. We went to different protests over the weekend because we believe that the school space is the last to close“added another mother with her testimony.

And he added: “On Monday there were symbolic hugs to different schools and we did not want to resign ourselves to locking up the boys again. We believe that it is possible to protest, but at the same time do something constructive for the boys. “

The parents themselves clarified that the school has “nothing to do” with the initiative and made it clear that this does not seek to replace the content that they can learn in the classroom. “It is so that the boys do not lose contact with their peers since that was very traumatic. We seek that what they have to do in front of a screen they do with their peers,” they detailed.

“During the two weeks that the decree lasts, we are dividing the days and the contents that we are giving them. Every day there will be classes for a different grade until each one has at least some face-to-face class in the square,” they pointed out.

The parents’ face-to-face claim occurs in the midst of the political tension unleashed between the City, the Nation and the Province due to the measures taken by President Alberto Fernández with various restrictions due to the pandemic that included the return to school virtuality for two weeks at the AMBA.

Márquez: "My mother told me off for making her cry so much"

At least 11 people died in eastern China due to hurricane