Salt in the subsoil of Mars, a factor that would make liquid water possible in three of its lakes 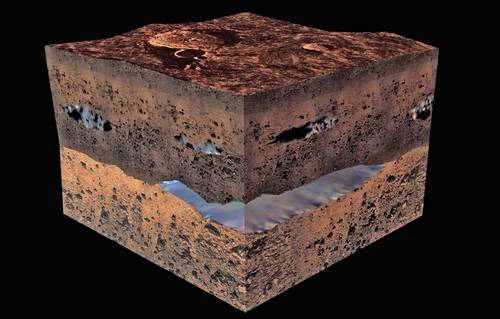 In 2018, the ship Mars Express of the European Space Agency (ESA, for its acronym in English) discovered a huge underground lake at the South Pole of Mars. It measured about 20 by 30 kilometers. New investigations released yesterday reveal that this body of water is surrounded by three others, but buried under a layer of ice 1.5 kilometers thick.

Scientists believe that the water in these lakes is salty, so it can stay liquid instead of freezing in the low temperatures on the planet.

To make this discovery, the orbiter used a special instrument called marsis (for the acronym in English of Advanced Radar for Investigation of the Mars Ionosphere and Subsurface). It’s a “ground penetrating radar,” meaning it sends pulses from orbit to the planet’s surface. By calculating how long those pulses take to bounce back to the probe, and how strong they come back, scientists can determine what’s underground.

The new analyses, carried out by the Southwest Research Institute (SwRi), support the probability that there is salty water under the ice cap. Laboratory measurements of the properties of ice-brine mixtures at temperatures of minus 100 degrees Celsius, by geophysicist David Stillman, support the unusually bright reflections detected by Marsis.

With a 40-meter antenna, it flies over the planet and bounces radio waves off a selected area; then it receives and analyzes the echoes or reflections. Any liquid water near the surface should send out a bright, strong signal, while the radar signal for ice and rock would be much smaller.

Because conventional models assume that Mars’ south polar cap experiences temperatures much lower than the melting point of water, many scientists have questioned the presence of that liquid resource. Clays, hydrated salts, and salt ices have been proposed as possible explanations for the origin of the bright basal reflections.

The Italian-led team, which has been investigating the proposed phenomena since 2018, used previously published data, simulations and new laboratory measurements.

“Liquid water lakes actually exist under glaciers in the Arctic and Antarctic regions, so we have terrestrial analogs for finding liquid water under ice,” said Stillman, a specialist in detecting water in any form (liquid, ice or absorbed) in planetary bodies and co-author of the paper describing these findings, Earth and Planetary Science, Letters.

“The exotic salts that we know exist on Mars have incredible ‘antifreeze’ properties that allow brines to remain liquid down to minus 75 degrees Celsius. We studied these salts in our laboratory to understand how they would respond to radar,” he explained.

Stillman has more than a decade of experience measuring the properties of materials at low temperatures to detect and characterize subsurface ice, unfrozen water, and the potential for life throughout the solar system. For this project, he measured the properties of perchlorate brines in an SwRI environmental chamber that produces near-liquid nitrogen temperatures at pressures similar to those on Mars.