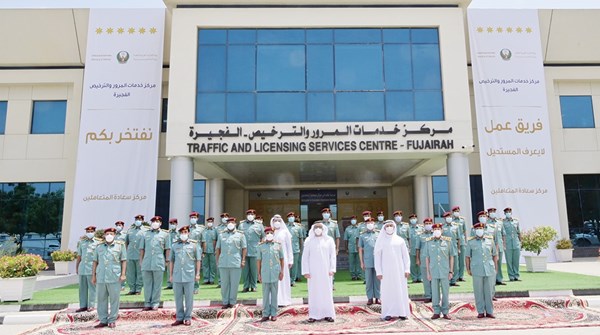 Lieutenant-General Sheikh Saif bin Zayed Al Nahyan, Deputy Prime Minister and Minister of Interior, unveiled a six-star plaque for the Traffic and Licensing Center of the Fujairah Police General Command, which obtained this advanced classification within the results of the evaluation of the fourth cycle of the international star system for rating services, which was approved by His Highness Recently, Sheikh Mohammed bin Rashid Al Maktoum, Vice President and Prime Minister of the UAE and Ruler of Dubai, received the highest rating for government service centers in the country, for the first time since the implementation of the global star system for rating services, as part of the evaluation that included 69 government service centers. .

sincere efforts
General Sheikh Saif bin Zayed Al Nahyan congratulated the center’s employees on this achievement, which comes as a result of their sincere efforts in implementing the standards of the distinguished government performance system, and achieving the objectives of the Ministry of Interior’s strategic plan, in enhancing customer satisfaction with the services provided, in line with the vision of the wise leadership towards Enabling the government sector in the country to excel in its systems, performance, services and results, and promoting a culture of creativity, loyalty and excellence among all Ministry of Interior employees.

This came during the visit of His Highness, Deputy Prime Minister and Minister of Interior, yesterday morning, to the Traffic and Licensing Services Center in Fujairah, where he was received by Major General Mohammed bin Ghanem Al Kaabi, Commander-in-Chief of Fujairah Police, Brigadier General Mohammed Rashid bin Naieh Al Tunaiji, Deputy Commander-in-Chief, and senior officials. Fujairah police officers, who welcomed His Highness and the delegation accompanying him, which included Major General Khalifa Hareb Al Khaili, Undersecretary of the Ministry of Interior, Abdullah Nasser Lootah, Director General of the Prime Minister’s Office, Mohammed Rashid bin Taliah, Head of Government Services for the Government of the United Arab Emirates, and Salem Balioha Al Muhairi Director of the Government Services Evaluation Department at the Prime Minister’s Office at the Ministry of Cabinet Affairs.
His Highness toured the Traffic and Licensing Center in Fujairah, during which he was briefed on the progress of work and services provided to make customers happy, the progression of the services provided, and the use of modern technologies in order to provide the best services, in accordance with standards of quality and institutional excellence.
At the conclusion of the visit, General Sheikh Saif bin Zayed Al Nahyan, Deputy Prime Minister and Minister of Interior met the work team at the Traffic and Licensing Center, and congratulated them on this advanced achievement, and praised their efforts that resulted in adding a new achievement to their achievements, and urged them to redouble their efforts to achieve more success and progress. and leadership, and took a souvenir photo with the work team on this occasion.

Outstanding strategic planning
Major General Mohammed bin Ghanem Al Kaabi, Commander-in-Chief of Fujairah Police, said, “We congratulate our country and our wise leadership for this achievement announced by His Highness Sheikh Mohammed bin Rashid Al Maktoum, Vice President and Prime Minister of the UAE and Ruler of Dubai, may God protect him, which is the acquisition of the Traffic Services and Licensing Center in Fujairah Police.” It received a six-star rating for the first time this rating has been achieved in the government services system in the country.
He added that this achievement by the Fujairah Police came as a result of the unlimited support of His Highness Sheikh Hamad bin Mohammed Al Sharqi, Member of the Supreme Council and Ruler of Fujairah, His Highness Sheikh Mohammed bin Hamad Al Sharqi, Crown Prince of Fujairah, and Lt. General Sheikh Saif bin Zayed Al Nahyan, Vice President The Cabinet and Minister of Interior, which is the fruit of the Ministry of Interior’s distinguished strategic planning, and the solidarity and cooperation of all partners, members of society and its institutions, and all affiliates of the Fujairah Police, pointing out that they are keen to work continuously to improve the system of services provided by all centers, in accordance with the strategy of the UAE government aimed at strengthening The services provided in a way that exceeds the expectations of the customers, and works to improve the quality of life for the Emirati community.
He stressed that this achievement would not have been achieved without the continuous directives, careful follow-up of His Highness, his keenness to stand up to every small and large, and his continuous affirmation of commitment to best practices, based on the approach adopted by the Ministry of Interior, which stems from its motivational policies aimed at doubling attention to workers, and unleashing their capabilities. And their creative skills that support the process of modernization and development.