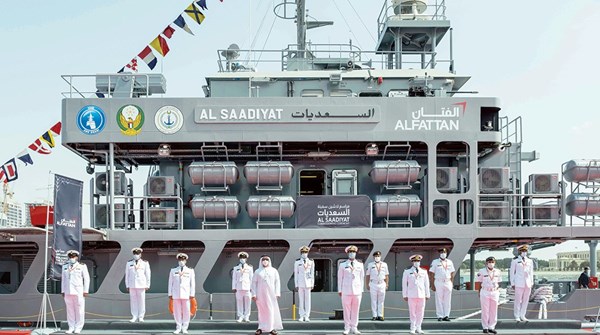 His Highness toured, accompanied by Rear Admiral Sheikh Saeed bin Hamdan bin Mohammed Al Nahyan, Commander of the Navy, which included the pavilions of a number of national and international companies participating in the maritime defense exhibition in its sixth session, and His Highness exchanged conversations with exhibitors about the latest technologies and modern parts participating in the exhibition. .
His Highness also toured on board the Emirati multi-tasking ship “Saadiyat”, which joined the service in the Navy’s fleet. His Highness was briefed on its advanced facilities including operating rooms, command and equipment, and heard from naval forces officers about the ship’s tasks of securing, transporting, supplying, medical evacuation and high technology , And the modern systems in which they are used.

In NAVDEX, His Highness was briefed on the most important modern technologies in the advanced maritime industries, solutions and developments in the maritime defense industry, and the marine vessels that represent the elite of global industries in the maritime fields, in addition to the latest technologies in coastal security systems, marine communications solutions, and special equipment and devices in the fields of Naval defense.