Saif Al-Jabri: The testimonies of my children … I can hardly count 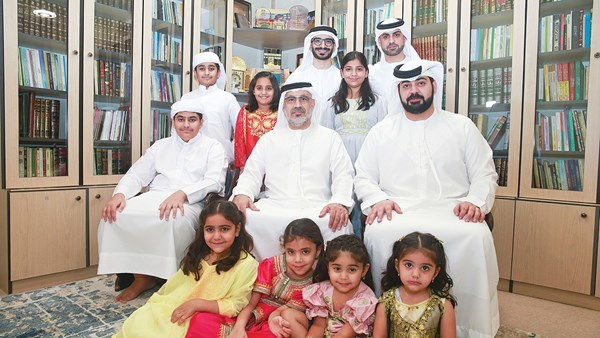 Dr. Saif Rashid Al-Jabri, President of the Union of Arab Academics and Scientists, is proud of his 12 sons who have written impressive successes on the scientific level, achieving through them a pledge he made on himself to establish a family whose motto is excellence in the fields of knowledge. And by his insistence on playing the role of a role model and supporting the little boy until he grows up, he had what he wanted, celebrating year after year the testimonies of his daughters and sons and their almost countless rewards.
By looking at Dr. Saif Al-Jabri’s academic and professional career, and his continuous social work for more than 40 years, the secret is evident in his ability to create the success of his family step by step. His passion for science did not stop at an end, and to this day he is still seeking to develop his skills in line with the requirements of the times and the uses of digital technology. He is a lecturer in culture and society at the Canadian University in Dubai. And his home library is full of shelves with certificates and medals that he shares with his family members, and he lists them proudly of every station he made during his school years, which coincided with his supervision of the graduation of his children in their various educational stages.

A passion for science
Al-Jabri tells his story of success and his passion for supporting his children with all his advice and guidance, saying: I am one of the children of the Emirates who lived a period of hardship before the establishment of the union. When my father passed away, I was five years old, so my mother took care of me in the best way, and she was devoted to my education with the rest of my brothers. From books and I am looking forward to more life sciences.

Realizing the Dream
He continues: Despite the difficulties that accompanied my family at that time, I entered school and was working at the same time within the “Dubai Defense Force”, before the establishment of the Union. After my marriage in 1979, I realized that establishing a family should not prevent me from fulfilling the dream, and the watershed date in my life was when I graduated with a Bachelor of Arts degree from the UAE University in 1988 .. And then began the career of Al Jabri’s career development, moving between more than one national forum. As a preacher in the armed forces, and then worked in the Department of Islamic Affairs, until he decided in later years to pursue postgraduate studies and finish his doctorate in the fundamentals of religion from Omdurman University in Sudan with honors in 2001.

Message to the parents
With all his societal tasks and his busy professional stations, Saif Al-Jabri did not neglect his family members, as he had better directed them towards excellence, which had a great impact on their drive to serve the nation. It sends a message to parents, to the effect that they focus on the skills of their children and work to enhance them, and not just be busy fulfilling their desires. Because excess softness harms children, makes them dependent and a burden on those around them. He believes that education is a responsibility that should focus on providing for the needs of children and not on their requests, except in line with their interests, so that they grow up on values ​​and leave an imprint in life.

Leading Brother
Muhammad Saif al-Jabri is an example of his brothers, and this is the most important achievement he has achieved so far:
* “Medal of excellent service” and the medal of sincere service.
* Certificate of appreciation from the first class for remarkable excellence in work and service to the nation.
* Holder of a master’s degree in political science on African affairs.
* He received a national honor for his choice of the subject of the Master’s thesis, which is the first scientific gesture in this regard in the UAE.

Knowledge colors
After the doctorate, the pace of ambitions increased for Saif Al-Jabri, towards serving the nation in local and international forums. He joined as an expert member of the Islamic Fiqh Academy in Jeddah, and represented the state as a visiting professor in a number of Arab universities, and did not neglect the societal activities that made him exchange the colors of knowledge wherever he went.

50 books
Saif Al-Jabri is the author of more than 50 books, and participated in dozens of scientific seminars and targeted lectures. And with his retirement from the job, he did not give up serving the nation at home and abroad, and today he is the president of the Council of the Union of Arab Scholars Academics of the Economic Unit of the Arab League.

Certificates
Al-Jabri refers to the mother’s role in the life of his 12 children, pointing out that they all excelled in several fields and received a bunch of appreciation certificates from the most important government agencies, some of whom graduated and some of them still in school .. 4 of his daughters finished university studies, and they were married and transferred Science itself message to his descendants.
His son Muhammad is preparing to discuss his doctorate in Gulf-African relations, and he is the holder of the “Medal of Excellent Service” and the Sincere Service Medal.

Rashid is a civil defense officer and has a great passion for community service with several certificates of appreciation.
Hamad graduated in public administration from the University of Sharjah, and he is a distinguished employee in his work in a private company.
Hamid is a first-year foundation year at the University of Wales, London, and intends to study nuclear engineering.
Moza is an employee of the Dubai Police, the Airport Inspection Department, and she is a diploma holder with many professional fingerprints, for which she won a bunch of honors.
Sultan is still in middle school, he received a certificate of thanks and appreciation for his participation in the month of reading.
As for Hadef and Alia, they are still in the elementary stage, and follow the approach of their brothers in education.