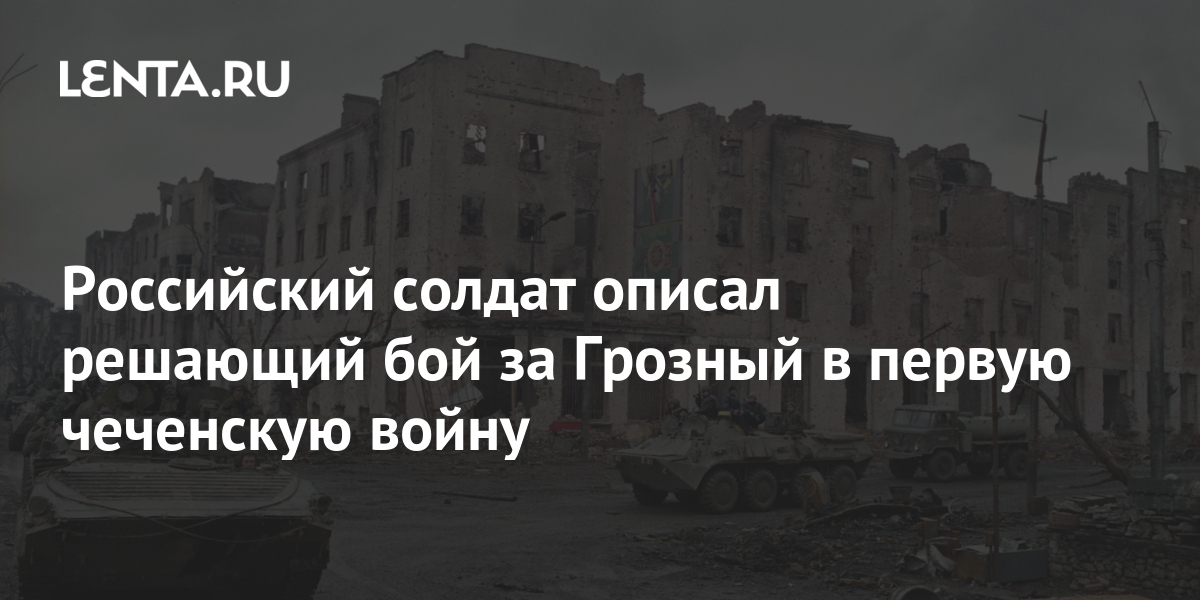 In August 1996, when the last and decisive battle for Grozny began during the first Chechen war, some of the fighters lost their nerves and committed suicide, while others, due to problems with supplies, were forced to look for food. A participant in the events, a former serviceman of the internal troops of the Ministry of Internal Affairs, Alexander Titov, who commanded a grenade launcher during the last battle for the Terrible, told about this in an interview with Lente.ru.

General combat alarm caught Titov’s squad during a vacation in the Kuban. All were raised on command and lined up on the parade ground, then they were given several hours to get ready. They soon found themselves in Grozny.

“Sometimes our fighters could not stand their nerves. One guy committed suicide when he was two months away from demobilization. At lunchtime, everyone went to the field kitchen. And he got into the bempashka and … He was from Volgograd. Psychologically, I couldn’t. Apparently, fear has mastered it, ”the Russian soldier shared his memories.

According to him, it was necessary to be constantly on duty at night in order to hold the defense ring and prevent the militants from leaving Grozny. Titov told about officer Yevgeny Avtonomov, who was wounded while holding these positions: “We could not get him out – the militants did not allow him to come. Bled to death, and the bandits took him away. Eyes gouged out, ears cut off, fingers shattered with a butt.

Titov said that during the fighting there were representatives of different nations among the militants: Chechens, Arabs, snipers from Ukraine. The separatists included both trained professionals and first-time civilians.

The assault on Minutka Square, which was the ultimate goal during the cleanup of the neighborhoods, was especially difficult for Russian soldiers. “Bullets whistled, grenades exploded. Mortars were firing. We have lost a lot of colleagues and officers, ”Titov recalls. In this battle, he was wounded by shrapnel. He was bandaged, but the commander of the grenade launcher did not go into battle anymore.

Earlier, a veteran of the first Chechen war, Colonel Nikolai Batalov described the cowardice of officers during the fighting for Grozny in 1995. He recalled two episodes when servicemen with officer ranks refused to carry out the tasks assigned by the command.

The first Chechen campaign of 1994-1996 was launched with the aim of regaining control over the republic that had declared its independence from Russia.

The decisive battle for Grozny began exactly 25 years ago, on August 6, 1996. Then, unexpectedly for the federal forces, militants burst into the capital of the republic. According to official figures, 494 Russian soldiers and officers were killed in the protracted battles, the losses of the separatists are still unknown. When federal forces succeeded in taking the attackers into the ring, negotiations began, which ended with the signing of the Khasavyurt agreements – the conclusion of a peace that many veterans consider a defeat.