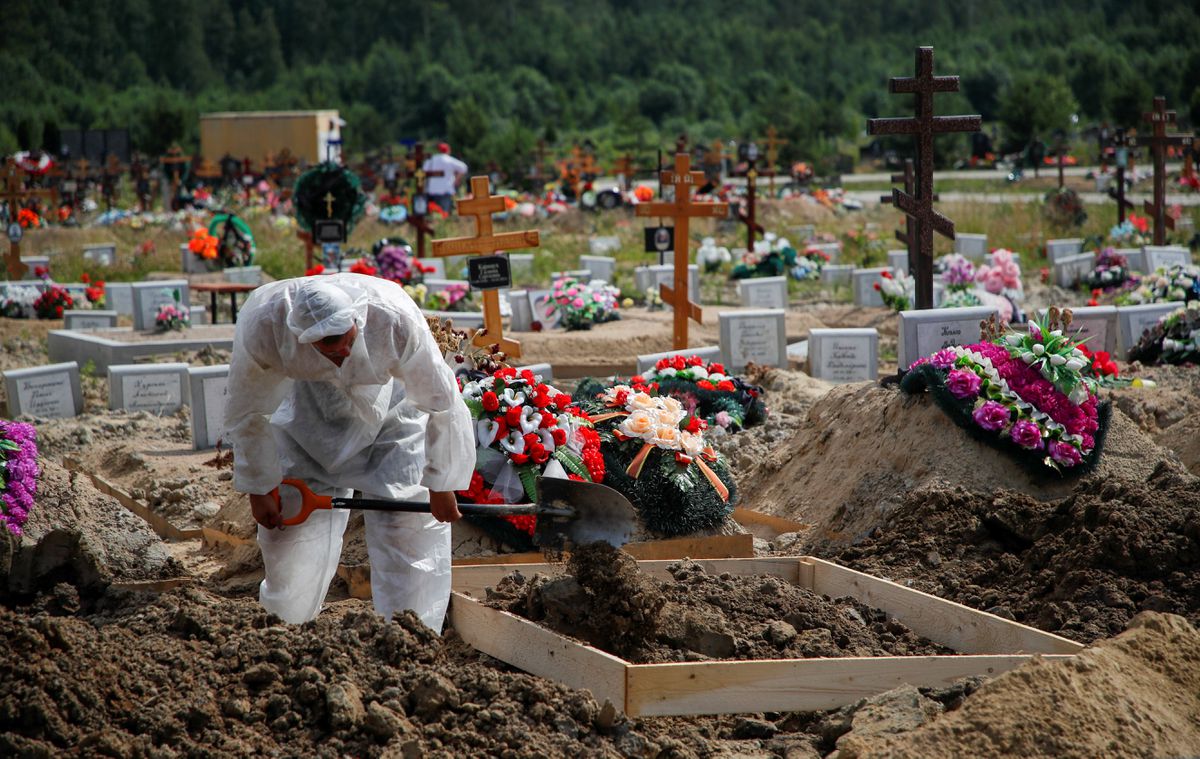 For months, Russia has lived a reality parallel to the pandemic. A fictitious normality in which it was acted as if the coronavirus had almost been defeated; where the cafes, bars and restaurants were full and bubbly, and most of the citizenry followed only the light sanitary restrictions in their own way. The Eurasian country was the first to register a vaccine against covid-19, Sputnik V, and began the immunization campaign for the general population last January. That campaign did not finish taking off and the country is now facing an alarming third wave of coronavirus – driven by the most contagious delta variant – with record numbers of deaths and hospitalizations. And as high points, Moscow and Saint Petersburg, where the Spanish soccer team against Switzerland is scheduled to play the quarterfinals of the European Championship on Friday.

The Russian authorities have reported this Tuesday the highest number of deaths from coronavirus in a single day in the entire pandemic: 652. There have also been 20,626 new infections; more than double that of just a month ago. In Moscow, the epicenter of the health crisis in this third wave, in which a case of the delta plus variant has also been identified for the first time, 121 deaths have been registered this Tuesday. In Saint Petersburg, which at the beginning of the month hosted the Saint Petersburg Economic Forum, promoted as the first major post-pandemic forum, and has already hosted six Eurocup matches, 119 deaths have also been recorded on this date, a record for all the health crisis for the second day in a row.

The health situation in the city of Neva is “terrible”, describes Dmitri Zobnin, president of the Union of Doctors Alliance in Saint Petersburg, who speaks of lines of ambulances of three hours to take the sick to hospitals. Zobnin and his organization, close to the jailed opposition leader Alexéi Navalni, criticize the holding of the soccer championship in a city with hospitals collapsed by the pandemic but with hardly any restrictions on leisure or transportation. On Saturday, the health authorities of Finland, which played two games in St. Petersburg before being eliminated from the European Championship, warned that they had detected an increase in cases related to fans who returned from neighboring Russia after attending the games.

But it is not the only “nonsensical” event, points out Zobnin, who mentions the huge party for graduates of the region’s institutes held last weekend in the center of Saint Petersburg, known as the Scarlet Sails, in the that there was no room for a pin and where the safety distance and the masks were conspicuous by their absence. “We are being victims of the illiterate policy of the authorities on vaccination and prevention, with restrictions lifted too quickly, with unsafe public events organized by the Government itself, which has promoted a triumphalist attitude towards the virus to differentiate us from the West and that now it has led to this ”, laments the health worker over the phone.

Now, as the number of hospitalizations continues to rise, Russia has introduced severe new work and leisure restrictions. And it’s using legal schemes to force tens of thousands of employees to get vaccinated without passing a law making immunization mandatory.

In the center of Moscow, where the rule of “coronavirus-free” restaurants and cafes is in force since Monday and the torrential storms that animate the hot summer are giving a momentary truce, all the terraces are crowded. The outdoor tables are until July 11 the only place that admits people who do not have an official QR code that proves that they are vaccinated, have had the disease or have undergone a negative PCR test less than 72 hours ago. The code, which is obtained through a City Council website that, at the moment, does not seem to find foreigners in the system even if they meet the requirements, has become a precious object for Muscovites, who love nightlife and entertainment. bustle of bars and restaurants, always with loud music.

Ksenia Daltsova and her boyfriend Slava, 24 and 27, say they have been waiting for a table on the covered terrace of a Georgian restaurant for almost an hour. They were vaccinated on Friday with the first dose of Sputnik V and still do not have the full schedule. Until now, they explain, they had resisted. “We passed the coronavirus at the end of last year and the Russian vaccine [que todavía no está reconocida ni por la OMS ni la EMA] It hardly opens any door for you to travel abroad ”, explains Daltsova, who remarks that he did not decide to receive the puncture until he found it“ absolutely necessary ”for his day-to-day life. They were immunized on Friday, at a designated point in a shopping center, and waited almost four hours in line.

In March last year, when the coronavirus was beginning to spread and the health crisis was looming, Russian President Vladimir Putin asked Russian scientists to develop a vaccine against SARS-CoV-2. Putin’s requests are sacred, so the researchers applied and Russia has registered not only Sputnik V, which it has sold and promoted around the world in a vigorous vaccine diplomacy, but also four other immunizations, one of them for animals. .

But despite the fact that vaccination with Sputnik V – “as reliable as a Kalashnikov assault rifle,” Putin assured – began for free and generally last January, last week only about 20.5 had been vaccinated with the first component. million of its 144.5 million inhabitants. This Tuesday, the Minister of Health, Mikhail Murashko, has assured that there are already 23 million people immunized with at least one dose; the vast majority with Sputnik V.

An increase that has been achieved through the hundreds of vaccination points installed these days in shopping centers, theaters or even in subway stations. And only after several regions, including Moscow, have dictated that vaccination is mandatory for public employees, health professionals, education and other similar sectors. Also that at least 60% of the personnel of service companies must be immunized; if not, the company will face fines. The Kremlin insists, however, that these regulations do not make vaccination mandatory. “It is on a voluntary basis, because [quien no quiera vacunarse] you can go to a different job, “Putin’s spokesman Dmitri Peskov said last week.

But as restrictions and requirements for vaccination certificates to remain in the workplace are increasing, the black market for false documents is also on the rise. In one of the dozens of Telegram channels that are usually dedicated to initiating false academic degrees or selling personal data, you can now buy a fictitious vaccination certificate for about 200 euros. Although there are also cases of health workers who ask for a certain amount of rubles for the “favor” of putting a person in the system as vaccinated without the prick. Yelena, 46, an employee of a department store that requires immunization from its employees, says she paid just under 100 euros. “I don’t want to get vaccinated and it seems unfair that they can fire me if I don’t,” says the woman, who does not want to risk giving her last name.

Distrust in the state and the health system, the triumphalist attitude of the authorities and a growing distrust of vaccines, particularly the Russian vaccine, have weighed down immunization. At the end of May, up to 62% of Russians did not plan to get vaccinated, according to a survey by the Levada Center, the only independent in the country; 55% said they were not afraid of a disease that has officially killed 134,545 people in Russia. The opaque figures of state and provincial registries – which only collect direct deaths and do not count them if there are other pathologies -, highly criticized by experts and analysts, have also influenced the impact of the pandemic to be minimized, says the demographer Alexei Raska. And compared to the official figures of the team that monitors the coronavirus, the official statistics of Rosstat point to an excess of mortality of around 475,000 people since the beginning of the health crisis.

Despite the increase in vaccination figures, the Government has acknowledged this Tuesday that its goal of 60% of citizens being vaccinated in the fall (the figure that, according to Health, leads to herd immunity) will not be met. So he’s reevaluating it. Now a law is being drafted to also allow the standardized vaccination of foreigners with residence permits and those who had the disease more than six months ago or even less are being recommended to revaccinate; also those who were punctured in the first weeks of the campaign. Sputnik V is not as effective against the delta variant, also located in Russia. The drug is 90% effective against this strain, compared to 92% against the original variant, according to the developer, the Gamaleya Institute, which however cites unpublished data and that the center has calculated through the registry figures. doctors and also vaccines.

– To travel to Russia, people with a ‘fan identification’ (which could be obtained only if you have a ticket for one of the matches and through a special website) do not need a visa. This digital Fan ID is exchanged, once in Russia, for a paper one, which entitles you to free transportation and other benefits.

– To enter Russia, in addition to the digital Fan ID, it is necessary to present a negative PCR test for coronavirus in Russian or in English, done no more than 72 hours before the flight lands.

– Foreign fans can stay in Russia until July 12.

– The St. Petersburg authorities allow the match stands to be filled only 50%. Each game is expected to be attended by about 30,500 fans. The use of masks in the stadium, safety distance, go through temperature tests is mandatory.

– The bars, restaurants and cafes of Saint Petersburg are open, although with safety distance measures, use of masks, etc.