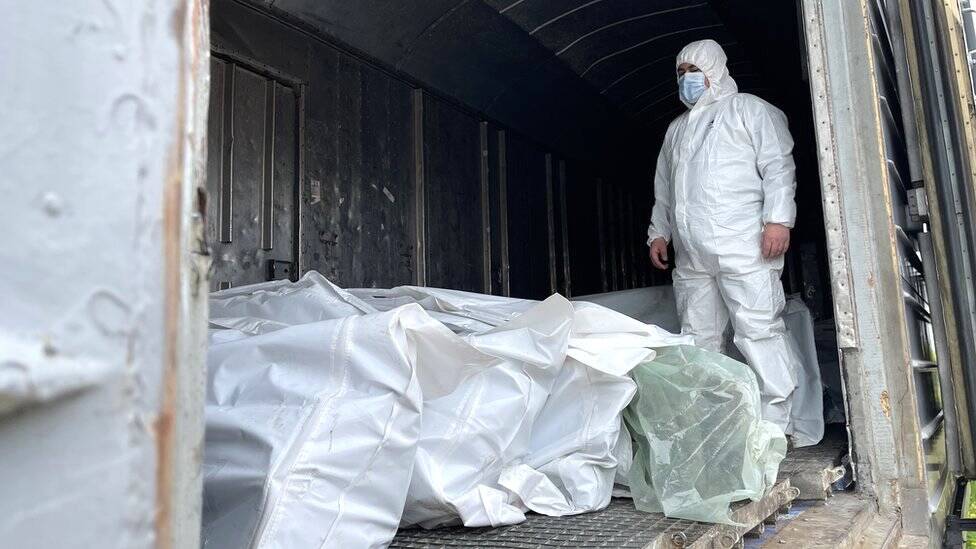 When their dogs insistently started digging in a spot in the forest, the Zavalivka residents called the authorities.

A Ukrainian military team soon arrived on the scene in white protective suits, carefully removing the top layer of soil.

They discovered the body of a man, face down with his legs strangely crooked beneath him. It was clear from his uniform that he was a Russian soldier.

Weeks after they failed in their attempt to seize the Ukrainian capital, remnants of Russian troops are still being found in and around the villages they passed through or occupied near the capital, kyiv. But Ukraine says Russia shows little interest in getting them back.

From the grave in the woods, the body was transferred to a refrigerated train on the outskirts of kyiv that now functions as a mobile morgue for the Russian dead.

The white plastic bags are marked with numbers instead of names. At least 137 were stacked inside two cars on the day we visited.

The Ukrainians try to identify the dead: on the body just brought in, the forensic team found two bank cards, as well as insignia of a Russian motorized rifle brigade.

“At least this one has a chance to get home,” the man in charge announced, showing off the finds, including a dirty fragment of a T-shirt printed with the Russian army logo.

Moments later, I confirmed that the man who had just been exhumed was a young married soldier from Siberia. Near his body bag, a carefully posed black-and-white photograph of his social media profile looked up from my phone.

See also  Market analysis Google and Facebook, which dominate the advertising world, want to innovate, but it can get expensive.

Russia has a slogan that they proudly boast about: “We do not abandon our own.” It has largely been an important part of President Vladimir Putin’s alleged justification for invading Ukraine, as he falsely claimed that Russian-speakers needed protection.

That promise doesn’t seem to apply as much to Russia’s own soldiers.

“The bodies we have found show that they treat people like garbage, like cannon fodder. They don’t need their soldiers. They dump them here, retreat and leave the bodies,” Colonel Volodymyr Liamzin told the BBC.

In reality, we do not know how the young forest soldier was abandoned. Zavalivka villagers say that at the time they were hiding in their cellars from shelling; they assume he was wounded and lost when his unit was forced to withdraw.

From what we have learned of the Russian troops who fought around kyiv, many were young and inexperienced. It is likely that they were fleeing under fire.

“We made an exchange,” says Colonel Liamzin, explaining that the Russian side provided a short list of dead soldiers it wanted back.

“We are ready to return them all, we want our own dead to be returned to us as well. We knock on all the doors there are, but there is no response, there is no dialogue,” says the colonel.

The delay in collecting bodies is not unique to Russia.

Neither side in this war is transparent about the number of casualties suffered. We have spoken with several Ukrainian families who say that their own government has been of little help in recovering the remains of Ukrainian soldiers from the battlefield.

See also  High death toll from a fire in Moscow

One woman, told of her husband’s death by men in her unit, said she had been trying to recover his body for nearly three months.

But here they constantly find bodies of the Russian dead.

Right on the Zavalivka road in Sytnyaky, the village elder told us that at least 10 Russian soldiers – probably more – were killed and their bodies dumped in March.

His column was ambushed after getting lost: the locals had removed and changed the road signs.

The battle was fierce. What was once a roadside restaurant on site is now a heap of rubble, barely a chunk of wall left standing, and a giant aquarium that somehow survived the assault.

Pamphlets found in the ruins call on Russian soldiers to surrender and save their lives, and spare the blood of Ukrainian children.

The village elder says that he and others buried the Russians after the battle “for sanitary reasons.” When he looks at me in disbelief, he says that most of them were blown to pieces.

He was not allowed to show us the graves: they constitute a crime scene until Colonel Liamzin’s team can visit and exhume the remains there. But his list of digs is already long.

A local man planting beets confirms that the Russians were killed along the main road.

“It’s not humane to abandon a soldier, not bury him,” Mikola says, leaning on her shovel. His own son is in the Ukrainian army.

“My wife felt sorry for the Russians at first, but then we found out what they did here,” he adds, referring to the shooting of unarmed civilians in places like Bucha and Irpin.

“After that, no one feels sorry for the Russians,” he says.

Burnt-out remains of Russian tanks still line all the main roads into kyiv. Every few seconds cars pull up and families come out to take pictures, kids clambering over the top.

It seems kind of cathartic. The other day I saw a man exercising, lifting the barrel of a tank above his head, as if he were lifting weights.

But later that day, just a few steps across the road, we saw human remains on a charred patch of edge: a charred piece of column and a foot fragment; and a sweet, deadly smell when the wind died down. Most likely he was one of the men killed in one of the nearby tanks.

So the refrigerated train in kyiv is still filling up and there are more in other cities close to the fighting. There is little sympathy from the Ukrainian military who recover and store the bodies: the dead are enemy soldiers, invaders.

But in Russia, someone, somewhere, must be looking for every one of them.