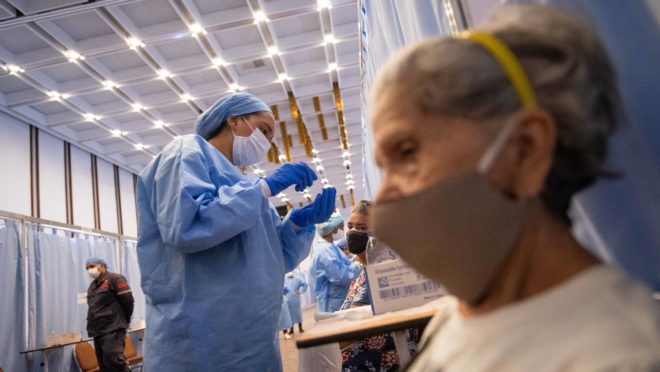 A year ago Russia proudly announced the approval of the world’s first Covid-19 vaccine. The Russian authorities’ decision, taken after just two months of clinical trials, represented a decisive step in the spread of Sputnik V in other countries, enabling the Kremlin to use it as a diplomatic tool to increase its geopolitical influence.

So far, the main Russian immunizing agent has been approved in 69 countries – although Brazil is included in this list, Anvisa only authorized the import of restricted doses – and is being used in vaccination campaigns in 50 nations on four continents. Contracts were signed with governments to send hundreds of millions of doses of the vaccine abroad.

Despite some initial resistance about the effectiveness of the immunizer, the publicity campaign got off to a good start. Kirill Dmitriev, head of the Russian Direct Investment Fund (RDIF, which financed Sputnik V), was able to exploit the fact that the leaders of the Western powers were more concerned with vaccinating their own populations than trying to compete in the international market.

Like the Chinese vaccines from Sinopharm and Sinovac, Sputnik V was presented as a lifeline for countries that did not develop their own vaccines or were unable to close deals with Western pharmaceuticals, due to the great worldwide demand for doses.

For Russia, this was especially important on the European continent. The European Union’s collective effort to buy the immunizers was initially a disaster. Vaccination in the bloc countries, when compared to those conducted in the United States and the United Kingdom in the first quarter of 2021, advanced very slowly.

Given this, some governments, such as Hungary and Slovakia, decided to do business with the Russians, while other countries, such as Germany, also seriously considered buying the formula. The EU leadership, in turn, continued to argue that the agreements it had signed were enough. “Play the member states of the [UE] against each other is naturally important for Russia,” recalled Pierre Vimont, a former French diplomat, in an interview with BBC News.

Like any issue involving Russia in the EU, vaccines have also created confusion in political arenas, leading to the resignation of the Czech Republic’s health minister and even the fall of the Slovak prime minister.

Russian vaccines also reached Africa, the Middle East, Asia and Latin America, improving Russia’s image internationally, especially after a study published in the prestigious scientific journal Lancet, in February, theensured that the effectiveness of Sputnik V was over 90%. Another important competitive factor of the Sputnik V is that it can be transported more easily.

But it wasn’t long before the problems started to appear.

Manufacturers appear to be having problems with producing the second dose component, which is different from the first dose and more difficult to produce. The increase in Covid-19 cases in Russia and the mandatory vaccination in some locations also led the Kremlin to prioritize domestic demand. As a result, millions of doses already purchased by countries around the world have not yet been delivered.

According to a survey by BBC News, Iran has contracted 60 million doses, of which five million would be received at first. However, so far, less than a million Russian vaccines have arrived in the country.

In Africa, Ghana had announced the purchase of 3.4 million Sputnik V, but as of the beginning of last month it had received only 20,000 doses. A similar situation occurred in Angola. Kenya, for its part, canceled private importation of the vaccine to the country, after the government discovered that the doses were not coming directly from Russia, but rather from an intermediary company in the United Arab Emirates, according to an investigative report by the Moscow Times.

In Latin America, the disappointment was great. The delay in delivering the doses, and the pressure of public opinion, made Guatemala cut in half, from 16 million to eight million, the contract it had with the Russian fund. The money that would go to these doses will be used to buy immunizers from Pfizer, Moderna and Johnson & Johnson – a setback for the Russians, who run an aggressive negative campaign against these manufacturers.

In Argentina, it is estimated that millions of people are waiting for the second dose of Sputnik V, whose deliveries have been delayed several times. In early July, the government of Alberto Fernández threatened to cancel the contract if Russian authorities did not send the doses.

“We urgently need something from Component 2 (second dose). At that point, the entire contract runs the risk of being publicly canceled,” wrote one of Fernández’s top advisers in a letter sent to the Russian fund. “We understand the shortages and production difficulties of a few months ago. But now, seven months later, we are still way behind as we are starting to receive doses from other providers on a regular basis, with schedules that are adhered to,” he added, also citing that now Argentina was able to close contracts with American pharmaceuticals.

The Argentine government tried to put warm cloths on the case, minimizing friction with Russia, but the letter, leaked to the press, is another example of the importance of geopolitical issues in the countries’ vaccination strategies.

After what happened, the Argentines finally got approval for the production of the second component at a local factory.

Delays have also occurred in Mexico, Honduras and Venezuela. Brazil, in turn, did not incorporate Sputnik V into its immunization program against Covid-19.

But it’s not just production delays that are hampering the Kremlin’s vaccine diplomacy. Sputnik V has not yet been approved for emergency use by the World Health Organization (WHO), nor by internationally recognized health regulators such as the European Medicines Agency (EMA).

On Wednesday, Russian Foreign Minister Serguei Lavrov commented on the wait for the drug to be approved in the EU: “We are convinced that when it comes to the health and life of human beings, there is no place for politics . I hope our partners in the European Union will take this into account,” he told the Russian newspaper Komsomolskaya Pravda.

In this context, however, Sputnik V had an important victory this week: bloc officials informed that the digital certificate of vaccination of San Marino, where the majority of the population was immunized with the Russian product, will be accepted in European Union countries as equivalent to those issued by countries in the bloc.

The importance of Sputnik V for global immunization against Covid-19 has also begun to eclipse as the United States and other Western economies have become more active in the international vaccine market, whether donating vaccines to poor nations through Covax or the agreements between laboratories and governments – exemplified in the case of Argentina, which recently signed a contract with Pfizer.

Against this backdrop, Russian analysts from Carnegie Endowment for International Peace Paul Stronski and Grace Kier concluded: “Sputnik V is proving to be another example of Russia’s ambitions that exceed its capabilities.”