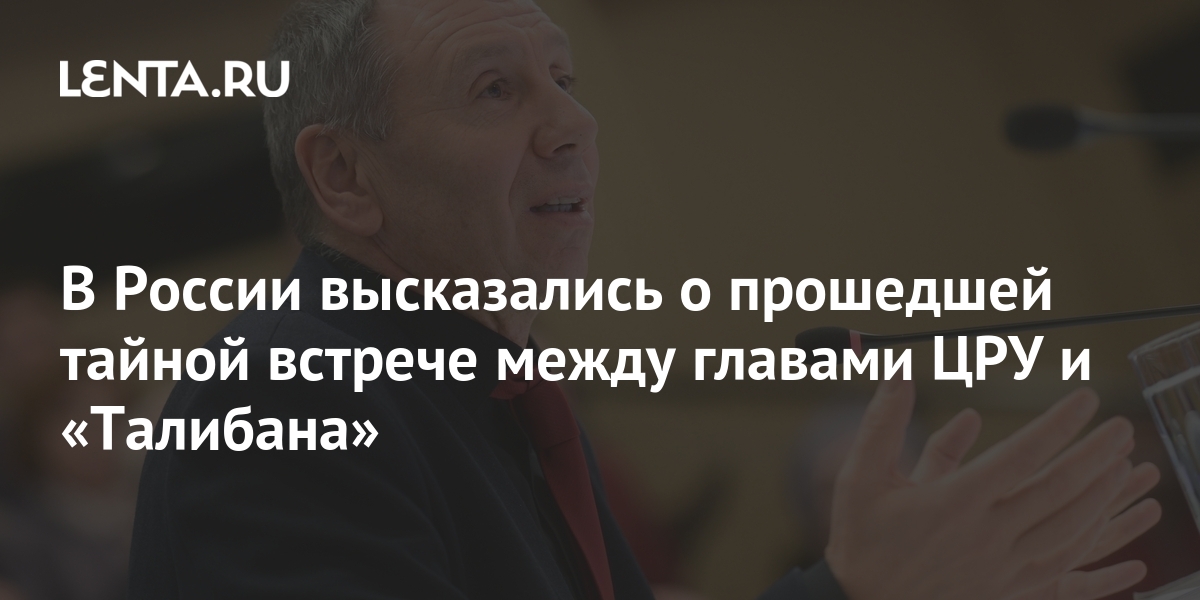 Director of the Institute for Political Studies Sergei Markov suggested that CIA Director William Burns and the head of the political office of the radical Taliban movement (banned in Russia) Abdul Ghani Baradar. According to the expert, there is no secret that negotiations are underway between the United States and the terrorist organization. However, the publication of the fact of the meeting at such a high level testifies to an attempt to raise the political authority of the President of the United States of America Joe Biden, Markov said. The expert shared his opinion in an interview with Lenta.ru.

According to The Washington Post, the meeting between Burns and Ghani Baradar took place on Monday, August 23, in Kabul and became the first negotiations held at such a high level between representatives of the United States and the Taliban since the militants seized power in Afghanistan. The CIA declined to comment on the meeting, however, most likely, the parties discussed issues related to the approaching deadline for the Americans to evacuate their military and allies from among Afghan citizens – August 31.

As the newspaper notes, the very fact of negotiations between the head of the CIA and Baradar looks rather ironic, since the employees of this particular American agency in 2010 took part in the operation to capture the militant.

Sergei Markov in a conversation with “Lenta.ru” noted that the demonstration of the fact of the meeting between Burns and Ghani Baradar is needed as a PR-action for Joe Biden. According to the political scientist, the essence of this publication in The Washington Post is to demonstrate to the world control over the situation by the states.

“The Americans do not hide that they are in contact with the Taliban, that they are negotiating with them on many issues. The news is rather to focus on the fact that the dialogue is being conducted at a high level. I think this was done in order to reduce the pressure of criticism against Biden, ”the political scientist said.

According to Markov, after the events of August 21, when US soldiers hastily left Afghanistan, the world was presented with an unpleasant picture, which testified to the inability of the Americans to organize the normal evacuation of their own people.

“The Taliban demanded that the Americans finish the entire evacuation from the Kabul airport by August 31. Well, they definitely won’t finish it. They had at least 400 thousand people in Afghanistan. It is necessary to evacuate these people and their families. With a rough calculation that each had a wife and a child, we get 2 million people. And America said that it is ready to accept so far only 20 thousand people, that is, 1 percent. How and where will they take the rest? ”Asked Markov.

The political scientist stressed that the Americans are making a huge mistake by not inviting Russia and China as intermediaries or mediators. According to him, pride does not allow the United States to take this step and it was she who led the states to defeat in Afghanistan.

Markov also spoke about the impact of the secret negotiations between Burns and Ghani Baradar on Russia. “This meeting means that the Americans are worse for us than the Taliban, since the latter is ready to negotiate with us, but the United States is not. Even in such a difficult situation, they do not want to invite Russia and China as intermediaries, which would be very reasonable, correct and beneficial for the Americans. But they see Russia as a country more hostile than the Taliban, ”said the director of the Institute for Political Research.

The United States must complete the evacuation of all of its citizens in Afghanistan by August 31. At the same time, American President Joe Biden announced that he was discussing the issue of extending the evacuation time for the American military and Afghan citizens who collaborated with the United States from the Kabul airport. In turn, representatives of the Taliban said that the United States did not apply for an extension of the term, and threatened Washington with a military response in the event of an untimely withdrawal of troops.

Baradar is the leader and warlord of the Taliban. He was deputy and close friend of Mullah Mohammed Omar and the head of the council, Quetta Shura. In the late 1990s, Baradar ruled several provinces in Afghanistan as a Taliban representative. In 2002, after the US invasion of Afghanistan and the overthrow of the Taliban regime, he fled from his native province of Urzugan to Pakistani Karachi. In 2010, as a result of a joint operation of Pakistani intelligence and the CIA, Baradar was captured. In 2018, after several years in prison, he was released.