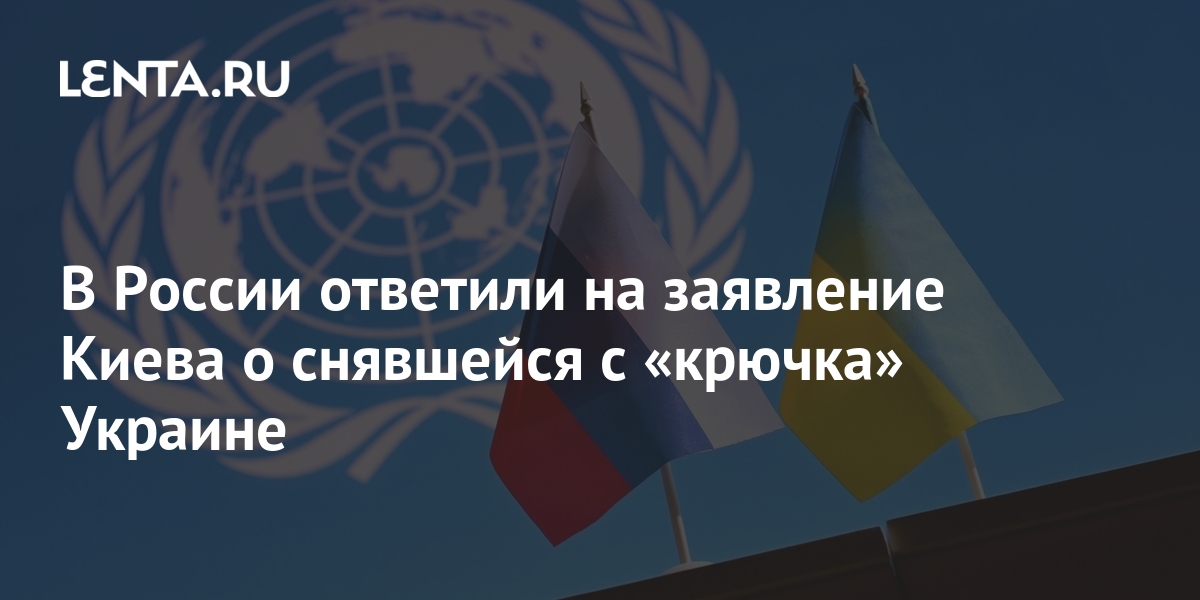 The Russian Foreign Ministry, the Federation Council and the State Duma responded to the statement of the speaker of the Kiev delegation to the Trilateral Contact Group (TCG) in Donbass, adviser to the head of the office of the President of Ukraine, Oleksiy Arestovich, that Kiev may not fulfill the Minsk agreements, since it has taken off the hook.

The official representative of the Russian Ministry of Foreign Affairs, Maria Zakharova, in her Telegram channel, compared Ukraine to fish sitting in a frying pan. She also admitted that she “loves with her ears” Arestovich.

“This is what I successfully pulled off the hook. It has broken through, a great achievement, ”thought the fish, comfortably sitting in a frying pan, and mentally conveyed greetings to the fishermen. Arestovich, say more – I love you with my ears

Zakharova recalled that in April, Russian Foreign Minister Sergei Lavrov said that Zelensky’s team was “wriggling as best it can” in attempts to turn the Minsk agreements upside down and they should not be “let off the hook.” Arestovich answered these words.

Federation Council member Sergei Tsekov in a conversation with “Lenta.ru” said that Kiev’s refusal to comply with the Minsk agreements could turn into serious problems. Tsekov explained that, in the opinion of the United States and Ukraine, responsibility for the conflict in Donbass lies solely with Russia, because the Minsk agreements do not bear any force.

A similar position was voiced during a meeting between the presidents of the United States and Ukraine, Joe Biden and Volodymyr Zelensky, and this is what allowed Arestovich to make such loud statements. But I would like to add that, although the United States has taken on the role of world gendarme, they are not judges, it is not for them to decide the fate of the Minsk agreements.

on the possible refusal of Ukraine from the Minsk agreements

He added that he would advise Ukraine to “look at Afghanistan and other countries,” which showed that US intervention ends in “suffering” of the people. According to the senator, this has already happened in Ukraine. The politician called the States provocateurs, who, instead of sincerely fighting for peace, encouraging the implementation of the Minsk agreements, by their actions only inflame the conflict in the region. The Ukrainian authorities do not grant a special status to Donbass and do not introduce appropriate amendments to the constitution, which is the main thing, Tsekov assured.

The head of the State Duma Committee on International Affairs Leonid Slutsky also commented on the statement of Alexei Arestovich. The parliamentarian answered him that the Minsk agreements are aimed “at preserving the territorial integrity of Ukraine, taking into account the observance of the rights of residents of the southeast of the country,” and stressed that there is no other alternative to this. In addition, Slutsky pointed out that since February 2015, Kiev “has been delaying (if not directly sabotaging) the implementation of Minsk-2 in every possible way.” According to the deputy, Ukraine is “on the hook” of the Western countries and remains under external control in the “anti-Russia” project.

On September 3, Aleksey Arestovich said that Kiev is no longer obliged to comply with the Minsk agreements to resolve the conflict in Donbass. “This hook doesn’t really exist anymore. Or, at any rate, Ukraine and Zelenskiy are no longer on the hook. Lord [Сергей] Lavrov (Minister of Foreign Affairs of Russia – approx. “Lenta.ru”), I say hello to you: we are off the hook of the Minsk agreements, ”Arestovich said.

According to him, during a conversation between Ukrainian leader Volodymyr Zelensky and US President Joe Biden, the republic’s authorities were convinced that the United States did not intend to “reset” relations with Russia. He noted that the Americans against the background of events in Afghanistan and close ties of Russians with the Taliban (the Taliban, a terrorist organization banned in Russia) realized that Russia is the main enemy of the United States. Arestovich also recalled the escalation of tension in Avdiivka, which was allegedly fired by the militias of the unrecognized republics of Donbass, and the aggravation of the migration crisis by the forces of Russia and Belarus. All these events, in his opinion, allowed the republic to free itself from the obligation to comply with the Minsk agreements.

On September 1, talks were held in Washington between President of Ukraine Volodymyr Zelensky and American leader Joe Biden. The parties issued a joint statement against the Nord Stream 2 gas pipeline. Zelensky also offered Biden new formats for participating in negotiations on the Donbass and agreed with Biden on further countering “Russian aggression.”