Russia reacted to Lukashenko’s words about the recognition of Crimea 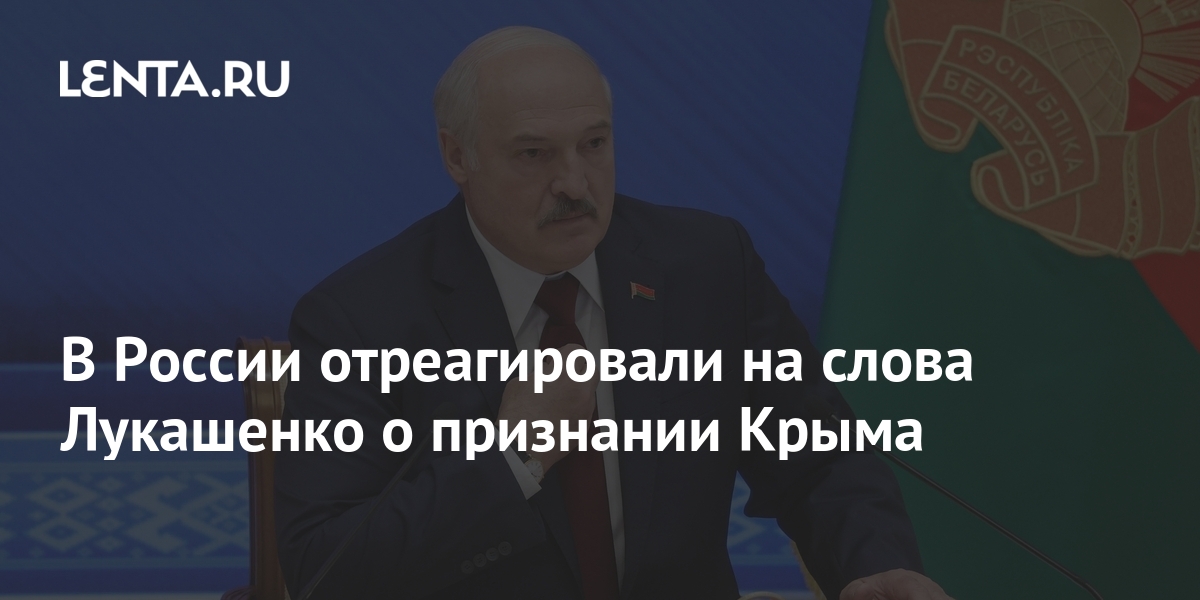 Russian politicians and public figures reacted to the words of the President of Belarus Alexander Lukashenko about the recognition of Crimea as part of Russia. The Belarusian leader named the condition for this during the Big Conversation, the recording is available at Youtube…

Lukashenko said that he would recognize the peninsula as Russian only after all Russian oligarchs did it. “Though a lot connects me. Budapest Declaration. Remember we signed it? Nazarbayev, Yeltsin, Lukashenko, Clinton, Tony Blair or whoever was there in Great Britain. We signed it, read it. My signature is there. But I will step over this too, ”he said.

When the last oligarch in Russia recognizes Crimea and starts supplying products there, the matter will not rust with me

According to the Belarusian leader, because of the actions of the Ukrainian authorities, his hands are free. “They howled:“ Lukashenka will fly to Crimea through Russia! ” So I can’t fly through Ukraine. Madmen, ”he recalled.

Lukashenka’s statement was immediately reacted on the peninsula itself. Ruslan Balbek, a State Duma deputy from Crimea, expressed the opinion that such a position would not bring the Belarusian president closer to Europe, but at the same time “would cause bewilderment among Russians from this behavior of an ally.” “You won’t be able to sit on two chairs, but you have already managed to offend the Russians,” he said.

State Duma deputy Natalya Poklonskaya pointed out that Lukashenka avoided a direct answer to the question about the status of the peninsula. The message to the Russian oligarchs remained incomprehensible to her. The politician called on the Belarusian leader to visit Crimea first, and only after that talk about his status, and also assured that the peninsula would recognize Belarus.

Member of the Federation Council Olga Kovitidi considered Lukashenko’s statement about Crimea inappropriate. According to her, Crimea is a “political reagent” showing the true attitude of the Belarusian leader towards Russia. TV presenter Vladimir Solovyov called Lukashenko’s condition short-sighted, as it makes his political decisions dependent on the actions of “foreign oligarchs”. “

According to political scientist Sergei Markov, Alexander Lukashenko is in no hurry to recognize Crimea as part of Russia, because he fears the introduction of new sanctions against Minsk, which could negatively affect the country’s economy. At the same time, he called the statement of the Belarusian leader a logical reaction to Russian public opinion. “The public opinion boils down to the fact that, by not recognizing Crimea, Lukashenka thereby renounces the role of a real ally of Russia, leaving a path for himself to retreat,” he explained.

At the same time, on June 1, Lukashenko mentioned the opening of flights from Belarus to Crimea. Then he asked Russian President Vladimir Putin to resolve this issue, since Ukraine closed the airspace for Belarusian aircraft after the incident with the Ryanair airliner. In the event of the start of flights to the peninsula, Kiev threatened Belarus with immediate sanctions.

Crimea became part of Russia in March 2014 after a referendum in which the overwhelming majority of those who voted in the region supported such a decision. Ukraine, the EU countries and the United States refused to recognize the results of the vote, calling the reunification of the peninsula with mainland Russia an annexation. The Russian authorities reject these allegations and insist that the accession procedure was in accordance with international law.

Germany leads the quantum race with Europe’s most powerful computer

Richard Sánchez goes to Europe or stays in America