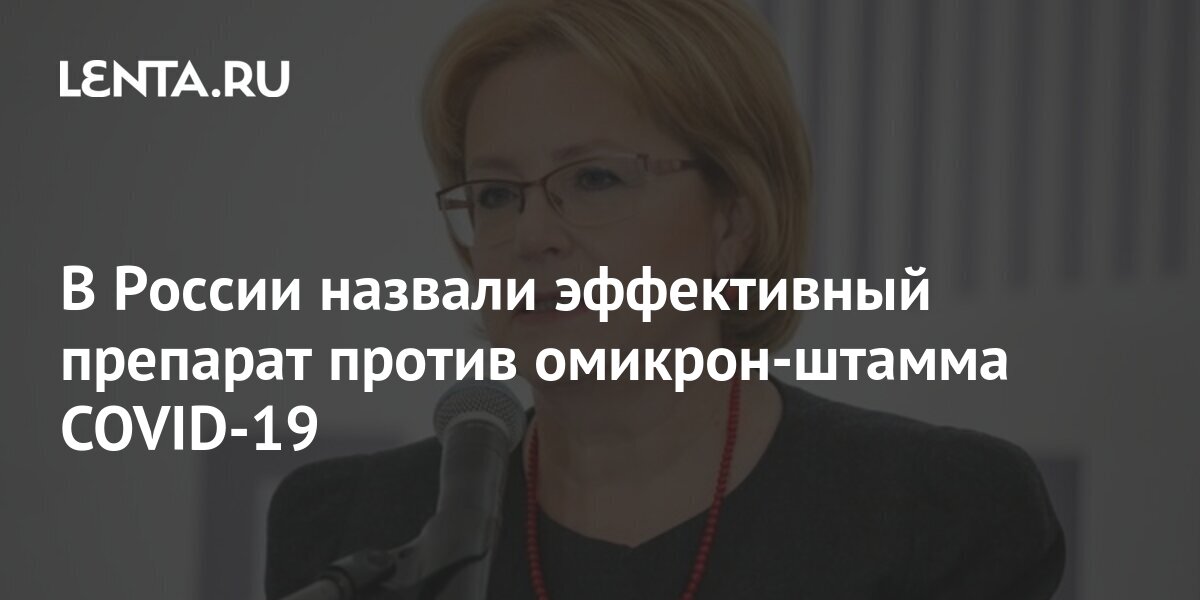 The head of the Federal Biomedical Agency (FMBA) of Russia, Veronika Skvortsova, said that the drug against COVID-19 “MIR-19” will be effective against the omicron strain. She named the drug on the air of the channel “Russia 24”…

We looked at 800 lines of different SARS-Cov-2 virus, and the sequence on which this drug acts, it does not have a single mutation, including in the omicron

Head of FMBA of Russia

Skvortsova also said that she had tested the drug for the coronavirus “MIR-19”.

Yes, I’ve tried it. I naturally try everything that we develop, just like my employees

Head of FMBA of Russia

According to her, the drug has a sweetish taste, it must be inhaled within 10 minutes. If you breathe the drug after contact with a sick person, the viral load on the body drops sharply, added Skvortsova.

FMBA received registration for MIR-19 in April 2021. The drug is developed on the basis of microRNA, it is safe for humans and does not affect its genome and immunity, said the head of FMBA Veronika Skvortsova. The medicine turns off the copying of the virus and prevents severe forms of the disease. It can be administered by inhalation or intranasally. It is safe for humans, does not affect their genome and immunity.

FMBA is ready to do a test to detect the omicron strain of coronavirus in nine days, Skvortsova said. According to her, the design takes three to four days, and it will take another five days to create the test system itself. Skvortsova added that the new version of COVID-19 is interesting in that it actually summarized the mutations that were accumulated by the previous strains.

At the same time, the director of the Gamaleya Center, Alexander Gintsburg, said that experimental work to create a vaccine against the new omicron coronavirus strain would take no more than ten days. According to the doctor, the approval of the new vaccine by the Ministry of Health may take another month and a half, if the department takes into account the conditions of the emergency.

This usually takes two to two and a half months. If, accordingly, there is an emergency situation that now exists, and the Ministry of Health will tighten up all regulatory and licensing procedures, then I think that it is possible to keep within <...> 45-50 days at most

Director of the Gamaleya Center

The RDIF, in turn, announced the possibility of creating a new version of the vaccine. Kirill Dmitriev, head of the Russian Direct Investment Fund (RDIF), spoke about the readiness to create a sufficient number of booster doses of the Sputnik V vaccine to combat the omicron strain by February 2022.

Should modification be required, we will provide several hundred million booster doses of the modified Sputnik Omicron vaccine by February 20, 2022

At the same time, Dmitriev said that the center of Gamaleya believes that the already existing Sputnik V and Sputnik Light vaccines should be effective against the new strain

Earlier in November, it became known that specialists from the Central Research Institute of Epidemiology of Rospotrebnadzor are developing a new rapid test for coronavirus, which will be more accurate in the presence of new mutations in the pathogen’s genome.

According to the British Joint Committee on Vaccination and Immunization, when a person becomes ill with the omicron strain of coronavirus, the heart rate increases and fatigue increases. Cases of the omicron strain have not shown particularly severe symptoms, according to the organization. Those with this type of coronavirus do not even lose their sense of smell. However, experts emphasize that the new strain is still poorly understood and it is too early to talk about symptoms.

Epidemiologist, Candidate of Medical Sciences Alexander Vygonaylov believes that the omicron strain of coronavirus is able to bypass antibodies in COVID-19 patients. A large number of mutations in the Spike protein (S protein) give this ability to the strain. Virologist Pyotr Chumakov has linked mutations of the omicron strain to AIDS. He stated that the new variant of the coronavirus has multiple mutations due to the large number of people with immunodeficiency who live in the area of ​​its origin.

The first reports of infection with the new strain in South Africa, Botswana and Hong Kong appeared on 24 November. Later, news about the discovery of another variant of the evolution of COVID-19 appeared in Israel and Belgium.

Juve, burned 1 billion on the stock market in almost 3 years. And watch out for Consob