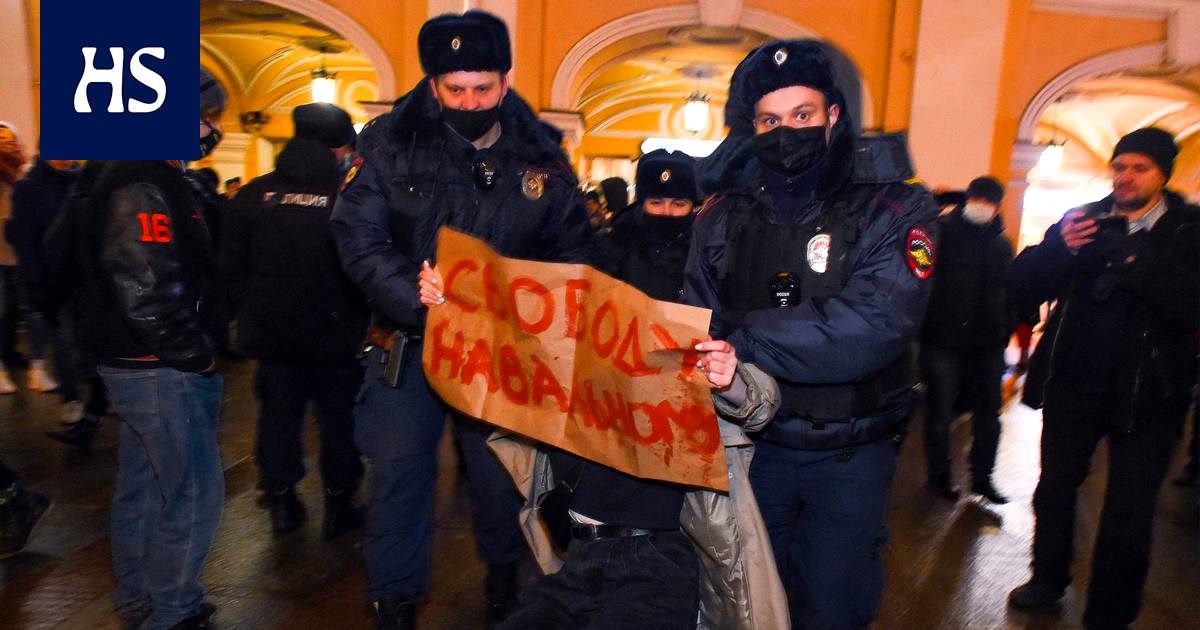 Navalny’s allies have encouraged people to take to the streets on Saturday despite pressure from the authorities. During the week, protest-minded videos of schoolchildren have taken over social media.

According to a police release issued on Friday, unauthorized public events and all provocative activities are considered a threat to public order and are immediately suppressed.

Navalni supporters have planned demonstrations for Saturday. Despite the message from the authorities, Navalny’s allies have urged people to take to the streets and promised them financial support in case of possible fines.

“Putin is doing everything he can to intimidate you,” Navalnyin anti-corruption FBK Foundation Ivan Ždanov said on Facebook.

Authorities started as early as Thursday I grabbed the arrests of the allies. Police raided Navalny’s press chief in the evening Kira Jarmyšin home in Moscow. On Friday, a Russian court jailed Jarmysh for nine days and he will not be able to take part in Saturday’s protest.

“Our future literally depends on the number of people taking to the streets,” Jarmyš said on Twitter before his arrest.

The prosecution has also warned Navalny supporters not to demand protests after the Navalny Foundation’s revelation video of “Putin’s Palace” has sparked a spirit of protest on social media.

A video released on Tuesday tells the story of a billion-dollar palace on the shores of the Black Sea that is allegedly being built by the president To Vladimir Putin.

The video urges citizens to join large-scale anti-Kremlin demonstrations this weekend. By Friday afternoon, the video had already been viewed on Youtube almost 56 million times.

Read more: The Navalny Foundation released a video of a billion-dollar palace to be built for Putin on the Black Sea

A Kremlin spokesman said on Friday Dmitry Peskov again denied that the palace belonged to Putin. He says the president has nothing to do with the matter, and the palace may belong to some businessman.

Video since the release, Navalny supporters have expressed their support for him on social media and released their own videos urging people to take to the streets on Saturday.

Among other things, the children have filmed Tiktok videos in which they prepare for the protests planned for Saturday by packing and dressing up. Some schoolchildren have taken portraits of Putin down from school walls and replaced them with images of Navalny.

In social media images, schoolchildren are estimated to be in middle school and high school. Authorities have tried to hold schools and parents accountable for keeping youth out of protests.

Russian Roskomnadzor, the authority responsible for censorship of online communications required Tiktok to block videos, where minors are incited to engage in illegal activities.

Opinions on behalf of Navalny, however, have spread among VKontak, Russia, which corresponds to Facebook, the image service Instagram and even the dating application Tinder, among others. Authorities have systematically closed all pages of VKontakte, or VK, which issued calls for demonstrations, the news site says. Jellyfish.

August recovered from novitok poisoning Alexei Navalnyi returned from Germany to Russia on Sunday. He was arrested immediately at the airport because Russian authorities believe he has violated the terms of his conditional sentence.

Navalnyi was sentenced to 30 days in prison on Monday in a trial at a police station.

In addition, Navalnyi is accused of insulting the honor of a war veteran. Navalny allegedly criticized a veteran who appeared in a video promoting the constitutional amendment last summer. Under the new constitution, Putin can remain in power until 2036.

The investigation into the case began last summer, but was therefore suspended while Navalnyi was being treated at a hospital in Germany.

Navalny is scheduled to appear in court again in February.

Equality The Chinese woman did the housework for five years: The court ordered the divorced man to pay for the work

Top 10 Richest Billionaires Could Pay For All Covid-19 Vaccines, According To Oxfam