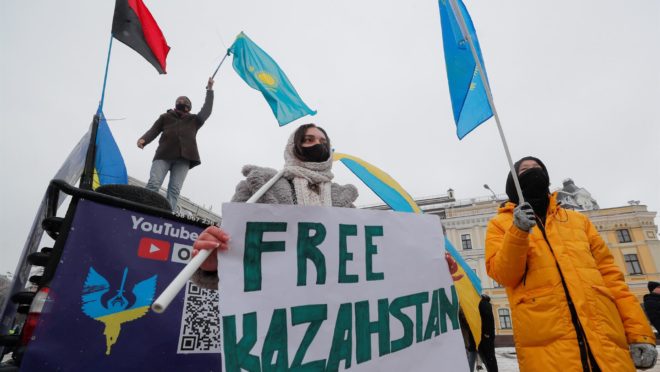 0
SHARES
1
VIEWS
Share on FacebookShare on Twitter
Demonstration in solidarity with the protests in Kazakhstan, held in Kiev, capital of Ukraine, last weekend| Photo: EFE/EPA/SERGEY DOLZHENKO

A day after the United States and Russia began a series of talks on the crisis of the concentration of Russian troops on the border with Ukraine, 3,000 Russian soldiers began this Tuesday (11) live and tank exercises in the west of the country, some of them close to the Ukrainian border.

Washington and Moscow seek a solution to the impasse of the concentration of Russian troops on the border with Ukraine, which began last year. Ukraine estimates that about 100,000 Russian troops are already concentrated on the border and fears an invasion along the lines of the annexation of Crimea and the Moscow-backed separatist movements in the Donbass region, both in 2014.

The government of Vladimir Putin claims that it aims only at self-defense and, in the talks that are being held this week in Europe, demands measures such as the veto of an eventual entry of Ukraine into the North Atlantic Treaty Organization (NATO) and that they are not carried out. military activities of the Western military alliance in countries that were part of the Soviet Union. The United States finds these demands unacceptable.

On Monday, American and Russian diplomats met in Geneva, Switzerland. Two other meetings will be held this week: on Wednesday (12), there will be a debate within the framework of the Russia-NATO council in Brussels, and on Thursday (13), a conference of the Organization for Security and Cooperation in Europe in Vienna, the only one of the three meetings in which Ukraine will be directly represented.

Wendy Sherman, deputy secretary of state and leader of the American delegation in Geneva, called after the meeting on Monday for the demobilization of Russian troops on the Ukrainian border so that the dialogues could move forward. “They can prove that, in fact, they have no intention [de invadir a Ucrânia] demobilizing and making the troops return to the barracks”, he declared.

In another crisis in a former Soviet republic, the president of Kazakhstan, Kasim-Ymart Tokayev, announced on Tuesday the beginning of the withdrawal of troops from the Collective Security Treaty Organization (OTSC) in two days.

Tokayev had asked the CTO – a Russian-led military alliance that also includes Armenia, Belarus, Kyrgyzstan and Tajikistan, as well as Kazakhstan – for help on the 5th to suppress protests that he defined as a “terrorist threat” to the country.

The Kazakh leader also unveiled a series of measures to quell public discontent after violent anti-government protests that began after a rise in gas prices.

He ordered the government, whose new prime minister, Alikhan Smailov, was approved by parliament on Tuesday, to create a program to “increase the income of the population within two months”.

Tokayev also called for the creation of a public social fund to solve “real problems in the areas of health, education and social assistance” and restructuring of the activities of the Development Bank of Kazakhstan, in addition to having declared a moratorium on salary increases for members of the government, regional governors and deputies and announced a reform of the civil service.

Demands for early dismissal .. Did Queiroz fail completely with the Egyptian national team?

Mohammed bin Rashid: The future is the responsibility of all governments