Running lights of the revolution: what surprised the Korean crossover 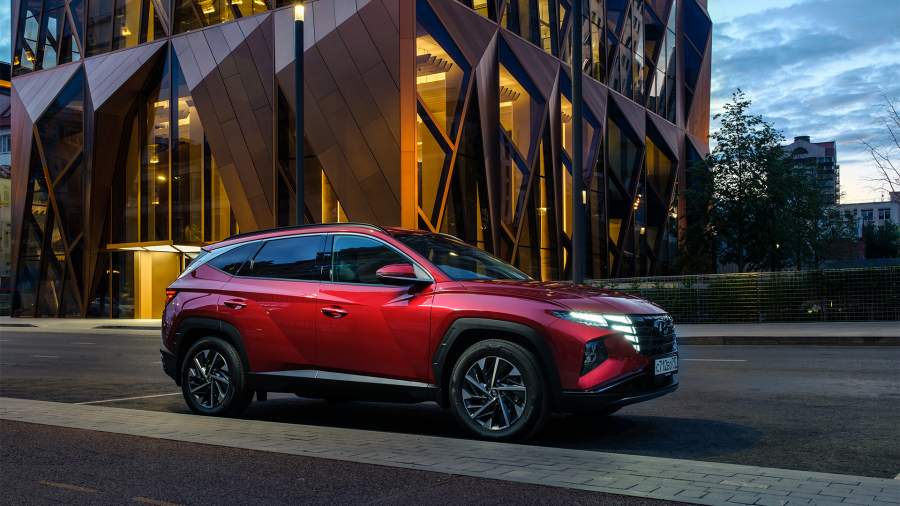 The new Hyundai Tuscon looks like a crazy concept that escaped from the pedestal of some international auto show. Fancy headlights, broken body lines, a tablet in front of the driver. Izvestia has found out how such an unusual car drives and what else it surpasses its competitors in.

Whatever automakers did with such a seemingly purely functional element like a headlight. For aerodynamics or just aesthetics, they were forced to retract into the hood and even hidden behind the grille. With the development of LEDs, a competition in showiness began: straight lines, curved, dotted, luminous crystals, creeping lines of turn signals. Some brands also began to illuminate the radiator grill.

Hyundai went further and made a real revolution – in the new Tucson, the elements of the radiator grille themselves are made luminous. These are just running lights, the head light is located below, in the current fashion, the second tier, but it is ordinary and therefore invisible.

Daytime running lights follow the pattern of the radiator grille, headlights are located below

Direction indicators are located in the corners

The rear wiper is hidden under the spoiler. The logo only seems three-dimensional

The direction indicators did not find a place in the lanterns, they are located in the rear bumper

The declared volume of the trunk is 539 liters

If the backrests are folded down, it increases to 1903 liters.

You drown the car – the glowing triangles around the edges go out and merge into a glossy black monolith. Even the nameplate of the crossover is made black.

But before us is the case when the car is sold not by the nameplate, but by the design. PIn fact, it is a showcase of Hyundai’s achievements – not only in design, but also in technology. Broken lines in the “despair of a tinsmith” style, deep stamping, precise matching of body parts – all this demonstrates the capabilities of the presses of the South Korean enterprise.

We are used to the fact that every new Hyundai car is not similar to the previous one, but Tucson is fundamentally different from other models of the Korean brand. Except, perhaps, for the new Elantra. From it, the fusion of the radiator grille with the head light and the “crumpled paper sheet” style began, for which Hyundai came up with the fanciful name “parametric dynamics”.

For the sake of clean lines, the rear wiper was hidden under the spoiler, but at the same time they could not integrate the turn signals into the huge, fanged lights. Making a section that changes color from red to yellow turned out to be expensive, and this is still a massive segment. Therefore, the turn signals were placed in the sections on the rear bumper, where, alas, they are not always visible.

The designers also worked on a body kit made of unpainted plastic, characteristic of crossovers – faceted door sills, protection of arches with imitation of air ducts, a relief belt made of rhombuses on the rear bumper.

In the interior, the revolution becomes permanent, as in some banana republic. Nowadays, you won’t surprise anyone with a tablet with painted dials instead of a dashboard, but here the tablet lacks a visor. Hyundai decided that the anti-reflective coating of the screen would be enough to make out the readings of the instruments even in bright sun.

Air ducts in the entire or almost the entire length of the front panel is also nothing new – remember the same “Elantra”. But if for a sedan this is just a design element, then for a crossover the airflow system is solved in a new way. Rows of holes are made between the traditional air ducts, through which the air flow is gently diffused. It will not blow in hot weather.

Telematics is conquering the mass segment. The Bluelink application has already been announced for the new “Creta”, and there it is able to send pictures from all-round cameras. Tucson does not yet know how to do this, but it can remotely, using a smartphone, start the engine, set the temperature of the climate control, open the central lock, and lower the windows. You can also find a car on the map and send the point of interest to the standard navigator.

The futuristic interior is available in four colors, but only for top-of-the-line vehicles

The older Santa Fe already has remote parking with a key fob, but this is still a rarity in the Tucson segment. However, the crossover can move back and forth in this way. Finding itself dangerously close to the side of a car standing next to it, the car stops by itself, as if to say: maybe it is not necessary. If you stubbornly hold the button on the key fob, it will move a few more centimeters, but will not allow you to make an accident in the parking lot. EIf, however, a pedestrian crosses the path of the leaving Tucson, the car turns the wheels, as if frightened, and immediately stands rooted to the spot.

The new Tucson borrowed from the automotive aristocracy not only diffuse airflow. The audio system is from the hi-end speaker manufacturer Krell, appreciated by audiophiles. The shape of the front panel with “wings” diverging from the center console looks like it was spied on the old Bentley Continental GT or the new Ferrari Roma.

Behind all this riot of colors, at first you don’t notice that the finishing materials are typical for the mass segment. There are also mistakes in ergonomics. The driver finds himself in a cramped cockpit, but there is no feeling that you are sitting in a sports car. Moreover, according to official data, the salon sounded a little in the shoulders.

On the left, the door armrest protrudes, on the right – a wide and humped central tunnel. The chair has a thick back, and the pillow, even at the lowest point, is still high. At the same time, in order to press the push-button transmission selector, not to mention the parking brake button, seat heating and steering wheel buttons, you have to pull your elbow back. And if you try to sit further away, the rim of the steering wheel covers the digital display of the dashboard.

The dashboard is devoid of the usual visor

Through rows of holes in the center, air is gently dispersed

For diesel cars and cars with a gasoline engine 2.5, the “automatic” selector is push-button

For gasoline two-liter crossovers, the selector is normal

In addition to road modes, there are off-road modes – for various types of coverage

The driver’s cockpit is cramped, but the seat cushion is high.

The front seats are equipped not only with heating, but also with ventilation. The steering wheel and windshield are heated

Why shrink so much is unclear. The new Tucson is much larger than its predecessor, especially since they brought to us not the standard “short” version, but an elongated one. Now, with a length of 4630 mm, the crossover is exactly between the Toyota RAV4 and Nissan X-Trail. And in terms of the distance between the axles, it is almost a record holder – 2755 mm, except for the Skoda Kodiaq.

Only the passengers of the second row benefited from the increase in size – the space here is just a limousine, you can sit down with your legs crossed. In addition, the backrest tilt adjustment is finely “chopped”, you can fine tune it for yourself. Thanks to the extended rear overhang, the trunk has increased from 488 to 539 liters. In some countries, the model is offered with a third row of seats, but in Russia this option will not be available. But a full-size spare tire was placed in the spacious underground.

Despite its avant-garde looks, the new Tucson is technically designed in the same way as other crossovers. Moving to the new N platform affected mainly the rigidity of the body. For Russia, Hyundai has completely chosen a conservative approach – no hybrids or robotic transmissions. Gasoline engines are capable of running on 92nd – both the base 150-horsepower 2.0 and the technically advanced 2.5 unit. The latter is able, depending on the load, to change the injection to distributed, combined or direct. With the base four comes a 6-speed manual or automatic with the same number. With a 2.5 engine – automatic transmission with eight steps. The same is paired with a diesel engine (186 hp).

The petrol 2.5 in Hyundai is considered an alternative to the diesel – the power is even slightly more, and the acceleration to hundreds is completely the same – 9.4 s. Diesel, of course, is faster and more economical, the declared consumption is 6.3 liters. In addition, it can carry a heavier trailer. At the same time, the petrol car is more comfortable – it is quieter, and the suspension is softer. And in the convenience of traction control, it is preferable – the automatic machine changes gears faster and more logically, without theatrical pauses.

The top gasoline engine is even more economical than the base two-liter one, on average by almost a liter: 7.6 versus 8.4 liters per 100 km. According to the on-board computer, it consumed about 10 liters, which is also not bad.

Tucson rides quite usually, safely, predictably. Sometimes this desire for security is even annoying. For example, each time the engine is started, the lane tracking system is activated, which was previously deactivated.

The chassis settings are comfortable, the car reacts unexpectedly softly to a short steering wheel. The sport mode is of little use, especially since it makes the steering wheel unnecessarily heavy. Even on 19-inch wheels, the crossover does not collect trifles from the road and drives along the country road without any problems.

A reason to overpay?

Seriously grown Tucson seriously and has risen in price – from hundreds to several hundred thousand rubles. The basic version with a 2-liter engine and front-wheel drive and mechanics will cost 1,869,000, the surcharge for an automatic machine is 60,000 rubles.

The starting configuration includes six airbags, heated front seats, 17-inch wheels and even a leather steering wheel. Air conditioner – the simplest, two-zone climate is available in the following configuration. As well as four-wheel drive – 2,059,000 with mechanics and 2,199,000 with an automatic transmission. Cars with a 2.5 petrol engine were estimated at 2,269,000, and with a diesel engine – at 2,519,000 – all by default with four-wheel drive and an 8-speed automatic.

Prices are quite within the market, except perhaps for the top version of the Visioner – 2.9 million with a gasoline engine and 3 million with a diesel engine. Only it allows you to choose the color of the interior, offers a panoramic roof, 19-inch wheels and a set of electronic assistants, including a car park.