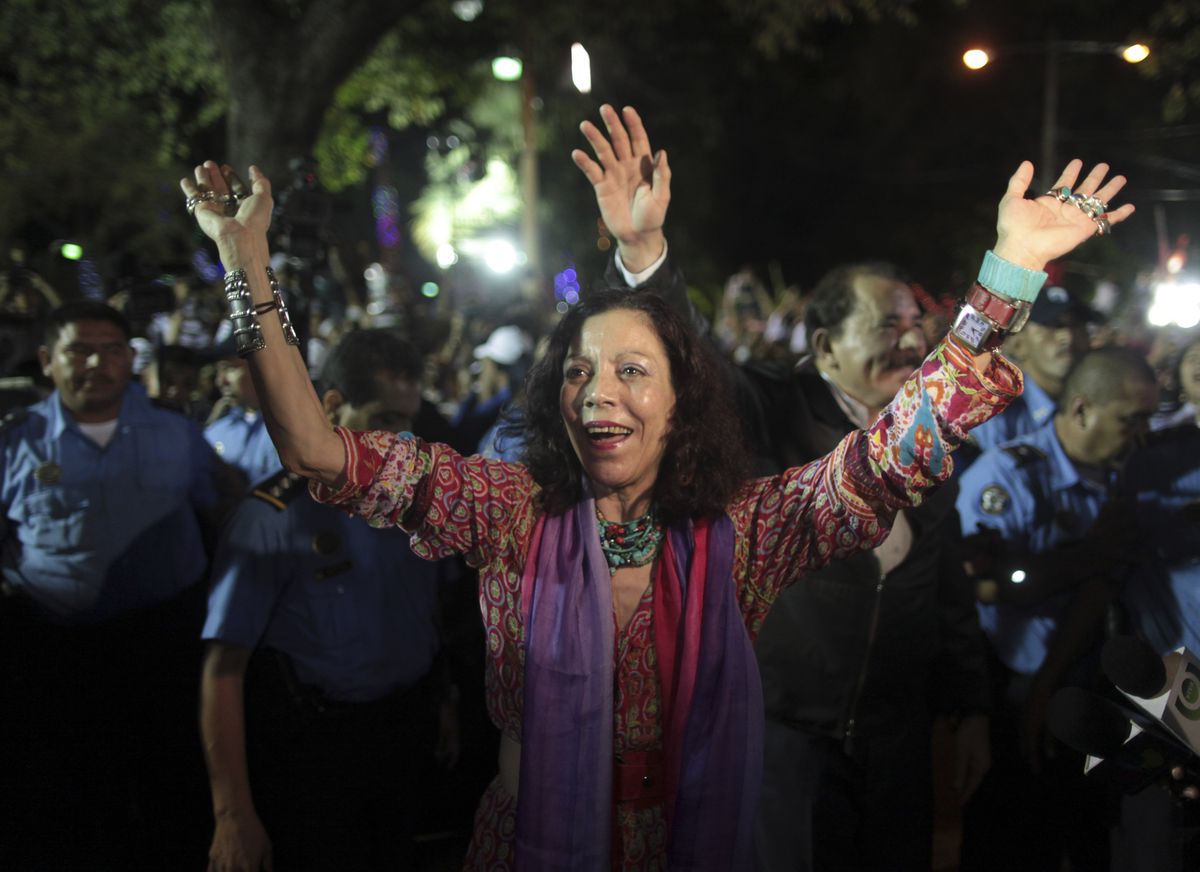 When protests demanding the end of President Daniel Ortega’s term broke out in the spring of 2018, his wife and vice president, Rosario Murillo, was in charge of the initial response of the regime. “Let’s go with everything” was the order he gave to his subordinates, which unleashed a repression that left hundreds of deaths, dozens of political prisoners and thousands of exiles. In those first tragic days of April, Ortega did not show his face. Some sources speculate that he was in Cuba, undergoing medical treatment, but the truth is that it was his wife who responded to what the Executive would later call an attempted coup.

Tense, decomposed, harsh, Murillo appeared on the television networks that her children control in Nicaragua to rant against the protesters: “Tiny!” “Vandalism”, “plagues”, “criminals”, “vampires”, “terrorists”, “coup plotters” and “diabolical”. “Not pass! The diabolics will never be able to rule Nicaragua ”, he affirmed. Irritated by what she saw as an affront, Rosario Murillo showed that she would not be willing to have the power that she had longed for for decades taken away from her, for which she had faced key figures of Sandinismo, whom she pushed aside, persecuted the intellectuals, declared his daughter crazy when he accused Ortega of rape to save the figure of a former guerrilla in low hours, until he managed to become the commander’s right hand. The “eternally loyal,” Ortega named her when he declared her his vice president.

Nothing in Nicaragua moves without her, Comrade Rosario – as Ortega’s followers call her – having given her consent. Murillo is always on a par with Ortega, he manages the day-to-day running of the Government, controls the ministries, mayors, the Executive’s agenda. She is the dreaded chief of staff: no official dares to go against her will and those who have done so have been humiliatingly removed from their duties. Every day, at lunchtime, Murillo appears on television to dictate the Executive’s agenda: he talks about works under construction, participation of officials in international events, signing of agreements with multilateral organizations, welcomes new ambassadors, announces the arrival of donated vaccines against covid -whose mortality the regime denied-, and presents fumigation campaigns or official celebrations. She has developed her own discourse, in which her esoteric beliefs – she is a follower of Sai Baba – are mixed with Christian and revolutionary mysticism. “Thank God”, “God willing”, “first God”, is entrusted to a country so religious that it sees with contempt what is classified as manipulation by Murillo. But for her it is her homily, in which she expresses her own gospel. “It is a manipulation of religion to humiliate and dominate the people,” said Silvio Báez, a Nicaraguan bishop who is very critical of the regime.

Rosario Murillo Zambrana was born in Managua on June 22, 1951. She is the daughter of Zoilamérica Zambrana Sandino, said to be a close relative of Augusto Sandino — the Nicaraguan national hero—, and Teódulo Murillo, a conservative man from Chontales, a cattle-raising area of ​​the center of the country. He had three sisters. As a teenager, Murillo was sent by her parents – comfortable cotton farmers – to study in Switzerland. Those who know her say that they were basic studies of etiquette, of bourgeois manners, to prepare young girls for marriage. But from a young age she sympathized with the guerrillas who were fighting the dictatorship, she was imprisoned for a moment, she read revolutionary verses and slogans with poets on the steps of churches and universities. He wrote, hiding guerrillas in his home in Managua. In the earthquake that devastated the capital in 1972 (which left more than 10,000 dead), she lost a son, a fact that, according to sources who knew her at the time, traumatized her, for which she had to be treated psychologically. Those who knew her closely affirm that Murillo never got over that trauma.

Although Murillo had visited Daniel Ortega in prison, where he spent seven years under the dictatorship of Anastasio Somoza, they found themselves in exile in Costa Rica, where they began their relationship. It was as if they sealed a pact, say sources who knew the couple in those years. They became inseparable. With the triumph of the Sandinista revolution in 1979, his partner became a powerful commander and Murillo feared that their relationship would sour. This is how he confessed years later in an interview with EL PAÍS: “I was scared from the moment he was named a member of the Governing Board because I realized that my life was ending completely on a personal level, in terms of privacy, as for having normal relationships as a couple ”. But she took advantage of her new role as a companion to a powerful member of the government, later appointed president, to control the cultural world of revolutionary Nicaragua.

Murillo became director of the Sandinista Association of Cultural Workers, a powerful organization that brought together poets, painters, writers, and actors from the country. She was authoritarian and despotic, say those who treated her at the time. She resented some Sandinista figures, such as the poet Ernesto Cardenal and other writers, because she thought they did not give her the place she deserved as a poet. Then began a fierce campaign against the poet, then Minister of Culture, to undermine his authority and remove functions from the ministry.

“We made a protest that was crushed by appealing to militant discipline,” said the writer Gioconda Belli. Murillo did in the culture what he wanted. She was eccentric, rebellious, a headache for the fierce Sandinista apparatus. At the end of the eighties his relationship with Ortega was in low hours, to the point that he acknowledged in the interview with EL PAÍS: “I don’t want to be in the photo again next to Daniel Ortega, nor for journalists to ask me for interviews to get what Daniel Ortega thinks ”. In those years he wrote her a poem: I’m not looking for the man with high boots / his sad eyes scare me / where heliotropes no longer want to flourish / or magic. / I no longer look for you / I lost count of the days I had been following you / after maps and uniforms / without alphabet books for tenderness. / Everything is in its place, only that I / am no longer the girl in the portrait. / A woman who does not yet exist is about / to board a long-stopped train / she is carrying mirrors / and flowers.

The couple has nine children: Carlos Enrique, Daniel Edmundo, Juan Carlos, Camila, Luciana, Maurice, Rafael, Laureano and Zoilamérica. After the electoral defeat of 1990, when Violeta Chamorro won the presidency and ten years of a revolution devastated by a bloody civil war ended, the couple had to adapt to a complicated civil life, with Ortega becoming an eternal opposition candidate. “Our relationship is tense and difficult, in part because Daniel is a man dedicated to his work with a vocation as a priest,” said Murillo, then relegated to the background in Nicaraguan politics. They were hard years. There are those who say that the couple lived, in part, on aid given by old friends of the revolution such as Libyan Colonel Gaddafi.

Despite the distancing, Ortega continued to need Murillo, who became her savior in 1998. In May of that year, a political earthquake occurred: Zoilamérica Narváez, Murillo’s daughter, publicly accused her stepfather of rape, for abusing her since that I was a girl: “Daniel Ortega Saavedra raped me in 1982. It was in my room, lying on the carpet by himself, where he not only groped me, but with aggressive movements and sudden movements he hurt me, I felt a lot of pain and intense cold. I cried and felt nauseous. All that act was forced, I never wanted it, it was not to my liking or consent, ”Narváez wrote in the public complaint. After the scandal, Murillo came to the rescue of her husband and declared her daughter crazy, a liar, a treacherous. “It is the key moment for Rosario Murillo. He disqualifies, denies and sacrifices his daughter, declares her crazy, and thus renders a service to Ortega and becomes essential for Daniel, ”explained journalist and feminist Sofía Montenegro.

It is a moment of reconversion: Murillo takes the reins, transforms Ortega’s image, dresses him in white, makes an alliance with Cardinal Miguel Obando, once a fierce enemy, who marries them through the church. She became the opposition’s campaign manager, who returned to power in 2007 through pacts and political shenanigans in a country with weak institutions. “Daniel and Rosario,” now read the official slogans. Installed back in power, Ortega persecutes his critics, controls institutions and forges electoral fraud. At his side, Murillo controls the day-to-day running of the public administration. She becomes a kind of all-powerful prime minister, demanding higher quotas every day. The couple takes advantage of the enormous oil aid that Hugo Chávez gives to buy favors, develop a clientelist policy and enrich themselves. A new wealthy class is born: the Ortega oligarchy, with the family controlling all power. Murillo separates the key figures of Sandinismo who still gravitate around Ortega until she and only she became the essential commander. His peak moment comes in 2016, when he publicly declares her as the “eternally loyal” and later names her as his vice president, the official heir to power in Nicaragua.

That is why for Rosario Murillo the citizen insurrection of 2018 was a personal affront. The Nicaraguans put their aspirations in check, so the response was brutal to maintain power. This year Nicaragua must hold presidential elections, but Ortega has implemented reforms that give him absolute control of the Electoral Tribunal, has ordered the arrest of what could be his main opponent, Cristiana Chamorro and three other opposition candidates for the presidency, and develops a new political campaign to be reelected, along with Murillo, in November. If the president is absent, the Constitution establishes, his vice, the eternally loyal Rosario Murillo, will govern.