Ronaldo: We are in the “right place” 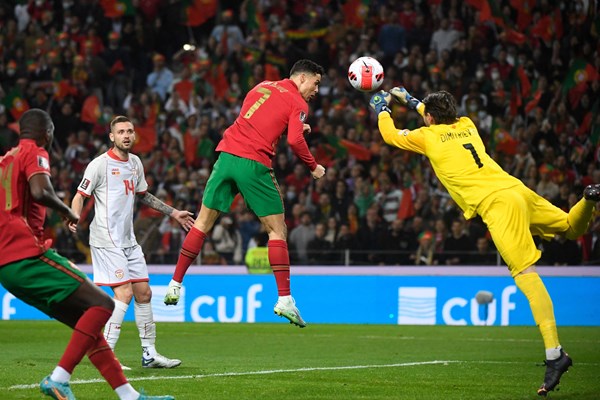 Berlin (DPA)
Portuguese star Cristiano Ronaldo said that his country has become “in the right place”, after he qualified for the 2022 World Cup in Qatar.
Bruno Fernandes scored a double that led Portugal to a 2-0 victory over North Macedonia in the European play-off final in Porto, Portugal.
The Portuguese national team, coached by Fernando Santos, avoided the absence of any version of the World Cup in the current century so far.
The Portuguese team had finished second behind Serbia in its European qualifying group, to be forced to enter the European play-off, but it accomplished the task and qualified for the finals, making the Italian team the only one of the European giants who will miss the World Cup in Qatar.
It is expected that Ronaldo, the Manchester United striker, will participate in the World Cup finals for the fifth time in his career, equaling the number of Antonio Carvajal, Rafael Marquez, Lothar Matthaus and Gianluigi Buffon, knowing that Buffon did not play in the 1998 edition but was included in the Italian national team squad.
Ronaldo said, through his account on the “Instagram” application, after yesterday’s match: “The goal was achieved. We are in the World Cup scheduled in Qatar. We are in the right place.”
He added: “Thank you to all the Portuguese for your continued support! Let Portugal advance.
Ronaldo contributed to the goal that Fernandes scored in the 32nd minute, then Sadiogo Jota in the second goal, which came in the 65th minute.
“It doesn’t matter at all,” Fernandez told reporters, regarding his performance in the match. The important thing is to help the team, I’m not here to score goals for myself.”
He added, “If I managed to score, I feel happy, and that’s what I did, and anyone has the right to criticize and express their opinion.” He continued, “But I stuck to focusing on the coach’s ideas, and perhaps what led me to score the double, is to implement what the coach asks of me.”

See also  Al-Jaber: The wise leadership has established an approach to investing in the energies of youth

To all cars: beware of the software | FormulaPassion.it