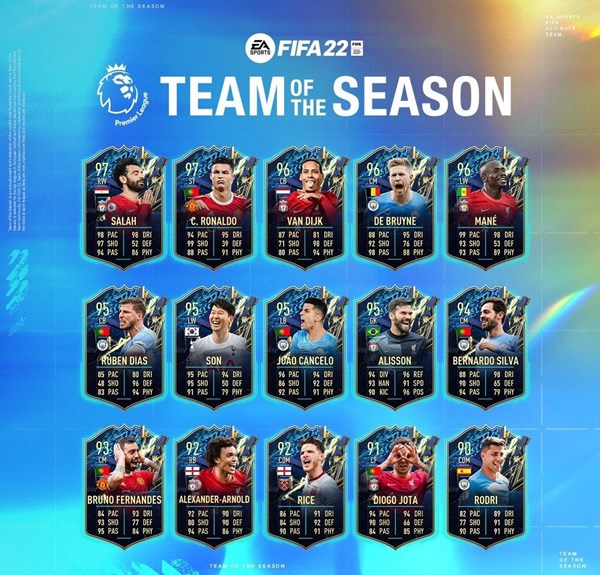 Dubai (Etihad)
The duo Cristiano Ronaldo and Mohamed Salah topped the perfect squad for the English Premier League this season (2021-2022), and EA Sports, which produced the game “FIFA 22”, one of the main sponsors of the Premier League, announced the perfect squad for the FIFA 22 edition, and Ronaldo, the Manchester United star, won And Salah, the Liverpool striker, had the highest card “97” among all players, to lead the attacking line, accompanied by Heung-Min Son of Tottenham Hotspur and Sadio Mane, the Liverpool striker.
The 15-man squad includes 6 players from Liverpool and 5 players from Manchester City, while the squad was devoid of the names of Chelsea players, who are in third place, while it included two from Manchester United, which fell to sixth place this season and is on the verge of failing to qualify for the Champions League. .
The perfect Premier League squad included: goalkeeper: Alisson Becker (Liverpool), in defense: Van Dijk, Alexander Arnold (Liverpool), Joao Cancelo and Robin Diaz (Manchester City), in the middle: Rodri, Bernardo Silva, De Bruyne (Manchester City), Bruno Fernandes “Man United” and Declan Rice “West Ham” and in attack: Sadio Mane, Jota, Salah “Liverpool”, Ronaldo “Man United” and Son “Tottenham”.

See also  Ryan's tragedy is repeated.. the death of a child stuck in a well in Afghanistan