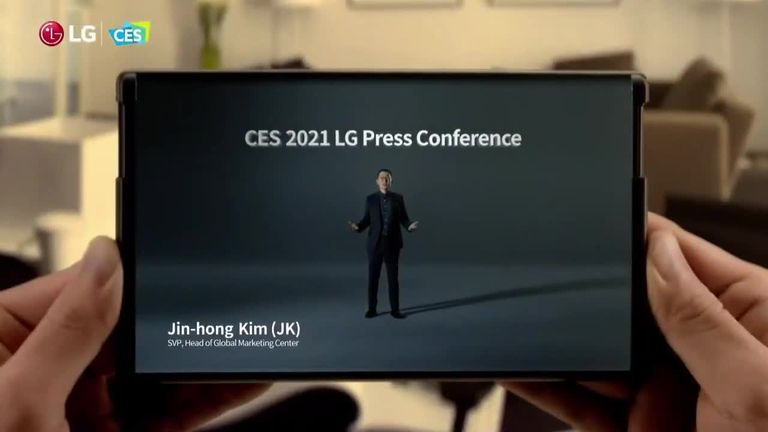 LG surprised us in 2020 with the LG Wing, a mobile with a probably unique design on the market. The terminal, which costs 1,099 euros, has a double rotating screen designed to use several applications at the same time. It was not the first time that the South Korean brand bet on multitasking. They’ve done it before with their dual-screen accessory smartphones. Now he comes back to the load with a phone that rolls up. The manufacturer took advantage of the first day of CES, the world’s largest consumer electronics fair, to briefly show a video of the LG Rollable.

In the video, you can see how a user holds the mobile with his hands in a horizontal position. Suddenly the screen of the device slowly pops up and starts to get bigger. It is, according to the company, the first images of its telephone project roll up. In this way, the user could have “a single screen of variable size”. Different leaks suggest that the LG Rollable would have a 6.8-inch screen that could be stretched to 7.4 inches. This large screen could be especially useful for consuming multimedia content or using different applications at the same time.

The LG Rollable would be the second smartphone inside of the Explorer project. This initiative is the new strategic line of mobile phones from the Korean brand that advocates for innovative and avant-garde devices to change the way of understanding technology. It is a way of exploring how the smartphones from the future. At the moment, LG has not offered information on when its first rollable phone will be available or how much it will cost. Everything indicates that this terminal will be presented in the first half of 2020, according to The Elec, a Korean medium specialized in the electronic components market.

The Korean brand already has experience with this type of screen. In 2018 he spoke for the first time about his new roll-up television. A year later, he showed CES attendees in Las Vegas this technology. The LG Signature OLED TV 65R9 has a flexible panel that can be folded out to become a 65-inch TV. But it can also be saved when users don’t want to see it. The company thus intends to prevent the television from taking up space in the living room when it is not being used.

There are other brands exploring similar concepts as well. In recent months, some videos of TCL rolling mobile prototypes had been leaked. The Chinese company has long been experimenting with screens that behave similar to a roll of paper. This year TCL has used the CES to show two proposals. On the one hand, a large rollable OLED screen of 17 inches and only 0.18 millimeters thick. On the other, a 6.7-inch AMOLED screen that can be stretched to 7.8 inches. This last concept is the most similar to the LG Rollable. Although, at the moment, TCL has not indicated that either of the two screens will be implemented in any commercial device.

Meanwhile Oppo is working on a roll-up mobile that allows users to adjust the screen size according to their needs. It is a phone with a 6.7-inch panel that when moved to the left it stretches and becomes a 7.4-inch. This terminal, called OPPO X 2021, at the moment is just a concept. That is, the company has not shown this phone to date.

One of the possible advantages of roll-up mobiles over folding ones would be that they would not have the fold that the latter present in the main panel. In terminals such as the Galaxy Z Fold 2 or the Z Flip, a small line is usually seen on the screen just where the terminal is bent. We will still have to wait to see if this type of rolling mobile can compete with the folding smartphones of companies such as Samsung, Huawei or Motorola that have already reached the market.

In Nesyri: “I’m staying at Sevilla, I’m not going anywhere”