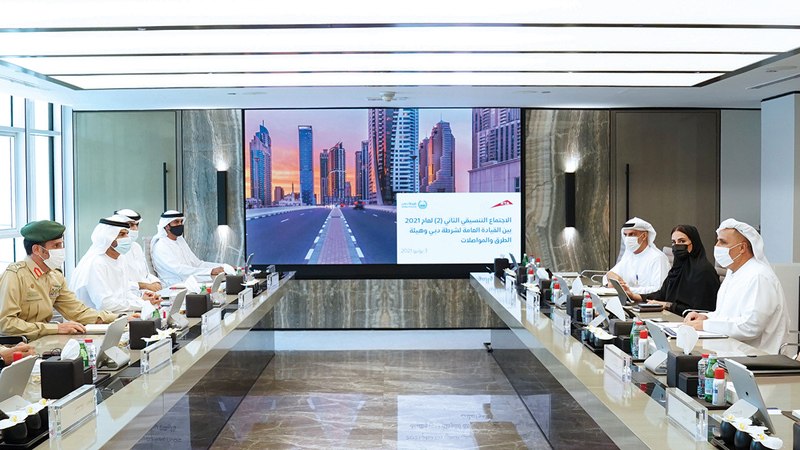 The Director-General and Chairman of the Board of Executive Directors of the Roads and Transport Authority in Dubai, Matar Muhammad Al Tayer, and the Commander-in-Chief of Dubai Police, Lieutenant-General Abdullah Khalifa Al Marri, held a coordination meeting to coordinate in joint work areas related to transportation security, traffic safety, and the achievement of strategic performance indicators and the objectives of the traffic safety strategy for the emirate Dubai for the years 2017-2021.

The meeting, which was held at the authority’s main building, discussed developments related to the proposed model for regulating the operation of electric scooters, the proposal to regulate the work of motorized bikes (Mobid), and the authority’s plan to implement lighting work in Dubai regions during the period from 2022 to 2025.

The meeting also discussed the results of the trial operation of the “electric scooter”, which began in October of 2020, where there are currently 800 scooters, distributed over five vital areas: Mohammed bin Rashid Boulevard, Jumeirah Lakes, Dubai Internet City, Al-Raqqa and Al Muraqqabat, and Al-Thani Street. From December (within a specific route and range), the experience proved the success of the “electric scooter” in being a convenient means of individual transportation for short trips and trips of the first and last miles.

The percentage of customers’ satisfaction with the experience was 82%.

The attendees reviewed the procedures for preparing for the permanent operation phase at the emirate level after the end of the trial run phase, choosing the most appropriate model for the Emirate of Dubai, and benefiting from the trial operation phase and from the experiences of major cities in this field, where many benchmarks were made in the operation of the “electric scooter”, with A number of international cities such as London, Paris, New York, Berlin and Singapore, where these comparisons showed the varying cities in their goals of operating the “electric scooter”, such as easing congestion, or providing new means of transportation, and the meeting reviewed the infrastructure readiness, the level of awareness and the culture of society. towards this method.

He also discussed the most important elements of organizing the work of the “common and personal electric scooter” during the next phase, focusing on four main axes: the user, the electric scooter, the road and the commercial model with the operating companies, in addition to discussing the proposed areas for trial operation in October 2021.

The two sides also discussed a proposal to regulate the work of motorized bikes (Mobd), which are bicycles with two or three wheels, which operate with an engine at a design speed of not more than 50 kilometers per hour, and differ from motorcycles in terms of engine power and speed.

Global cities have begun to license it as a first and last mile transportation option, but with specific conditions, and in certain areas that ensure the safety of passengers and road users.

The two sides reviewed the standard comparisons related to the requirements and controls for its use in some developed countries such as America, Spain, Italy and France, and the proposed model for regulating the work of the “mobd” in Dubai, which covers the age of the user, the roads allowed to drive, the maximum power of the engine, registration and licensing, and speed. maximum, and other criteria.

4 axes to regulate the work of the electric scooter: the user, the scooter device, the route, the business model with the operators.