Rio’s Christ the Redeemer statue has competition: a 43-meter Jesus in Encantado, Brazil 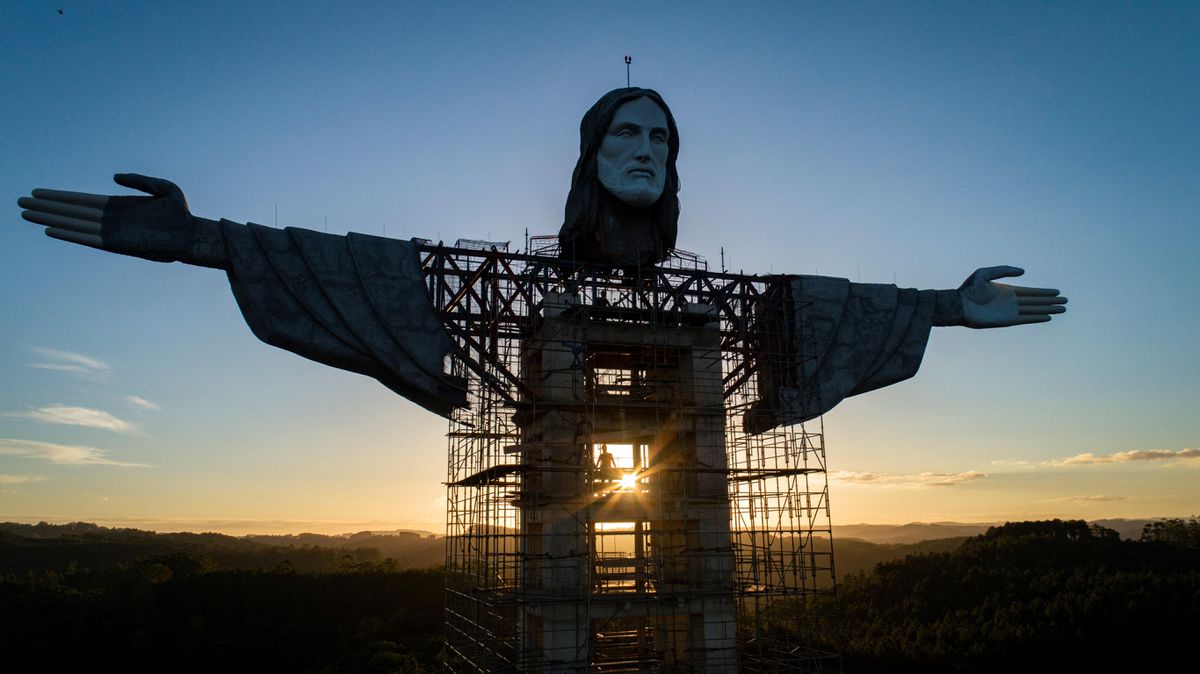 As it approaches its 90th birthday, Rio de Janeiro’s world-famous Christ the Redeemer faces some competition. The challenger is also Brazilian and even bigger, having a height advantage of five meters on the statue that has for decades been the best-known postcard image in the country. The newcomer will stand 43 meters tall, including its pedestal, and is under construction on a hillside in the small southern town of Encantado. Baptized “Christ the Protector,” it will be the world’s third-tallest statue of Jesus when it is completed.

The announcement that the arms have been fitted to the statue, upon which the head has already been installed, came to international attention a few days ago and caused a tiff between the mayor of one of the most beautiful cities in the world and his counterpart in an unknown town of 23,000 inhabitants in the interior of Brazil’s southern state of Rio Grande do Sul that is seeking to up its tourism game. The exchange was cordial enough, though.

Eduardo Paes, Rio’s mayor, made an ironic reference to the Christ the Protector statue in a tweet: “Building an even higher statue is a piece of cake! I want to see that view, ”he wrote next to a breathtaking image of Christ the Redeemer with his arms outstretched, as if embracing Rio and the spectacular Guanabara Bay beyond.

Until the coronavirus pandemic prevented thousands of tourists from making the trip up the Corcovado to visit the art deco monument, from there they would strain their eyes to make out Copacabana beach to the right of the statue and the Maracaná stadium to the left.

Paes’ counterpart, the major of Enchanted, in the face of the evidence, was forced to humbly concedes: “No argument. Rio de Janeiro is still beautiful and everybody in the world already knows it. Now let them come to discover Christ the Protector of Encantado, our culture and our gastronomy, ”Jonas Calvi wrote on Instagram.

A done deal, replied Paes, who in the spirit of brotherhood in a country containing the largest number of Catholics in the world, promised to attend the inauguration of Christ the Protector scheduled for later this year.

The construction of the new statue began two years ago. It will measure 43 meters in height and its arms extend for 36 meters. An internal elevator will carry tourists to a viewing platform with a sweeping panorama of the surrounding valleys. Encantado, near the state capital of Porto Alegre, was founded a little over a century ago by Italian immigrants.

Christ the Protector was the brainchild of the former mayor of Encantado, Adroaldo Conzatti, who died of Covid-19 in March, following up on the initial suggestion of a parish priest. Local businessmen embraced the idea and the statue is being funded by donations, without a single real of public money, Calvi has stressed. According to France Presse, the overall budget for the construction is two million reals ($ 350,000).

Rio’s Christ the Redeemer was inaugurated in October 1921 and is a UNESCO World Heritage Site and one of the new Seven Wonders of the World. Ascending the Corcovado, clouds permitting, to take photographs of Rio below is one of the most popular tourist attractions in a city that beneath such a beautiful surface still has serious problems with corruption (all of Rio de Janeiro State’s previous governors have been jailed or are under investigation), police brutality, inequality and, today, hospitals saturated with Covid-19 patients.

The drought that seizes Mexico, a predictable and devastating tragedy