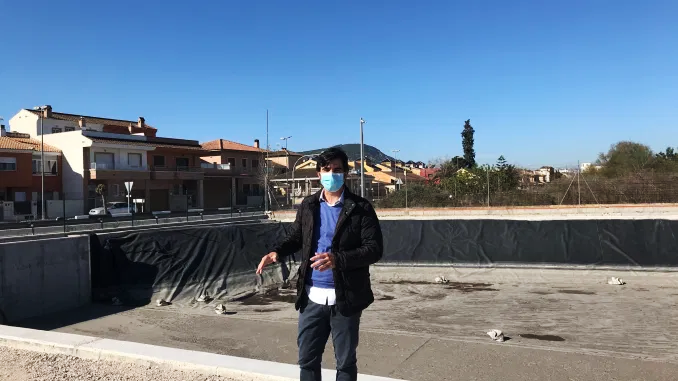 A STORM tank has been installed in Bigastro that can collect 200,000 liters of rainwater and provide the town free water for irrigation or washing.

The raft system only cost 120,000 euros, and is situated on Calle Tomás Villanueva, in front the Health Center.

Bigastro’s Councilor for Urbanism, Antonio Meseguer, announced the completion of the work, and explained that local people requiring any of the water simply have to make a request to the town hall.

Meseguer mentioned that this project shows a continued support for “circular economy cycles as well as environmental ones with the use of rainwater.”

He explained that if any of the water is not drawn after 10 days, it will be routed into the Alquibla ditch to prevent any formation of mosquito larvae, in addition to irrigating nearby plantations.

On behalf of Bigastro City Council, he thanked the farming community for the prior authorizations discharging the water, which made it possible for the project to become a reality.

How do storm tanks work?

They are huge underground tanks designed to store the first rush of rainwater, often more polluting than sewage because it carries away all the dirt accumulated on streets and pavements.

On days of heavy rainfall, water runs down through the drains, but due to the huge volume it cannot be purified immediately, so these waters are held in the storm tanks until the rain stops.

That’s when it’s gradually fed into the purification plants, preventing the pollution of rivers and flooding of low lands, such as the Vega Baja.

But before rainwater even reaches the tanks, it passes through a series of filters that catch solids like plastic bottles and other detritus.

The UAE sends urgent food and medical aid to those affected by the explosion in Bata, Equatorial Guinea