Return 3 turtles to the sea after rehabilitation 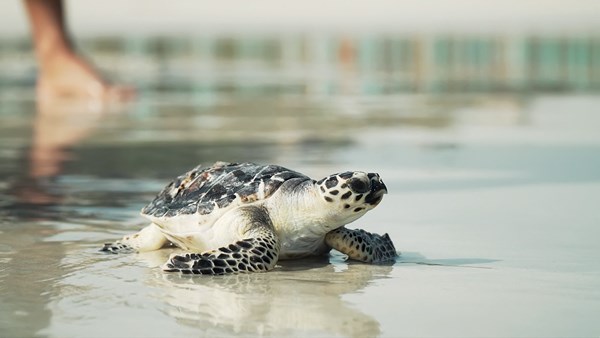 Three endangered hawksbill turtles have been brought back to sea after being rescued by EGA’s sustainability teams from the company’s Tawila beach, after receiving specialized care at the Dubai Turtle Rehabilitation Project of Burj Al Arab Jumeirah Dubai.”
Emirates Global Aluminium monitors the turtles nesting on Al Taweelah Beach every year, in order to protect their nests and pick up injured or sick turtles and transfer them to the center designated for receiving care. The three turtles were among a group of 30 turtles that were returned to the sea after receiving the necessary care at the “Dubai Turtle Rehabilitation Project”, which is making great efforts to support these wonderful creatures and curb the decline in their numbers. The project has provided the necessary care for about 2,000 sick or injured sea turtles since its establishment in 2004 in the Burj Al Arab Jumeirah, in cooperation with the Dubai Wildlife Conservation Office; the Dubai Falcon Hospital; and the Central Laboratory for Veterinary Research.
Hawksbill turtles and green turtles are among the most prominent turtle species that the project is keen to take care of, while the Dubai Turtle Rehabilitation Project also provides care for loggerhead turtles and sometimes olive ridley turtles. Since 2011, about 100 hawksbill turtles have laid their eggs on the beach of the EGA site in Al Taweelah, which led to the hatching of about 7,000 baby turtles during that period. More than 630 kilograms of waste washed ashore this year was removed to the beach in order to protect the nesting sites.