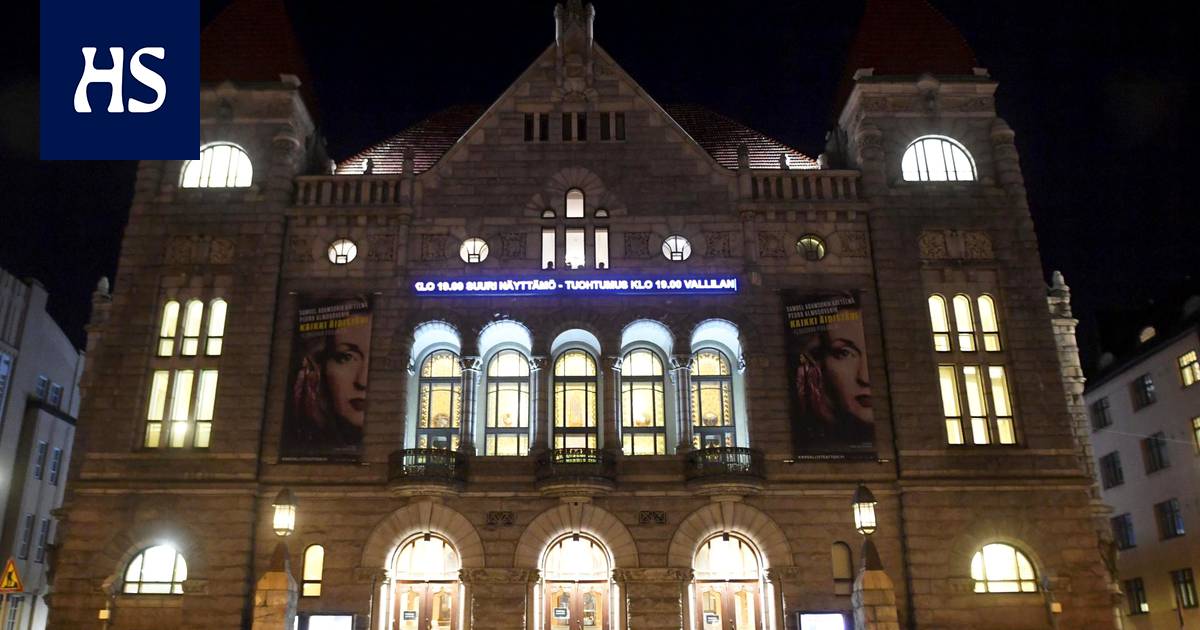 “The only positive thing here is that when tickets have been sold a little, the number of exchanges is not so large,” says Mika Myllyaho, the director of the National Theater.

Authorities have outlined that the maximum number of indoor public events in the metropolitan area should be limited to 20 people starting next Monday for three weeks. The final decision in the matter is made by the Regional State Administrative Agency of Southern Finland.

The policy has a strong impact on cultural events.

Next week, the National Theater would have had three premieres: Vesa Vierikon interpretation Molièren From the site, Juha Jokelan Docent, and a group of theater youth Anne F or Satu Linnapuomin adaptation From Anne Frank’s diary.

“Everything is being canceled, the boutique is closed,” the Director General of the National Theater Mika Myllyaho says. “Then let’s see in peace where the premieres are worth investing, but for at least three weeks they will now move on.”

With these prospects, the aim is to exchange the tickets already acquired for future performances. Admittedly, the corona situation has made it simpler than before.

“The only positive thing here is that when tickets have been sold a little anyway, the number of exchanges isn’t that big either,” Myllyaho says.

The cancellation of performances at the Helsinki City Theater for the next three weeks means that the new one will also be performed Tatu and Patu in Helsinki The premiere of the music play is postponed. The theater will announce a new premiere later.

Of the orchestras, the Helsinki City Orchestra has decided to cancel all its concerts for a period of three weeks

The concerts to be canceled are the concerts on Wednesday 25 November and Thursday 26 November (conducted by John Storgårds and as a piano soloist Kirill Gerstein) and the concerts and events of Finnish Music Day on 8 December.

A decision on possible meeting restrictions for the concert scheduled for Friday, December 18 has not yet been made.

In the Radio Symphony Orchestra it remains to be seen what the restrictions mean to them.

For the time being, it is still open whether the performers will be included in 20 people, says RSO curator Tuula Sarotie. So the audience can hardly be taken, but can even all the callers be on stage?

“We’re ready to continue as an orchestra sitting on safety gaps as we currently are, or we can still reduce it to chamber music ensembles,” Sarotie says.

“In any case, the live broadcasts will be on Yle’s channels, but the size of the orchestra performing will depend on the interpretation of the new rules.”

At the National Opera and in the ballet, the performance will cease for the public for three weeks from next Monday.

Franz Lehárin Happy widow will have its premiere today, Friday, which will be carried out by security measures. Saturday’s performances will also be held.

“For us, the guidance is clear. It is easy to act as required by the authority, ”the communications director Liisa Riekki says.

Although the coronavirus has not been found to have spread during security screenings, Riekki understands the authorities’ decision.

“It’s hard for authorities to define different guidelines for different performing arts groups. The message must now be unambiguous. ”

However, the suspension of the opera house program due to the disease situation is again a big disappointment, Riekki adds.

So far, no decisions have been made on a training ban, but the matter will be considered over the weekend.

In the spring, the National Opera and Ballet quickly organized virtual performances to replace the performances. According to Rieki, the same is being considered for this period as well.

Rock clubs Tavastia had not yet had time to digest the matter thoroughly before noon on Friday.

“Good question, now it has to be interpreted,” he replies Juhani Merimaa, which is just launching a Zoom conversation on the subject.

“This is a bit like Catechism. There will be rules and they must be interpreted. ”

Merimaa says it is still a little unclear to them whether the 20-person limit for public events in Tavastia or the guidelines for restaurants, which had not yet been consulted at this stage, apply.

“From the authority’s point of view, the opportunity to which admission tickets are sold is probably an audience event. If you think about the risk of a corona infection, ticket sales are probably not essential. ”

However, preparations are now being made for cancellations and phones are ringing.

Until now, concerts have been held at Tavastia with 250 listeners. The three-week period falls among other things Maija Vilkkumaan five acoustic concerts. They were originally planned for spring, from where they were carried over to August and even December. Now the transfer is ahead again.

Judge Nurmio’s 70th anniversary in Tavastia is now in danger of being canceled.­Picture: Akseli Valmunen / HS

Tomorrow, Saturday, Tavastia will have Judge Nurmion 70th anniversary. They, too, are now at stake.

“Every time there is a ticket exchange, it becomes a cost. This goes to the joke side. Soon the whole cash will go to the transfer costs, ”says Merimaa.

House of Culture events for the next three weeks will be postponed or canceled altogether. For example, the Monday gig of the Danish band Mew will be postponed to next year. American singer Art Garfunkelin the gig is canceled. The principles of returning tickets depend on the organizers. Tickets purchased for postponed concerts will work as is later.

Executive Director Sami Hokkanen according to the phone has been hot since the restrictions were announced.

“Let’s find out if there are conditions to postpone the concerts to December, because it may be that the event bans will continue,” Hokkanen says, adding: “This could have been a death blow to this year’s events.”

In the autumn, the Culture House has had a dozen concerts.

“We are really grateful that they have been able to organize them safely and the customers who have been there have behaved really well. We have received a lot of positive feedback and people have been happy to have gotten to the concerts again. ”

The customer capacity of Kulttuuritalo has been halved. The hall has a seating area, so the safety distances have been easily arranged. The performances have also required the wearing of masks.

“Without blaming anyone, it has to be said that the situation is contradictory. To our knowledge, no infections were acquired during the autumn. But still we now have bread taken out of our mouths for the rest of the year. We are in a really tight place right now, ”says Hokkanen.

For employees, the situation leads to layoffs. The restrictions now imposed also affect the conference activities of the Culture House.

Events have been postponed from spring to autumn and now from autumn to next year. According to Hokkanen, it will be difficult to find vacancies for next year.

“Next year is going to be really eventful.”

Cinema activities The rotating Finnkino will continue to operate from Monday. Sales Director Hannele Wolf-Mannilan however, the size of the audience is then limited to 20 people per hall.

“Now we’re going through the situation from hall to hall. If it so happens that tickets for some shows have been purchased for more than the allowed 20 people, then we are in contact with the customer, ”says Wolf-Mannila.

“Certainly this will make the financial situation even more challenging. It is hoped that it will only be a matter of three weeks and that the corona situation in the metropolitan area will be brought under control. ”

Cinema Cinamon Theater Manager Mikko Miettinen is sad about the new restrictions caused by the epidemic, but says they did not come as a surprise. The company also has cinemas in Latvia and Lithuania, where cinemas have been completely closed in the last two weeks.

Due to the small number of audiences, the cinema hall in the Tripla shopping center in Cinamon was closed as early as Wednesday.

“The new restrictions do not affect us badly in the sense that rarely have there been more than 20 spectators in our shows recently,” says Miettinen. The Red Cinema has 100 seats, half of which have been in use so far, and since next Monday there are only twenty.

Miettinen believes that the low number of visitors to theaters is affected by a phenomenon that plagues the whole industry: when studios postpone making films, distributors postpone premieres and theaters have nothing to present.

“In this situation, the hat must be raised for Finnish filmmakers. Tove and Risto Räppääjä they have done really well and they have been able to breathe artificially in the field, ”says Miettinen.

There are in Helsinki also running or launching some cultural events that will inevitably be hit by restrictions.

And hit right now, before Monday.

The events of the city festival Art goes Kapaka, which started on Wednesday, from Friday and Saturday will be postponed to a later date, says Mikko Leisti, the founder of the event.

“After reflection with restaurants and partners, this has come to an end. Let’s see a new time when the situation is better. ”

According to Leist, a dozen events will be canceled on Fridays and Saturdays. They will be tried later.

The festival, which was postponed from August to November, had time to offer music, art and discussions on Wednesday and Thursday. This has provoked some debate, but everything has been done in accordance with the regulations.

“Everything has been done according to regulations and instructions, and there have been no more people in the restaurants than there are anyway these days.”

The jazz festival We Jazz will also be canceled this year. The festival was scheduled to run from November 29th.

“With a heavy mind, we bury us a beloved event that we have been preparing for over a year. We would have liked to offer our audience light and power from topical jazz music this year as well and we had carefully prepared a safe event for this exceptional time. However, the situation is challenging and health naturally goes ahead, ”says the executive director of the We Jazz Festival. Katariina Uusitupa in the event bulletin. 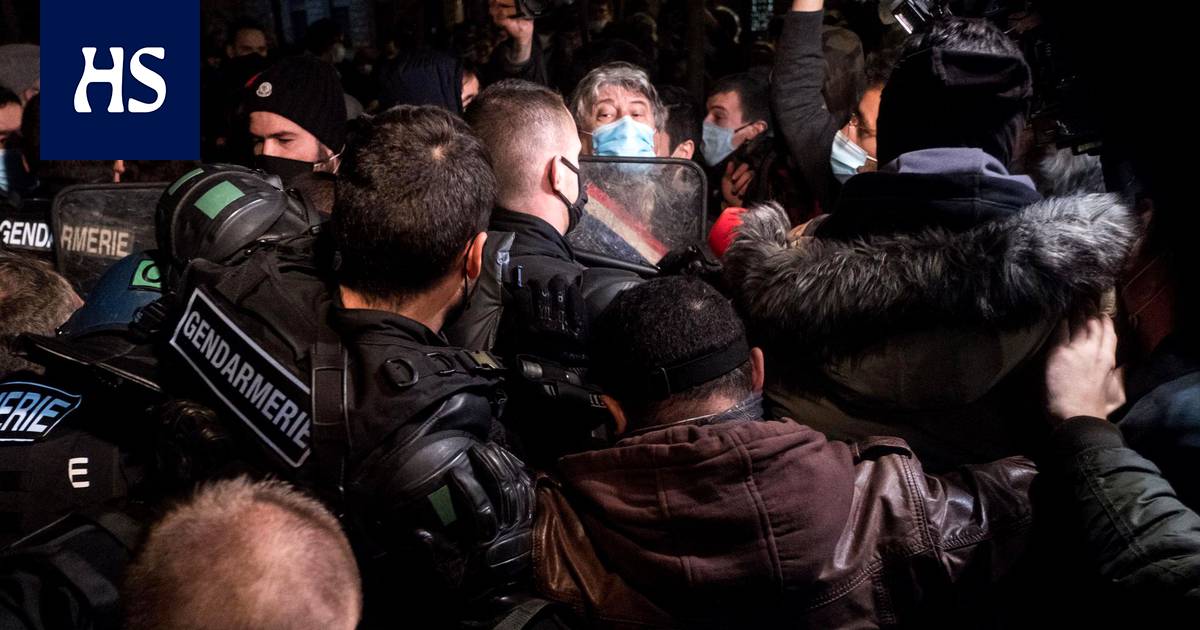 Pharmacies E-commerce company Amazon opened an online pharmacy in the United States, the value of pharmacy shares began to decline