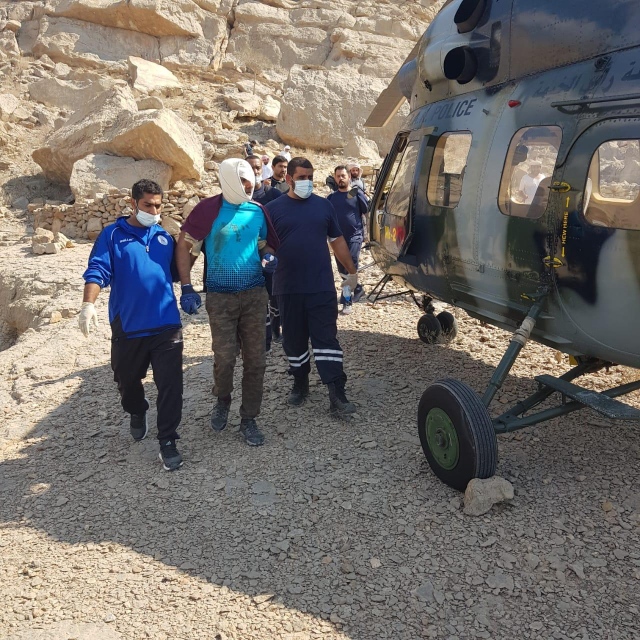 The northern regions recorded a remarkable increase in the number of tourists and people stranded in the mountains and valleys, as the number of people stranded since the beginning of last year until the day before yesterday, 46 people, while the eastern region recorded four cases in the first quarter of this year, as a result of their exit alone in groups It is not specialized in mountain tourism, which leads to them losing the road and entering rugged valleys and mountains that are difficult to reach, or locating them via helicopters, which leads to the difficulty of finding them in time, as Ras Al Khaimah Police uses the people of mountainous areas to find those stranded there. In addition, she used an Air Wing Department plane to search for them and take them to safety.

And «Emirates Today» monitored that amateur mountain climbers or mountain walks in valleys and mountainous areas go out in groups of up to eight people, without having a tour guide or a specialist in mountain walking, and they do not inform the competent authorities of their destination, or provide them with sufficient Water and food, in addition to climbing high mountainous areas late at night.

The Director of the Civil Defense Department in Ras Al Khaimah, Brigadier General Muhammad Abdullah Al Zaabi, stated that the mountain accidents that are increasing in recent times came as a result of the increasing demand by tourists and some citizens and residents of rugged areas to practice their hobbies and mountain activities, which has become a strong challenge for all concerned parties in dealing with these The quality of the accidents.

He added that during the next week, an expanded meeting will be held that includes the General Command of Ras Al Khaimah Police, the Civil Defense Department, the Tourism Development Authority, the Public Services Department, the National Ambulance in addition to the Ras Al Khaimah Municipality Department to discuss ideas and proposals that contribute to reducing the recurrence of mountain accidents. To ensure the optimal provision of assistance when receiving reports of incidents that represent a real threat to the safety of the apostates and drain the time and effort of search, ambulance and rescue teams and expose them to danger.

The head of the Air Wing Department of Ras Al Khaimah Police, Colonel Pilot Saeed Al Yamahi, indicated that members of the public should, when practicing hobbies and other sporting activities, avoid hiking in rugged areas high in the mountains, peaks of heights, and other areas that may pose a threat to life The human being, due to its rugged terrain and the difficulty of accessing it.

In the Emirate of Fujairah, search and rescue teams, in cooperation with Fujairah Police and Fujairah Civil Defense, recorded the rescue of four people stranded in the mountains of the eastern region during the first quarter of this year.

The Director of the Civil Defense Department in Fujairah, Brigadier General Ali Obaid Al-Tunaiji, confirmed that the wrong behavior and the lack of knowledge in the mountainous areas are what increase the size and exacerbation of the problem of loss or fatigue, and pointed out that there are wrong actions taken by many people who go out to open areas such as the desert or mountains It is represented in not overloading with water and food and not carrying navigation devices such as (Thuraya), as well as not inspecting the vehicle before leaving, and making sure that there is sufficient fuel or not taking spare fuel.

He explained that some people are planning mountain trips without informing their relatives of their place of departure, when and how much time they will spend, noting the danger of going to open places alone without an escort.

He stressed that it is necessary to carry a backpack in which there is enough water and some dry food that is sufficient for at least two days in anticipation of any emergency, as well as carrying headlamps and spare batteries, in addition to carrying a mobile charger for phones and making sure that the phone works while going out to mountainous areas and in the event that the transmission is interrupted. The emergency calling feature can be used in emergency situations.

The Fujairah Adventure Center revealed the completion of the construction phase, which included mountain biking paths and paths for hiking, in addition to mountain bike skills training sites that apply the highest international standards. The first phase also included the allocation of a children’s area designed for training in various adventure activities.

The director of the Fujairah Adventure Center, Saeed Khamis Al-Maamari, confirmed that the center is working on preparing an infrastructure for the implementation of adventure activities in the Emirate of Fujairah, which serves and meets all the needs of adventure seekers in the emirate according to future plans. , In the Emirate, in order to protect families and individuals from losing their way back and accidents.

Al-Maamari stated that the mountains of the Emirate of Fujairah received wide attention for skiing and land cycling enthusiasts, which prompted the center to pave 23 mountain paths for the safety of its users in various areas of Fujairah, with a distance of 91 kilometers, represented by the paths of Al-Taybeh, Wadi Al-Abadla Mountain, Al-Aqah, and the Al-Sharriyah area in Al-Twain. , The Bidiyah Mosque, the Seven Summits, the Three Peaks and the Gouna, the Wadi Sahem Valley, the Round Cave, and others.

While the head of the Municipal Council of Khorfakkan, Dr. Rashid Al-Naqbi, indicated that the municipality of Khorfakkan, in cooperation with his administration and other competent authorities, worked hard to restore clear mountain paths and pave their rugged roads, such as the Al-Rabi and Aggression Tower, and the Khorfakkan Fort. The project of Al-Maqsar Tower and the paving of the mountain path in the region are also underway. Wadi However, there are amateurs with a high sense of adventure who exit these paths, causing their loss and sometimes their downfall, noting that it becomes in the hands of other competent bodies to search for them and rescue them.

Columns The coronavirus epidemic does not end abruptly, but the holidays reveal when life returns to normal

Amazon’s Lord of the Rings game would have been canceled