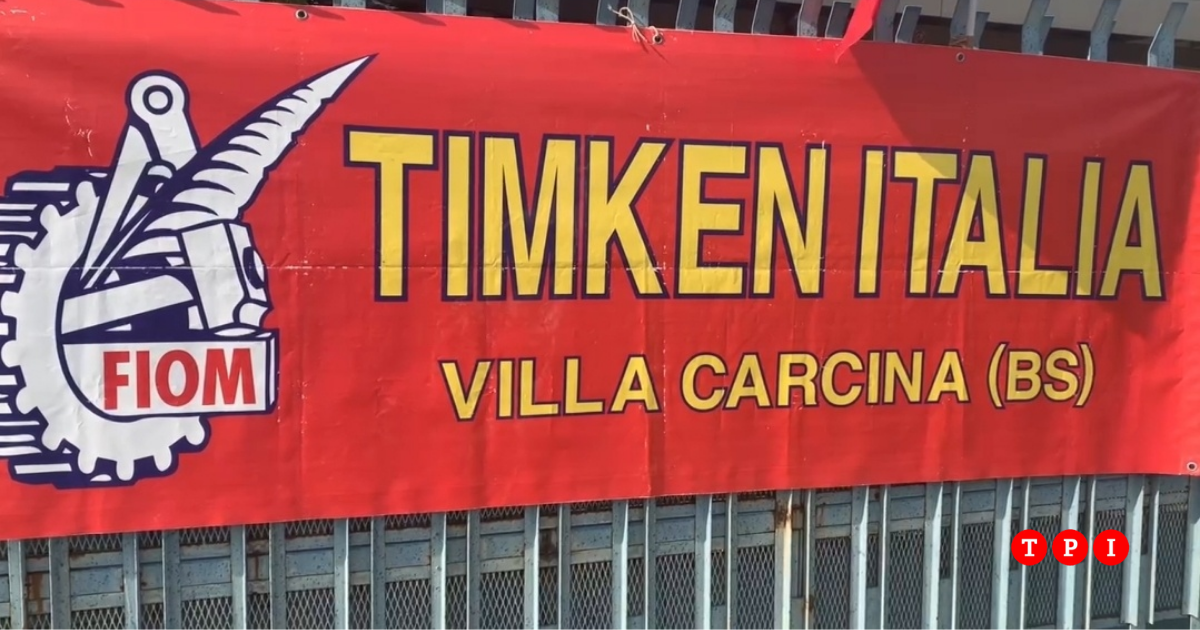 The bleeding of places continues work in Italy after release of layoffs wanted by the Government led by Mario Draghi: also there Timken Company, a US multinational active in the production of components for the automotive sector, has decided to close its plant in Villa Carcina, in the province of Brescia, with the consequent dismissal of 106 workers, which since Monday 19 July are in strike is permanent garrison.

The news follows the closing of the Rotork Gears of Cusago, to Milan; of the Gianetti Wheels, in Brianza; and of Gkn of Campi Bisenzio, to Florence; which has already led to the start of the dismissal procedures – in the last two cases with an e-mail notice – for a total of about 600 workers.

The latest case sparked a further reaction of the labor unions who remembered the pact signed between the Government and the social partners after the executive decision to eliminate the blocking of layoffs which, to tell the truth, was resolved in a joint document in which it was limited to “a commitment to recommend the use of social safety nets as an alternative to the termination of employment relationships “.

Now Fiom-Cgil, Fim-Cisl is UilM they ask “the Government to intervene at the Confindustria for block layoffs, comply with the common notice on the use of social safety nets signed with CGIL, Cisl and Uil, to provide solutions to open crises, to open discussion tables with the union in the main industrial sectors, starting with the automotive, steel and household appliances sectors “.

Meanwhile, even after the closure of the plant Timken, a company based in North Canton, Ohio, and present in 30 countries with over 50 plants, 24 distribution centers, 85 branches, 17,000 employees and a turnover (in 2020) of 3.5 billion dollars, workers suspect hides a speculative transaction.

The reaction of Fiom

“After Gianetti Wheels, in Brianza, and the Gkn of Campi Bisenzio, we are witnessing the umpteenth aggression at work and al industrial and social fabric of a territory of one multinational, who prefers the dismissal to the use of social safety nets”, One reads Note signed by Simone Marinelli, national automotive coordinator of the Fiom, and from Antonio Ghirardi, general secretary of the union a Brescia.

“There Fiom asked the Ministry of the Economic development (Mise) to convene the company and local institutions to deal with yet another dispute and avoid i layoffs“, Continues the press release. “It is also urgent to restart the automotive sector table to tackle the transition phase and identify, with an agreement between the social partners, the competent ministries and companies, the investments and tools for the protection of employment and industry in our country and prevent environmental, technological and organizational changes from affecting workers and workers “.

The reference is to the renovation in an ecological sense of allEuropean car industry. In fact, the risk is that the “green revolution” necessary for the environment will turn into a huge social cost for the workers of the continent, where – directly or indirectly – the automotive sector ensures employment for hundreds of thousands, if not to millions, of people.

The announcement of the definitive closure of the Timken to Villa Carcina it was a real cold shower for the 106 workers who are gathered in permanent garrison at the plant. “This is not the case, the government must intervene because at this rate there is a risk of social chaos,” he said Everyday occurrence the worker Walter Zubani, who has worked for over 30 years for the company in the province of Brescia, where rolling bearings, alloy steels and other components were produced until last week.

The suspicion among the workers is that the choice of the company is linked to relocation. “They squeezed the plant engineering without making investments to get to this point”, added Zubani, recalling how a few years ago the American multinational opened in Romania a plant similar to the Brescia plant.

Not only that: some workers believe that the timing of the closure of the Timken they are not unrelated to the choices of the Government in matters of employment. “All this rush to close,” according to a worker named Susi interviewed by Done, could be “linked precisely to the fear that the rules will change and limitations will return” to layoffs.

Meanwhile, for July 23, Fiom-Cgil, Fim-Cisl is UilM they called 4 hours of strike in all metalworking companies to: “say no to layoffs; reform the social safety nets and defend employment; giving concrete and positive solutions to open corporate crises; link the investments of the National Recovery and Resilience Plan to stable employment and work in health and safety; and prevent multinationals and investment funds from speculating and destroying industry and jobs “

The promises of the Mise

The multinational, according to the Fiom, has not yet released “any comment” and has not opened for any negotiations. Meanwhile, the government also promises attention to the case of Villa Carcina. “I am aware that the 106 workers (of Timken – ed) are in permanent garrison”, declared the Deputy Minister for Economic Development, Alessandra Todde, of the 5 Star Movement. “Precisely for this reason, in a very short time, I will initiate discussions with the Region, the company and the trade unions to concretely discuss how to proceed: after this step, we will evaluate with all the parties the convening of the table at the Put“.

The negotiation would add to the many crisis tables already open. Tomorrow, for example, a meeting is set to avert the dismissals decided by Gianetti. The representatives of Gkn, waiting to contact the top management of the company after a first meeting which ended in a stalemate.

“Funds and multinationals cannot be allowed to undo the industrial system of this country”, denounced the general secretary of the Fiom, Francesca Re David. “The government was wrong a unlock layoffs without having fielded adequate industrial policies, constraints for business and one reform of social safety nets able to face the transition “.