Life continues the same in the Regional Assembly at the beginning of the political course. The parties that support the Government of Fernando López Miras and those of the opposition showed again this Wednesday in Cartagena their
wide differences on the measures to be put in place both in the short and medium term to solve the
environmental problem of the Mar MenorBut they did not reach any agreement or lay the foundations for it in the plenary session called for the Minister of Water, Agriculture, Livestock, Fisheries and Environment, Antonio Luengo, to speak about the situation of the lagoon. The session was reduced to a
story clash already well known. All this, a week after López Miras and the Minister for Ecological Transition, Teresa Ribera, reached an agreement to work together to solve this problem.

There were no announcements or progress in the intervention with which Luengo opened the new session in the regional Parliament. He limited himself to reviewing what has happened in recent weeks in the salty lagoon, the efforts of the regional government to face this environmental problem and download the
foreseeable reproaches to the central government for its lack of collaboration. Among the data that he offered, many of them also already known, he highlighted the removal of 15 tons of dead fish and organic matter on the shore of the lagoon during the episode of anoxia two weeks ago on the southern shore. He also cited, among the measures to solve the problem, the modification of the lagoon protection law to prevent the entry of discharges and the new decree to prohibit the use of nitrogen fertilizers in the fields closest to the water. 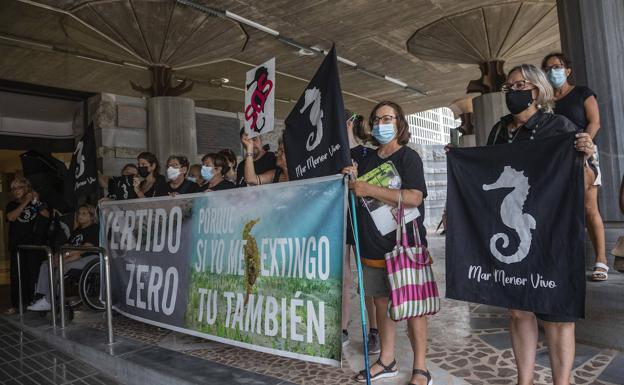 Protest concentration in the Regional Assembly during the debate on the Mar Menor, this Wednesday. /

“The diagnosis is clear, how clear the solutions are,” simplified Luengo, who asked the opposition not to ignore the four regulatory frameworks with regulatory and “restrictive” measures promoted by the regional government in recent years to make it compatible with the environment. environment the economic and social development provided by agriculture in the basin. According to the counselor, the Community laid the foundations, legislated, regulated the sectors involved, monitored the lagoon and made progress in environmental protection.
He did not miss the opportunity to criticize Minister Ribera for coming with “promises and announcements” that have not materialized. He stressed that there are corrective measures blocked by his Ministry, such as oxygenation tests and the rehabilitation of the Marchamalo salt flats. “We are very worried because we need you to help us (he told the opposition), to work and to put the recovery measures in place. We need to speak positively, ”said the counselor, however. Both the counselor and the spokesman of the Popular Group, Joaquín Segado, demanded the implementation of the measures of the Zero Dumping Plan, now ruled out by the central government after two years of waiting.

Luengo had a dry and hard aftershock at times
socialist Diego Conesa, who accused the popular of “not being ashamed.” The opposition leader denounced that the situation in the Mar Menor is a direct consequence of the policies of the PP, which repealed the old law passed when his party ruled in the Region and “for years ignored the warnings of the scientific community of excessive eutrophication nitrates’.
The green soup was a “clear warning that the Mar Menor was dying” Despite this, the regional government took a year to carry out a decree law that had to be corrected in the Assembly, he said.

Conesa also accused López Miras of lying about the measures implemented in the lagoon and cited as evidence the latest episode of fish mortality in the last two weeks, which the socialist leader described as “ecocide.” He also insisted that the powers to act in the lagoon belong to the Community, for which he asked
that attention is not diverted by demanding the intervention of the Ministry . In reply to the legislative initiatives advanced in recent days by the López Miras cabinet, the socialist spokesman announced the presentation of a bill to modify article 34 of the Mar Menor law in order to
toughen the fight against illegal irrigation. “We are in time to save the Mar Menor.” But for this he asked a regional government that is willing to take “drastic measures” based, he said, on compliance with the law and the immediate cessation of illegal irrigation, with more inspectors and the collaboration of companies, among other measures. He also criticized that in “his flight forward” López Miras asks for more powers, when the Community has not applied theirs in the last 26 years, allowing “environmental criminals” and “water thieves” to act, he said.

Regarding the pulse between administrations on powers to act in the Mar Menor, the spokesman for the Parliamentary Group
Vox, Juan José Liarte, denounced the “competence model” in Spain and blamed it for much discussion and hardly any solutions to the environmental problem. Denounced as
«Chiringuito de la left» the collection of signatures to give the Mar Menor legal personality, supported by hundreds of “well-intentioned Murcians.” According to Liarte, this “star measure” seeks to create a “chiringuito” to place “socialists.”

For this reason, Liarte proposed to remove the problem of the Mar Menor from the “political brawls”, by creating a technical and scientific body, independent of “the interests of all, which is not subject to political pressures or to the balances and imbalances of the parliamentary majorities ». He believed that the solution to the problem of the salty lagoon passes through
avoid any type of spillage and by the drainage of the aquifer, dispensing “as much as we can and a little more” from the socialist central government, but always following the criteria of qualified technicians.

In her usual harsh tone, the spokeswoman for the Mixed Group and deputy of Podemos, María Marín, demanded the
declaration of the lagoon as a regional park to be able to regulate in six months all the uses in its environment. He did so after reviewing what happened there in recent years and accusing the regional government and Councilor Luengo of not having “lifted a finger” to solve this problem, after reminding him of his
“Kinship” with one of the “great landowners of Campo de Cartagena”. Luengo considered that this statement bordered on defamation and thus reproached him after making a fiery defense of his honesty. Marín also attacked the agribusiness and its ‘lobbies’, for which he asked the PSOE for “courage” to go against them. “That handful of landowners do not represent the majority of our farmers, honest hardworking people” whose image is also affected by what is happening. “We have to recover the traditional agriculture that always existed next to the Mar Menor,” he claimed. Marín concluded his intervention
calling for the resignation of Luengo, to which he gave a container containing brown waters and dead fish from the Mar Menor.

The spokesman for the Citizens Group, Francisco Álvarez, reproached Marín for the “dramatization” of his speech, because “that will not solve the problem of the Mar Menor.” As a representative of the four liberal deputies who support the Government of López Miras, Álvarez defended the Executive’s management in the last anoxia and highlighted the technical complexity when intervening in the lagoon. “Enough of passing the buck to each other,” asked the deputy to the different administrations, before
defend the agriculture of Campo de Cartagena and demand the execution of the Zero Dumping Plan which the central government rejects as outdated.

“The Mar Menor needs fewer words and more commitment, concrete actions, items in the General Budgets and more action by everyone,” said the spokesman for the Popular Group, Joaquín Segado. In his opinion, the situation of the lagoon has been used
as a throwing weapon by the left-wing parties against the regional executive and against agricultural companies. “It is immoral that the parties that support the Government of Spain defend their failure to act with respect to the Mar Menor, when we have been asking them for years to assume their powers, to act on the aquifer, on the spills, on the boulevards, to name a person in charge politician who is in charge of coordinating the actions of the different administrations, who starts the Zero Dumping Plan and his response has always been none, “he said.