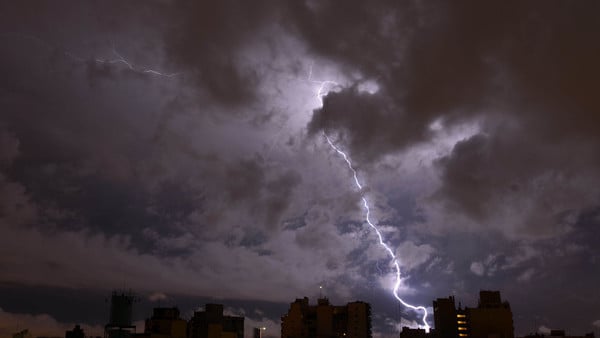 The National Meteorological Service issued this Tuesday a red level alert by storms with strong gusts of wind and possible hail fall in northern Patagonia, which will be in effect tonight and early Wednesday morning. There are also warnings of less intensity – orange and red level – in the region.

The highest risk warning applies to the east of the Neuquén province (includes Neuquén Capital) and the west of Río Negro.

“In this area it is possible that the accumulated rainfall throughout the event reaches values between 70 and 110 mm on average, but they can be overcome locally. This situation can cause emergencies since these values ​​far exceed the normal precipitation for the whole month, “the SMN detailed in a statement.

Some areas are already being affected by heavy rains. In Neuquén, for example, hail fell and workers at the largest hospital in the province – Castro Rendón – showed videos of how the health center was flooded.

Storm in Neuquen!
And so is the HPN, the most complex in the province!
The Government of the MPN and those who discredit our struggle have no idea what it is to work under these conditions.
Rebellion on the roads, in the streets and in hospitals in defense of public health! pic.twitter.com/sYUgVZCfsN

The forecast anticipates that from the afternoon of this Tuesday storms will form in western Patagonia and Mendoza, which will then spread to the entire area under alert.

“It is possible that very significant rainfall values ​​will be registered towards the end of the afternoon and during the night, as the low pressure system associated with these events moves slowly from the mountain range,” they reported from the SMN.

Beyond the areas affected by the greater intensity of the storm, the agency issued an orange level alert for storms for much of the province of Mendoza, the west of La Pampa and the east of Río Negro. In these sectors it is possible that the rains are between 40 and 90 mm.

On the other hand, the center of La Pampa, the east of Chubut, the northeast of Río Negro and the northwest of Mendoza are under alert for yellow-level storms (between 15 and 40 mm expected).

There are a series of recommendations issued by the National Meteorological Service, which are supplemented as the alert level rises.

WhatsApp will have a new feature for deleting messages

Quiniela de Santa Fe: result of the draw for the First today, Thursday, May 06