“Record Numbers” for Sharjah in “Champions” 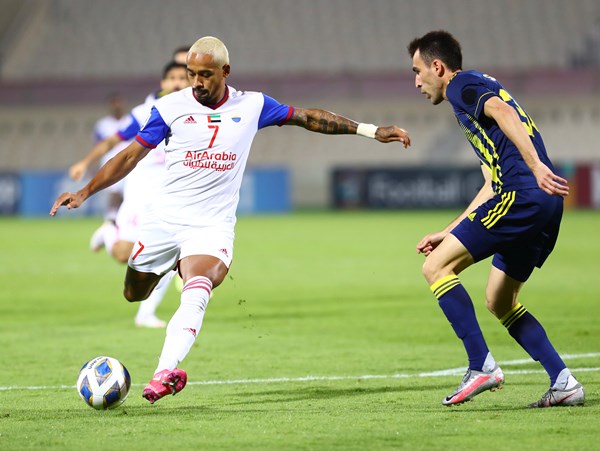 Sharjah hit several birds with “one stone” in the AFC Champions League, with the end of the group stage, “3 rounds”, when the team imposed itself on top of the second group worthy of “7 points”, which is a record in the history of the participation of “the king” who collected This number of points, in the first 3 matches, and he inflicted the first defeat in Pakhtakor this season, after he fought 5 matches in the Uzbekistan League “5 wins”, in addition to a draw in two matches in the AFC Champions League.

In addition, the high technical condition, despite the absence of Igor Coronado, one of the most prominent players, and the great brilliance witnessed by Brazilian Caio Lucas, who twice won the title of best player out of 3 matches played by “the king”, and with him Khaled Bawazir also in the same version, which is what happens For the first time in the continental journey.

Khaled Bawazir sits on top of the team’s scorer with two goals, in addition to his wonderful performance, and it seems that he has become a player specializing in Asian competitions, just as he starred in the “version of 2020”, and as Salem Salih made his Asian mark with a goal in Pakhtakor’s net, and is considered the first with “the King” continental, With confirmation that he scored 4 goals with Al-Nasr and Al-Wehda in the 2011 and 2016 editions.

Sharjah was able to achieve the biggest victory for an Emirati team over an Uzbek competitor 4-1, as if he had become the specialist in historical victories, as he had previously outperformed Al Hilal Saudi Arabia 5-2 in the “2004 version”, Saudi cooperation 5-2, and Al-Duhail Qatar in 2020. Indeed, the most positive point is the liberation of the players on the field and the return of the collective spirit in the performance.

It is striking in Sharjah and the last match “the best example” that he did not possess much of the ball, with evidence that Pakhtakor controlled 70% compared to 30% for Sharjah. However, Abdulaziz Al-Anbari succeeded through his plan and the players’ implementation of it accurately, especially in light of the presence of an attacker and a dodger of the size of Caio. Lucas, in making the opponent’s possession a means of hijacking counter-goals, and Sharjah’s shots are 9 times, including 5 effective balls, compared to 17 attempts by the Uzbek team, including 5 effective balls. Muhammad Abdul Basit is considered the “king of tackles” by 8 times, and Caillou is the “king of quirks.” Successful, and also the most successful industry for 3 opportunities.

Amid this great momentum of royal positives, Abdulaziz Al-Anbari affirms that the broad victory over Pakhtakor will not stop for long. He said: I hope the players will not be hit by a “trick”; Because the opponent is looking for his rehabilitation in tomorrow’s match in the fourth round, and therefore we have to be completely wary of the Uzbek reaction, which I expect is strong; Because it is a team that has a lot of experience in the AFC Champions League, but in any case we are ready to honor Emirati football, and move forward towards achieving our ambitions, and there is still a long way to go in the tournament. He said: I thank the players for their great commitment to what is required on the field, and it is necessary to thank the Football Association for giving him the appropriate opportunity for my team to prepare his Asian papers appropriately.

For his part, Caio Lucas said: I am very happy with this wonderful appearance for my team, and we are together in “one compound”, scoring or making goals is a distinguished team work, and all of my colleagues helped me a lot, and we studied the opponent and gave the victory to the players. I did my best and I will continue to do so. In the rest of the games. Pakhtakor coach Peter Huestra said: Caio Lucas made the difference beautifully with Sharjah, where he did everything, and my team missed the lack of Masharipov, the current Al-Ahly youth player, who has great experiences and capabilities, and Sharjah’s chance is the best to qualify after 3 rounds.

Health will begin this week the vaccination of 213,256 Murcian between 50 and 59 years old