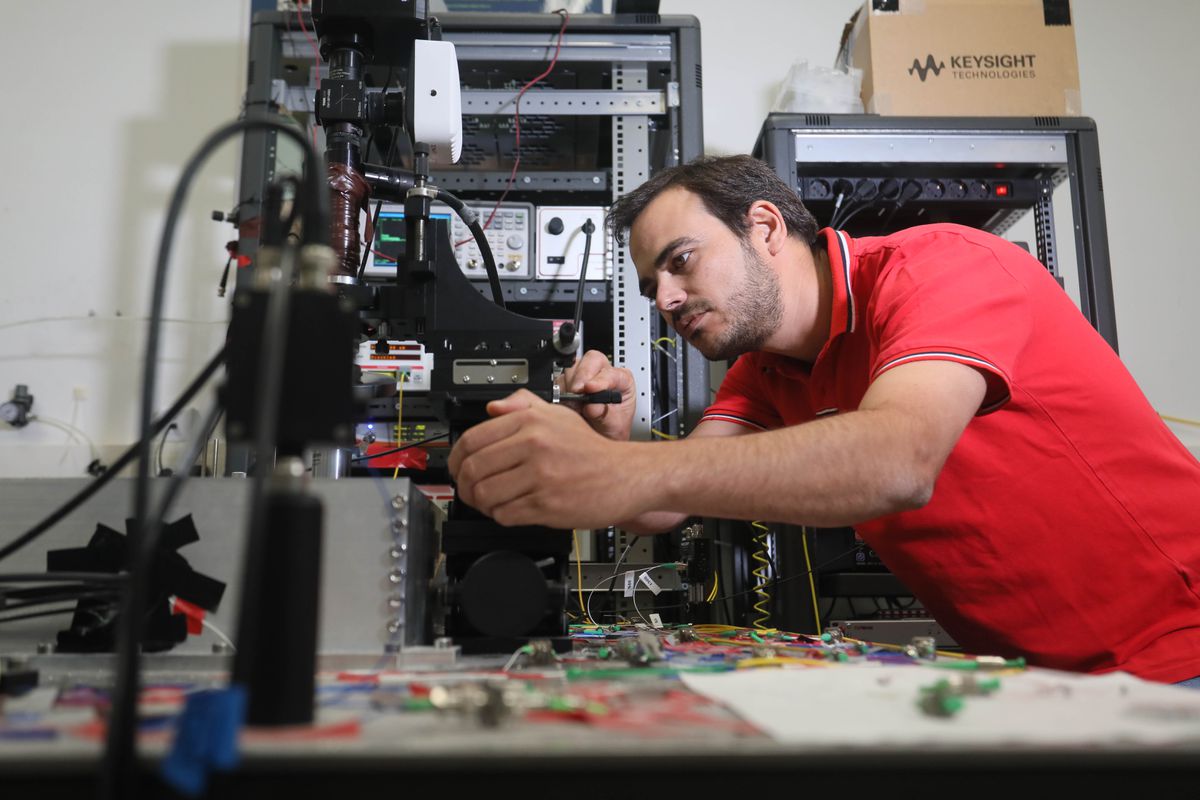 Two years ago, the researcher Eduardo Gil Santos (Lugo, 37 years old) patented a technology that made it possible to recognize any bacteria based on the vibrations they emitted. The frequencies of these waves vary according to the size or mechanical properties of each bacteria, which makes each one have a distinguishable pattern. “It’s like listening to them, in a sense, even though they don’t make a sound that is perceptible to the human ear,” says Gil. The objective now is to expand the capabilities of this machine so that it is also able to distinguish the waves emitted by viruses, such as the one caused by covid-19.

The original project emerged about five years ago, just when the researcher returned from France after completing a post-doctorate at the Paris-Diderot University, currently University of Paris. “The idea was always to focus on the detection of infectious diseases,” says Gil. In between, the pandemic emerged, forcing efforts to be condensed into a single disease. Before that, the researcher had been developing mechanical sensors for different biomedical applications for another ten years. “It is not a project that came out of nowhere. We have been working on this for a long time, moving towards the detection of increasingly smaller biological entities ”, summarizes the researcher at the Institute of Micro and Nanotechnology, dependent on the CSIC.

The goal now is to detect viruses, microorganisms ten times smaller than bacteria and that vibrate thousands of times faster than bacteria. According to the simulations carried out by the researcher, size will not be a problem, since the optomechanical sensors of this device are also capable of capturing these waves. The short-term plan is to adapt it to the virus that causes covid-19 in order to detect it quickly, accurately and without performing invasive tests, such as PCR or antigen tests. “We will be able to detect SARS-CoV-2 viral particles immediately by going to a clinic and only with a puff,” explains Gil.

The goal is to detect viruses, ten times smaller than bacteria and vibrating faster, although simulations indicate that the sensors are also capable of capturing these waves

The project will be financed with one of the Leonardo scholarships awarded by the BBVA Foundation, of 40,000 euros each, and lasts a year and a half. In this case, Gil was one of the 59 researchers (out of more than 1,200 applications) awarded in the eighth edition. “It is a proof of concept. We will take it to the clinic if the project is successful, although for that we would need more funding to set up a company and transfer this laboratory work to a final product ”, he says optimistically.

By the time this first stage is over, it is possible that the coronavirus pandemic is in a regression phase, but in the long term, this test will be able to detect any type of virus. Currently, in hospitals, patients are examined and, depending on their symptoms, one or more tests are carried out to rule out whether or not they have contracted a certain virus, until the cause of the disease is found. “This leads to a delay in the diagnosis and a delay in the patient receiving the appropriate treatment, which in the end can end, unfortunately, in the patient not receiving the treatment on time,” he says. With this new technology, a single test will suffice, the results of which are obtained in just a few minutes. “There is no technique that is capable of diagnosing any type of infectious disease without the need to assume what disease a patient has,” he says.

Last February, in countries such as Indonesia, a similar alternative began to be used to detect covid through breath, but they don’t work exactly the same. A single breath of air from the patient in question is enough, although the results are based on artificial intelligence to provide the results. These tests, cheaper than a PCR, are more than 90% accurate, although they can only diagnose cases of covid-19.

Gil Santos is confident in the doors that this technology can open, despite the fact that it has not reached the market and has been used in laboratories on a specific basis: “The variety of diseases to which we can apply these devices is very wide.” Beyond the identification of viruses and bacteria, its applications range from DNA analysis to tumor detection. “We also wanted to work on the detection of specific DNA sequences of a genetic disease or, with other types of optomechanical devices, to be able to distinguish healthy cells from tumor cells and therefore guide it to the detection of cancer”, he resolves.