“Reckless” greet their acquaintances with “Are you afraid of Corona?” 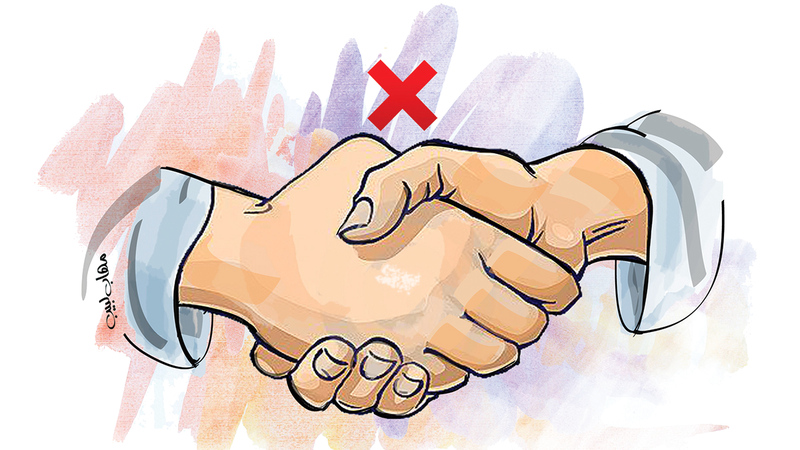 Citizens and residents confirmed the presence of reckless acquaintances, relatives and friends in their surroundings, negligent in the precautionary measures applied to limit the spread of “Covid-19”, and insisting on shaking hands with the hand, sniffing, taking off the mask and ignoring the safety distance, indicating that they hear in the councils repeating the phrase “After you is afraid of Corona?” To reduce the importance of precautionary measures.

And the competent health authorities in the country continue to warn against complacency in following precautionary measures, and from irresponsible behavior that would create “fertile hotspots” for transmission of infection, and double the chances of infection with “Corona.”

Abu Rashid said that he observed some of his acquaintances neglecting the precautionary measures, after vaccinating a large proportion of members of society, pointing out that he was surprised by some people’s hesitation that they were not afraid of infection with “Corona”, on the pretext that they were all vaccinated and received two doses of the vaccine.

He added that there is a misconception that vaccination against the virus is a justification for negligence in adhering to preventive measures, such as sterilization, distancing, wearing a muzzle, and others, stressing the importance of intensifying awareness campaigns within society to limit the spread of the Corona virus.

Abdullah Ahmed agreed with him, who said that there are reckless people who ignore the warnings issued by health authorities regarding adherence to preventive measures, noting that one of his friends was angry with him when he refused to embrace him, but he understood the situation when he explained to him that this procedure was in order to preserve his safety and not cause the transfer of Infecting others unintentionally.

Muhammad Othman believed that the problem lies in the lack of awareness among some of the importance of continuing preventive measures, “there are people who have been infected after vaccination.”

He continued, “The Corona virus still poses the greatest threat facing societies around the world,” stressing that “the negligence of some in the precautionary measures is often faced with rejection by those around them,” and that “the extra reassurance of some that they are not likely to be infected has no place or support from The truth,” calling for the continuation and intensification of awareness campaigns to reach a society free of infection with “Covid-19.”

The competent authorities in the country are continuing their efforts to raise awareness of the precautionary measures to limit the spread of the virus, as they call upon members of society to cooperate and abide by measures to confront “Covid-19”, stressing that public health is a priority and social responsibility, and community solidarity is an indispensable necessity, in addition to that observing the instructions is a legitimate duty. A patriot guarantees safety and leads to recovery.

Doctors warned against complacency in precautionary measures, as complacency is a major link in the spread of the Corona virus, noting that “irresponsible behaviors cause the failure to reach a full recovery from the virus, due to its transmission to others, especially the elderly and those with chronic diseases.”

It is reported that the World Health Organization recommended continuing to apply precautionary measures, especially wearing masks, physical distancing, washing hands, and not gathering in large groups for people who have received vaccinations against the Corona virus, especially in light of the lack of sufficient information about the period of continued immunity resulting from vaccines. .

• Vaccination does not justify negligence in adhering to preventive measures.