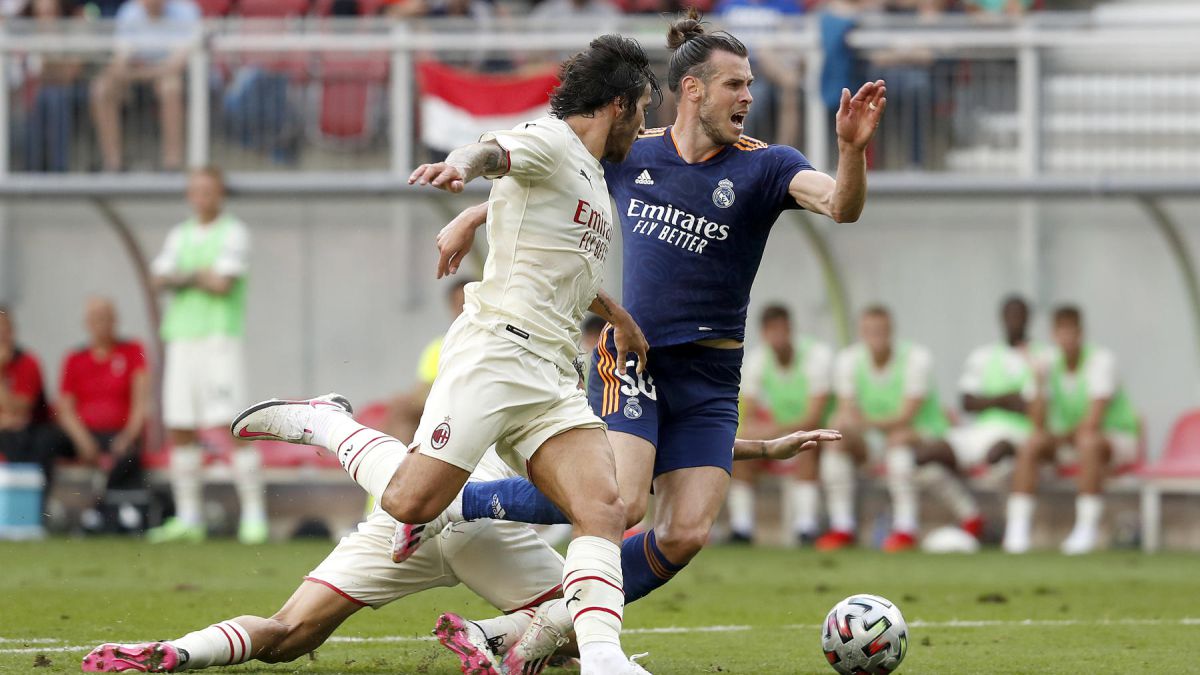 Courtois: First 45 minutes of preseason and clean sheet. Milan hardly demanded him. His clearance in a center of Theo, his most outstanding intervention. He was replaced by Lunin at halftime.

Lucas Vazquez: In the early stages of the game he was overtaken by the speed of Rafael Leao and that inhibited him from joining the attack further.

Nacho: Sobriety, seriousness and efficiency. Well placed moment and fast when it came to regaining possession. He beat Calabria a sprint of 30 meters to cut one against Milan, but the referee understood that the squad was missing. He was in charge of getting the ball out at the start of the Ancelotti team.

Praise: The protagonist of the party. For his debut and for what it meant to play with the Real Madrid shirt against his compatriots. He was comfortable in defense and dared to do some work in attack by taking fouls. He had the opportunity to score shortly after half an hour into the game with a left foot that Maignan repelled. He was replaced by Militao at halftime.

Marcelo: With the internships of Saelemaekers something similar happened to Lucas Vázquez and his participation in attack was diluted. Good anticipation to avoid a point-blank shot from Brahim on 16 ‘. He was replaced by Miguel Gutiérrez at halftime.

Modric: The Croatian’s discreet match before a dedicated audience, perhaps due to the presence of many compatriots given the proximity to Klagenfurt. He did not risk in the distribution. He smashed a right hand off the crossbar on 52 ‘. Cheered when he was replaced by Odegaard in the 60th minute.

Casemiro: Much less presence than what is usual in him. It was noticed that the preseason is starting. In the penalty he acted as captain (the bracelet was worn by Marcelo) and handed the ball to Bale for the Welshman to execute the maximum penalty. He was replaced by Blanco at halftime.

Isco: It makes him want to, but also too much pause, although he shows progress. He was replaced by Victor Chust in 84 ‘.

Bale: In the first half he had ten hopeful minutes for Real Madrid, with a couple of shots. One went outside after brushing against Maignan and another went too high. He caused the Calabrian penalty that he himself executed, but stopped the goalkeeper from Rosario.

Jovic: He improved compared to the game against Rangers, in which he went unnoticed, but his participation barely had an impact on the Madrid game. As an outstanding action, his was the deep pass to Bale that led to the Welshman on a penalty.

Rodrygo: Again the Madrid player who gave the most sense of danger. Good runs down the left wing, looking for the shot and details: he tried a scissors in a corner.

Lunin: (Entered by Courtois at halftime). Worthwhile save from a shot by Brahim on 65 ‘.

Militao: (Entered by Alaba at halftime). Solid in defense and participatory in attack.

Miguel Gutierrez: (He entered for Marcelo at halftime). Good second part of the youth squad. Very solvent. Ancelotti experimented with him indoors in the final minutes, after removing Isco.

White: (He entered for Casemiro at halftime). The game was not conducive to being seen much. He did well when it was his turn.

Vinicius: (Came in for Bale at halftime). He gave the afternoon to Calabria with his speed.

Mariano: (Entered by Jovic at halftime). It brought another air to the attack. He was fierce and played the game well to allow greater mobility for Rodrygo and Vinicius. Good work.

Odegaard: (He came in through Modric at 60 ‘). The Norwegian went almost unnoticed in the half hour he played.

Marvin: (He came in through Lucas Vázquez at 69 ‘). Correct playing as a winger again.

Arribas: (He came in through Rodrygo at 69 ‘). He brought verticality and speed to the game of Ancelotti’s men. He had it to give Madrid victory in 87 ‘. Meritorious status is getting too small for him.

Victor Chust: (He came in for Isco in 84 ‘): The youth squad did little in the minutes he played.