Real Madrid and Manchester City to the quarter-finals 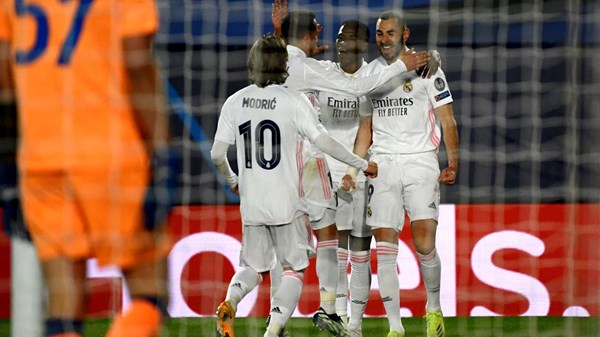 Real Madrid and Manchester City reached the quarter-finals of the European Champions League without any trouble after renewing their first-leg wins over Italian Atalanta and Borussia Moenchengladbach 3-1 and 2-0, respectively, on Tuesday.
In the Spanish capital, Real Madrid renewed its victory over its Italian guest Atalanta 3-1 in the second leg of the Champions League final, after it won the first leg with a clean goal, and booked its seat to the quarter-finals.
For the Madrid club, French scorer Karim Benzema (34), captain Sergio Ramos (60 from a penalty kick) and Marco Asuncio (85) scored for the club. And for the Colombian loser, Luis Muriel (83).
After two disappointing seasons at the continental level, French coach Zinedine Zidane led his team to the quarter-finals, after he had previously won, under his supervision, the title of the oldest European competition for 3 consecutive seasons (2016-2018).
Zizou did not succeed in skipping the final price of the European competition since his return to the “Santiago Bernabeu” in March 2019, where he lost against Ajax Amsterdam in that year, and then against Manchester City in 2020.
Manchester City maintained the dream of winning the quartet during the current season by renewing its 2-0 victory over Monchengladbach, which was scored by Belgian Kevin De Bruyne (13) and German Ilkay Gundogan (18) to reach the quarter-finals in turn.
City largely secured the Premier League title, reached the League Cup final and will play the England Cup quarter-finals against Everton next Saturday.
It is also the fourth time in a row that Manchester City reached the quarter-finals of the most important continental competition, but it failed to skip this role in the last three seasons and the exit was at the hands of Liverpool, Tottenham, the English and Lyon, respectively.

Tony Succar remembers his time at university: "He was the worst musician"