Raw materials The war has raised the price of almost everything possible, and the fighting threatens to cause a food crisis – thus Russia’s attack raises the price of raw materials 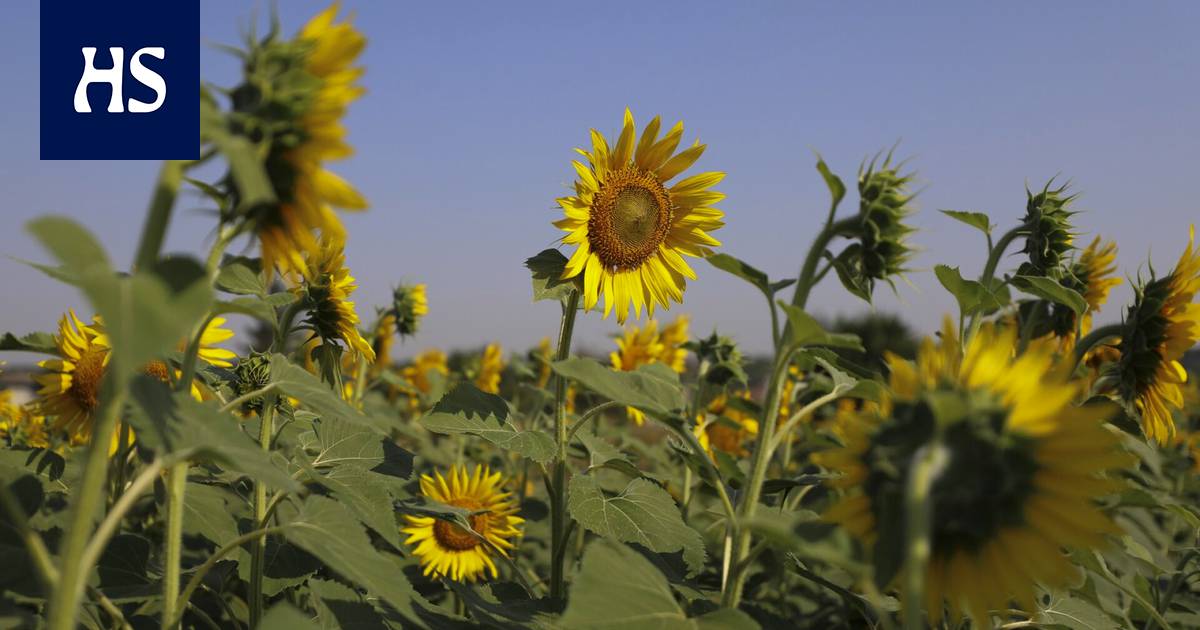 “Take it these seeds so that sunflowers can grow here when you die. ”

The Ukrainian woman said words to a Russian soldier and cursed the soldiers who had invaded their homeland. The fate of the cursed men is unknown, but Ukraine’s national flower has meanwhile become a global symbol of resistance, unity, hope and peace.

Sunflowers bloom in social media updates, anti-war and pro-Ukraine protests, and the wife of the US president Jill Biden face in the mask.

Before the war, sunflower has also been a major source of income for Ukrainian agriculture.

The invasion of Ukraine, known as Europe’s grain barn, and a large-scale war are affecting food security in many countries very quickly, says a researcher at the Natural Resources Center (Luke) Hanna-Maija Karikallio.

“It is causing great damage, especially in African countries, which have imported a lot of grain, especially from Ukraine. There are some stocks, but this year is going to be hard. There is a big food crisis in sight in these countries, ”says Karikallio.

In Lebanon and Libya, more than 40% of the wheat consumed comes from Ukraine. Ukrainian wheat is also bought in particular by other countries in North Africa and the Middle East, Indonesia, Bangladesh and the Philippines, but also by the European Union.

Exports from Ukraine are restricted by warfare and sanctions and boycotts affecting trade with Russia. Last week, wheat futures prices rose more than 40 percent, an all-time high. Corn and soybean prices are also at their highest since September 2012.

World half of sunflower oil exports have come from Ukraine.

Warfare has halted exports. It is already visible on the market as higher prices for raw materials to replace sunflower oil. Russia has also been a major producer of sunflower oil, accounting for about a third of world exports.

According to FEDIOL, an association representing the vegetable oil industry, around 200,000 tonnes of sunflower oil are usually imported into the EU from Ukraine every month.

About 35-45% of all sunflower oil imported into the EU comes from Ukraine. According to the association, the available oil stocks are sufficient for about 4-6 weeks. If availability problems persist for longer, consumers will also see product shortcomings.

The industry is working to reduce the effects of the war by using a limited portion of its sunflower oil as a feedstock for biodiesel, including in the food market, Reuters reports.

A mine warning sign had been brought to a field in early March where wheat and corn were growing before the war. Nizhny Ukraine is located about 130 kilometers northeast of Kiev. Locals have a mixed attitude towards mines. Picture: Aris Messinis / AFP

Competitors in sunflower oil are soybean oil and palm oil. The price of palm oil has risen sharply since the beginning of the war.

“At present, sunflower oil is not really a substitute for anything other than palm oil. That is a very bad thing in terms of sustainability. As the situation continues, we need to think about what other solutions would be available, ”says Karikallio.

India has asked Indonesia to increase its palm oil production to replace sunflower oil. About 13 percent of India’s cooking oil was imported from Russia and Ukraine last year.

In the edible oil market, prices would fluctuate even without war. In South America and Canada, the weather during the harvest season has been unfavorable, which has cut the supply of soybean and rapeseed oil.

At the end of January, Luke estimates that the price of food in Finland will rise by about 2–2.5 percent this year. That would have meant an annual increase of around € 100 in the food expenditure of a median-income household. Now the forecast seems moderate.

“The effects on Finland come from the fact that the price of grain is rising globally. Prices are sure to go up. The rise in production costs has already been seen before this crisis, which is accelerating it even more, ”says Karikallio.

Raw materials tilting is not limited to food.

The prices of raw materials for heavy industry have also risen to their highest levels in years. Russia is a large oil and gas producer, which has been reflected in the slump in world oil prices.

Russia accounts for 7.2 per cent and Ukraine for 3.8 per cent of world exports of semi-finished and finished steel products. In the worst case scenario, therefore, about one-tenth of exports of steel products may come to a standstill.

See also  Music | At the Korsholma music festival, an opera that takes a stand on forestry will be heard in the jubilee year

In addition, more than 40 percent of the world’s palladium comes from Russia. This precious metal is used in automotive catalysts and its price has started to rise sharply during the war.

In addition to palladium, the prices of gold, silver, aluminum and nickel, for example, have also risen sharply.

Real the effects of rising prices, the scale of the food crisis and the disruption of the world economy depend on the duration of the war.

The war is already known to affect the spring sowing of corn and sunflowers in Ukraine. The cancellation of the crop prolongs the difficult situation.

“It seems that there is little to sow in Ukraine and this year’s crops have been largely lost. The question is what is happening in the poor countries that are threatened by the food crisis, ”says Karikallio.

Read more: A vicious spiral paralyzed the world economy 50 years ago. Due to the war in Ukraine, its recurrence is again close.

Read more: The effects of the war on the economy will soon be visible – According to Minister of Finance Saarikko, a time of slow growth and high inflation may lie ahead

Twenty dead and thousands evacuated by floods in Australia